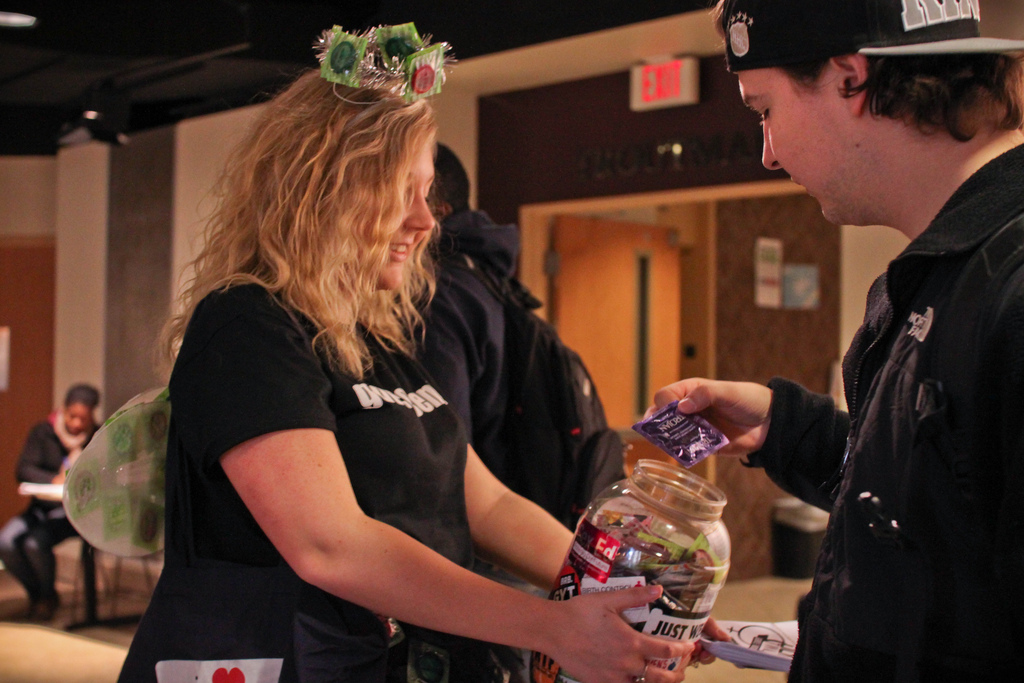 Proudly parading her tutu, wings and a headpiece covered in condoms, Adrian freshman Ashlea Phenicie handed out condoms to students in the Towers Wednesday, April 24.

Phenicie, who is the Public Relations Chair of Voices of Planned Parenthood (VOX), dressed up as the “Condom Fairy” in hopes of encouraging students to learn safe sex practices and attend the upcoming Sextival. Sextival is a yearly event sponsored by VOX and its goal is to raise sex education awareness. The event was April 25 from 11 a.m. to 3 p.m. at Finch Fieldhouse.

“Sextival is like a sex-education festival,” Phenicie said. “We have condom races, a craft station to make condom holders and we even invite other RSOs to set up tables and sell things, but a portion of it has to go to a women’s aid shelter.”

The main goal of the event is to reduce the amount of unplanned pregnancies and Sexually Transmitted Infections (STIs).

In years past, the “Condom Fairy” was only seen during the week of Sextival; however, VOX plans to increase her appearances on campus to once or twice a month. The “Condom Fairy” also has a twitter account where students can tweet or privately message her and receive free condoms.

“I’m really passionate about reproductive rights,” Phenicie said. “I think it’s very important that women have access to birth control and can control their reproductive lives.”

Phenicie says VOX is a great group of women who are very close and supportive.

“We are very much like sisters. A lot of people don’t know other feminists, and it’s nice to find a place with people that care about the same things you do,” she said. “Sometimes when talking about reproductive rights a lot of people are uncomfortable with it, but it’s nice to find some people who will work towards this cause with you and aren’t uncomfortable with it.”

The “Condom Fairy” has had both positive and negative reactions from students.

“Some girls are really excited when I come to their door and they’ll freak out and call their roommates to come see me,” she said. “But sometimes it’s not so great. One guy slammed the door on me.”

Despite the negative feedback and strange stares, Phenicie says it’s been mostly positive. She’s already given away a couple hundred of condoms to male and female students. Normally, VOX has tables set up with condoms for students to grab, but many are too uncomfortable to take them. Phenicie says going to the students’ doors helps.

“I definitely think I’m making a positive impact on campus,” she said. “Anything that prevents unplanned pregnancy or an STI contraction is a great thing.”