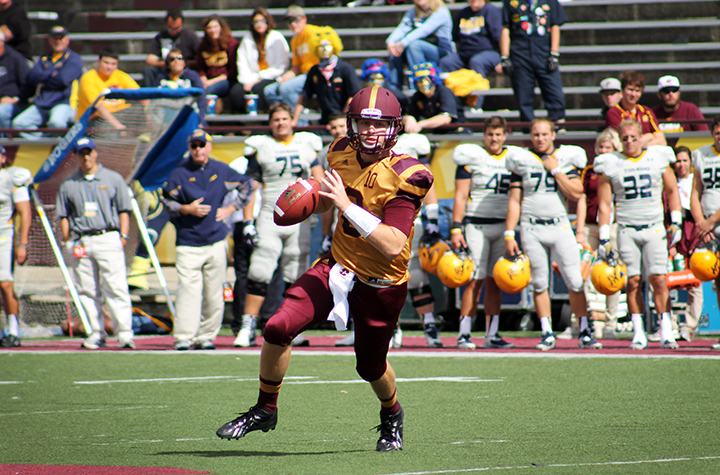 Central Michigan (2-4, 1-1) got its first win against Football Bowl Subdivision competition on Saturday, beating Miami (Ohio) 21-9. It is a step in the right direction for Dan Enos and company but the upcoming schedule leaves no time to savor the victory.

On Oct. 12 Central Michigan again takes to the road against Ohio University (4-1, 1-0). The Bobcats will bring an offensive attack against Central Michigan that can beat you through the air and on the ground. Led by senior quarterback Tyler Tettleton and a two-headed backfield featuring senior running backs Beau Blankenship and Ryan Boykin.

Tettleton has thrown for eight touchdowns and over 1,000 yards so far this season, with only three interceptions. Blankenship has two touchdowns with 246 yards on 65 carries, Boykin has scored three times with 222 yards on eight less carries.

Central Michigan will have its hands full with Ohio though, as the biggest issue going forward will be not beating themselves. Consistency remains the biggest concern for the Chippewas moving forward as the offense still searches for its identity. Cooper Rush is 1-3 as the starting quarterback and has seen his passing yards decrease in every game since entering against New Hampshire on Sept. 7.

In the win over Miami (Ohio) Rush was once again ineffective; throwing an interception on 11 of 20 passing with 110 yards. Over the past few weeks some of the blame could be pointed towards Saylor Lavallii and the rushing attack, which has added to the ineffectiveness of the passing game. Then Lavallii ran for two touchdowns with 151 yards on 25 carries against Miami (OH). He delivered the type of performance that should have opened up the passing game, yet it remained flat.

Rush has thrown eight interceptions to three touchdowns in his four starts, which is not the player that was seen bursting onto the scene on Sept. 7. The young quarterback is not letting people forget the fact that he is a freshman.

While a win is a step in the right direction, this was not the confidence inducing moment that Central Michigan needed. Rush passing for 110 yards and only connecting with Titus Davis three times is a troublesome sign—especially when examining the quality of opponent.

Central Michigan’s next three opponents (Ohio, Northern Illinois and Ball State) are currently all undefeated in the Mid-American Conference and hold a combined record of 14-2. For Central Michigan to hang with Ohio on Saturday, Rush will need to get the ball moving through the air.

If Rush is going to take control of this offense and turn this season around, he has to start this weekend.  At some point he has to show signs that he can run this team.

These next three games are going to make or break the season for Central Michigan. Rush has done nothing to earn a lock on the starting quarterback position, especially considering that Alex Niznak lost the job after just three drives. Rush has been allowed a much longer leash.

This program needs to break out of the thought process that stability equals success.

Enos has stuck with Rush because of the way he performed against an FCS opponent in New Hampshire, Niznak was thrown to the wolves against the University of Michigan and struggled mightily. It makes sense that you want to stick with a quarterback for the flow and stability of the offense, but 110 yards passing against a sub-par Miami (OH) team should not be viewed as a positive sign of things to come.

Rush has experienced an improved running game and has yet to make the leap that many thought he could. Injuries continue to pile up but that doesn’t mean that this staff can idly sit by and hope for things to fix themselves. Rush put up a valiant effort in not turning the ball over in the second half against Miami (OH) but it is going to take four quarters of mistake free football for Central Michigan to give Ohio or Northern Illinois any type of threat.