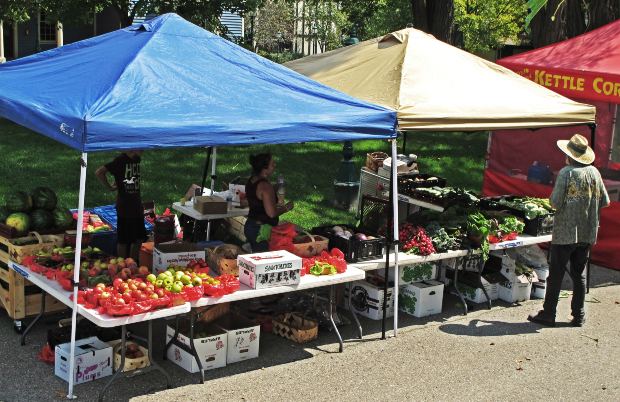 Abandoned houses and overgrown grass take over many parts of the city, along with withered remains of once prestigious buildings that remind us of what used to be there.

Detroit may look rough, but the city has a tradition that keeps people coming back week after week, and it all begins with a freeway exit packed with cars heading toward Russell Street. Detroit’s Eastern Market brings the city to life once again.

As many try to find parking spots, people bustle around the city with bags of beautiful flowers poking out and wagons filled with fresh fruits and vegetables wheeling behind them.

On Saturday mornings, people flock from all over to head to the outdoor urban market to get only the best food products from vendors.

Since 1891, six blocks of Detroit have been dedicated to the market, creating a unique shopping experience for people.

Farmers from all over Michigan, Ohio and Ontario head to Detroit to bring awareness to the great things being grown so close to home that are often hard to find in a supermarket.

The atmosphere is booming with the biggest variety in food, offering only blue ribbon quality and providing the best food in one spot.

At the Eastern Market, there more than 4,600 registered farmers selling products, with six sheds about the size of several football fields. The opportunities are endless.

In every direction, deals are offered on the freshest fruit.

“One dollar people, strawberries, one dollar!” shouts a fresh fruit vendor at one of the first stands.

As people move through the crowd, the vibrant colors of Pinter’s Flowerland flowers stand out near a shed.

Owners of Flowerland Diane and Bob have been at the Eastern Market for more than 19 years.  Many of their repeat customers love the personable customer service, such as replacing a pot that breaks and having a guarantee that their flowers will last longer than most stores.

Upon entering the shed, an assortment of honey and jams stands in a station without a fancy display. It may not get attention right away, but the quality of it could not be overlooked as repeat customer Cheryl says, “ If you want the real thing, they’ve got it.”

The owner of the products, James, an older gentleman, comes from Adrian to sell his jams and honey each weekend.

James learned his trade from his grandparents, who came on horse and wagon from Livonia in the 1890s to sell products at the Eastern Market.

“Done it all my life,” James said of the rich family tradition.

Having the Eastern Market in his family for so long has built up customer loyalty, which has created a more trusting bond with shoppers.

There are vendors such as James who has family that’s been there for over a century, but there are also new vendors with a great idea to sell.

“It’s organic, vegetarian and vegan,” says a monk who represents Living Zen Organics, talking about the kale chips they sell.

Many people were gathered around the stand, nodding with approval after trying samples. Living Zen Organics is a center run by monks who practice daily meditation, manual arts and work.

To help support the center, they introduced their healthy lifestyle at the Eastern Market by selling kale salad and chips — both of which boast high nutritional value.

One of the main things they wanted to gain by selling this is to support local farms to keep them sustainable. A big part of the monk tradition is treating the body right, and one way is eating healthy foods that the local farms can provide.

Nearby, another stand thrives with attention.

A man named Ken, who decided to bring an idea to life in 1995, mans his table.

Late one night in his kitchen, Ken decided he wanted a salad dressing with no sugar or vinegar. With a little inspiration and a blender, Ken created something worthy — a dressing he later named “Kenzoil,” which includes basil, garlic and spices.

Back at the market, bottles of the dressing constantly leave his hand in exchange for cash.

After people tasted his sauce on the samples of fresh cut French bread and sautéed mushrooms, it seems wrong for people to have it any other way.

“I first tested it out at a potluck party; people went crazy over it,” he said.

For about five or six years now, he’s come from Howell every weekend to give people the opportunity to taste something he whipped up on a whim.

Like Ken, many of the vendors had no intention of coming out with a product that would have such a positive response.

Free samples seem the best way to get to a customer’s heart, and many people love the “Pecan Dandy” from Ethel’s Edibles a couple stands down.

Jill of Ethel’s Edibles had no idea a recipe inspired by her grandmother would land her here. Containing all the essential ingredients such as butter, brown sugar and pecans, Edibles has also managed to make its desserts gluten-free.

“Everyone deserves to have good food,” Jill said.

With most of the country turning toward healthier lifestyles and caring about ingredients, this dessert is a healthier alternative.

Even local restaurants are picking up on how the Eastern Market gives businesses positive exposure, and Maria’s Comida has jumped on board.

Maria’s Comida is a family-owned Mex-Asian fusion cuisine famous for a salsa that people crave.

The restaurant believed that selling it at the Eastern Market would be a great way to connect with customers on a more personal level, instead of being just a jar of salsa on a grocery store shelf.

With the growing popularity of the original salsa, five more flavors were created to satisfy customers’ demands. Mild, roasted habanero, roasted habanero with mango, black bean with roasted corn and smoked ghost pepper are all offered through the restaurant.

The people of the Eastern Market are an important factor of what make this popular a century later.

Looking around, there are smiles on everyone’s faces.

James has been at the Eastern Market for more than three years and his favorite part is being able to talk to people.

“It’s a job, and on Saturdays here, I run into people who I haven’t seen in a long time,” he said.

There’s a sense of family here.

Many vendors of the market are in mutual agreement that being a part of a community that loves food as much as they do is a great environment.

This provides a great opportunity to exchange recipes, ideas and business opportunities within the community.

Other than the markets, the surrounding area thrives with independent shops, as the culture of downtown Detroit sends positive vibes through the atmosphere.

Shops such as Mootown offer ice cream with a historically inspired twist, featuring Saunder’s hot fudge and products, which originated in Detroit.

But, before diving into dessert, Supino Pizzeria next door has people outside waiting for a slice.

For Detroit, a city up its knees in poverty, having money poured into it is a great sign of a new beginning for the area.

The aromas on the street smell of rising bread, as Supino’s had a full shop by lunchtime. Supino’s, where the pizza is fresh all day, is a great way to end an adventure at the Eastern Market.

The wind gets cooler as 4 p.m. rolls around, and vendors begin to close up shop and sell the last of their produce for a bargain to the few customers left behind.

The site of perfectly ripe red tomatoes picked from the farm slowly fade away as closing time nears.

After going to the Eastern Market, a person knows what real food should look and taste like. And after an adventure here, a supermarket might prove to be a sore sight.

As vendors shut down and pack up, the presence of the now empty sheds only build anticipation for the next Saturday to come and another opportunity to embrace a century-old tradition.

Detroit, a city in progress, is making big steps by keeping a market tradition alive and welcoming new businesses to the heart of the city.