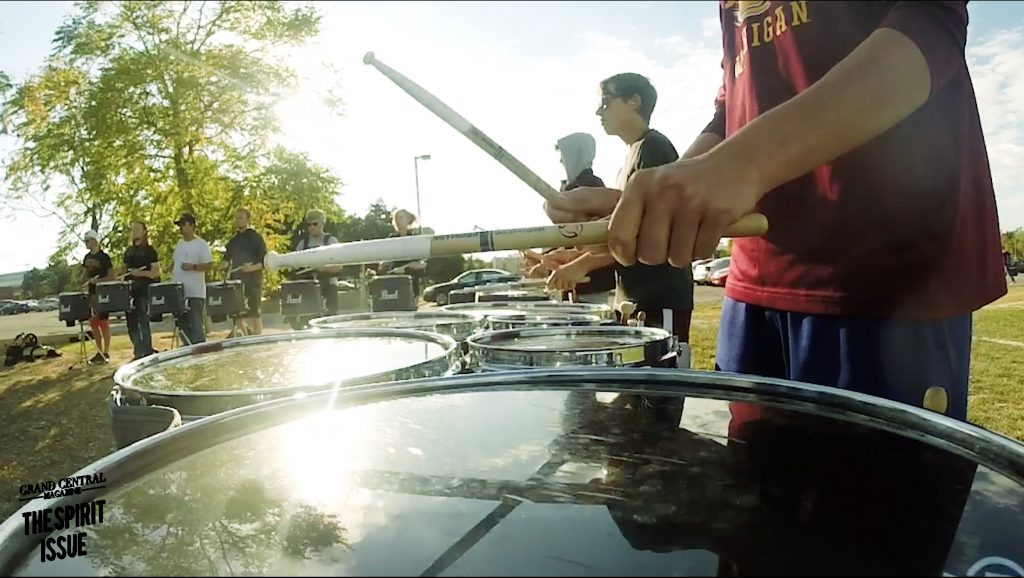 The Central Michigan University marching band has one of the most enthusiastically, fired up drumlines. They’re the pulse that drive the band into each and every football game. The drumline is like the glue of the marching band; they hold the tempo, keeping everyone in time.

In the video above, the drumline is shown playing the “Cadence Series.” They play this every football game as the band makes their way onto the field.

The drumline is made up of four sections each led by a rank captain: Cymbals – led by Victoria Bayer; Tenors – led by Nathan Thomas; Snares – led by Stephen Andrews; and Bass Drums – led by Camiel King. King is also the entire drumline’s leader.

Not only does the drumline practice every weekday for an hour, but they also get together to hang out and bond.

“We have this game that we made up a couple of years ago,” Scott Cole, a second-year bass drummer, said. “It’s called boomer ball, always a go-to game for us.” The game is played just like kickball, except instead of kicking the ball they hit it with a watercooler attached to a stick.

When they’re not having fun together, the drumming chips light up the halftime shows. They come together and play themed pieces from video games, TV shows and movies.

“Halftime shows are an opportunity for us to showcase both our musical abilities and our personalities,” Cole said. “For example, our music occasional calls for vocals, which means we all yell something together. During our first show, during the piece ‘Splattack,’ we all yelled ‘Squids ya’ during the piece.”

The Marching Chips will be performing before this Saturday’s homecoming game as well as during halftime with a special, thematic performance. Despite being in the back of the formation, the drumline marches forward with the camaraderie and spirit that keeps them drumming.