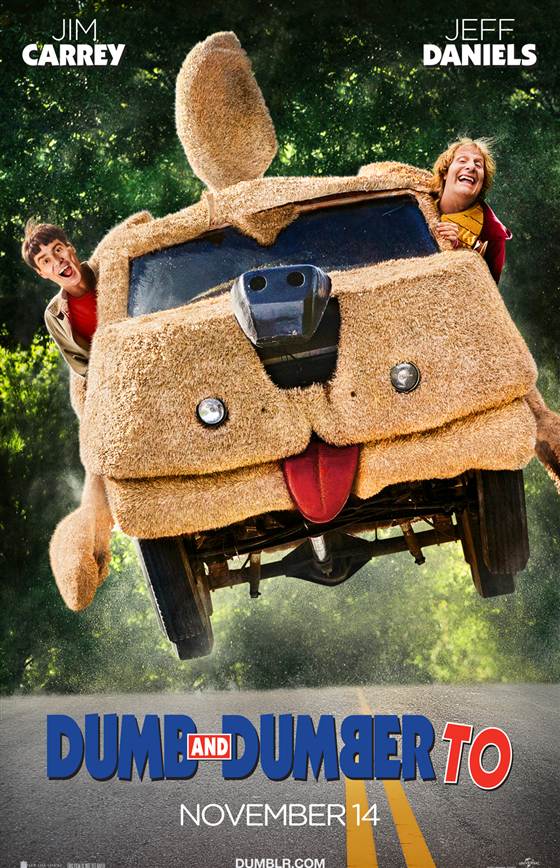 Let’s not deny the obvious here: The Farrelly brothers make movies for a very specific type of audience.

The type of people shuffling into “Dumb and Dumber To” more than likely fall into two categories: Those who share some affinity for the original film (which, even 20 years later, has sustained its status as a comedy classic), and those who can appreciate crude humor.

Even after reprising the Jim Carrey and Jeff Daniel roles as “Dumb and Dumber,” many fans of the Farrelly brothers have reached a negative consensus about these screenwriting brothers, after their 2011 film, “Hall Pass” didn’t reach expectations.

Paralleling that view, critic reviews coming in for “Dumb and Dumber To” have been predictably negative. Good news, however, for those who opt to ignore this: This film does not disappoint.

Comedy, of course, is all subjective, and not everyone who walks into this film will enjoy it. A significant portion may want to rip their hair out, but for those who have followed the brothers’ career up until this point – we can stop lamenting for the good ol’ days of “There’s Something About Mary” and “Kingpin” — these clueless characters are just too endearing.

The first film ended with Christmas and Dunne aimlessly walking down a deserted highway playing tag. “Dumb and Dumber To” opens 20 years later, with Dunne visiting Christmas at a mental institution. His devastation over the rejection from Mary “Samsonite” Swanson has apparently left him in a state of incapacitation.

Dunne, the loving friend that he is, has come by every week to take care of Christmas, but it is quickly revealed that Christmas has been faking his condition the entire time as one long prank on his best friend. Thus begins the first good joke of the movie and a solid summation of the mindset Peter and Bobby Farrelly must have had when writing this script: Try anything and everything to get a laugh.

That go-for-broke attitude ensures the jokes don’t stop for a second, and Dunne and Christmas have apparently dropped a few extra IQ points in the years since their first outing. The duo’s overwhelming stupidity is milked for all its worth – and then some.

Another shocking reveal surfaces: Dunne’s Asian parents adopted him, so he has no living relatives to donate a kidney for his pending operation.

Until, that is, he checks his mail and discovers his long-lost girlfriend Fraida Felcher has sent him a letter detailing a beautiful daughter, Penny, apparently conceived during their relationship. The two, once again, decide to set out on a road trip and find her.

Only a handful of scenes in this sequel don’t quite work (most of them shown in the trailer), but the laughs come consistently.

“Dumb and Dumber To” is a messy film, but messiness doesn’t exactly equate to laziness. It’s a well-constructed movie from beginning to end; its tone occasionally reminiscent of a Warner Brothers cartoon. The boys ride a zamboni through a tornado, crash an intellectual conference and mistake embalming fluid for slurpees (“Does it have aspartame?”).

This film is comparatively good-natured up against other studio comedies released this year. Still, for all its highs and experimental nature, the film may leave the Farrelly legacy a bit tainted.

In past efforts, the brothers excelled at balancing gross-out antics – it’s what they’re known for.

Though the original isn’t one of their deepest films, either (“Shallow Hal” or “Stuck on You” takes that title), it still was, at its core, an oddly touching movie about friendship. If this is a throwback to their golden days, it still feels like it’s missing a certain spark that made their best films classics.

As enjoyable as this film is, it still feels a little too late. Perhaps in the ’90s it would have broken the box office.

It seems only time will tell if “Dumb and Dumber To” will enjoy the same fandom that greeted the ’94 original, but chances seem unlikely.