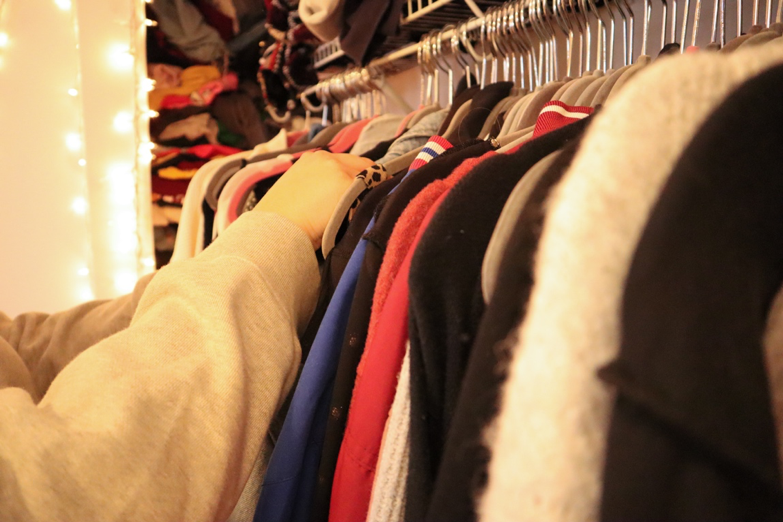 Story and photos by Ella Weidner

Two Central Michigan University students sat staring at the floor on a Tuesday afternoon thinking about why they don’t feel comfortable wearing crop tops or confident wearing the color tennis ball green despite loving the trends.

Lauren Leonard, master’s student in general administration at CMU, and Jordan Ross, family studies major and substance abuse minor student at CMU, were in their living room reflecting on why they are fearful to wear some of today’s most popular trends.

Noticing a lot of statement jeans and bright colors, Leonard opens up about how she separates herself from certain trends for her own comfortability.

“I like the neon green one on other people but not on me,” Leonard said. “I feel like it’s too bright[… ]Black is very slimming, but white and light colors pick at your insecure areas or are too tight where you’re like, oh my rolls or something.”

Honing in on her own insecurities, Leonard said that she stays away from certain trends to make herself feel beautiful, not because she is worried how others see her.

“It’s always in the back of my head but my first thought is what I think about it in terms of do I feel cute, do I like this?” Leonard said. “I would also say I’m not a big crop top person because I’m embarrassed, but also I just don’t like it on myself and just don’t feel good about it so I don’t do it.”

Stressing the point that she dresses to make herself feel confident, Leonard said that when she goes out to be glam and feel good, she isn’t going to put herself in a situation where she feels ugly. In other words, she wears what she’s comfortable in.

“If I’m not feeling good when I leave, I am just going to be grumpy,” Leonard said. “When you’re confident, you sit higher, you feel better, and you look better. So, what’s the point of being miserable and hiding.”

However, not everyone feels the same way. Ross said that her insecurities determine what colors she will or will not wear.

“Being very fair skinned, if the color makes me look even more pale, it’s something I am personally going to stray away from as an insecurity of my own,” Ross said.

Nervous to seem washed out or too pale, Ross chooses her colors carefully. For this spring season, that means no trendy bubblegum pink or tennis ball green for her.

While she limits color, Ross said wears what she feels is cute and doesn’t care about the opinion of others.

“There has been so many times where I cannot pick an outfit, and I know the ones I was trying on were cute but if I was not feeling it from head to toe, I was stressing,” Ross said.  “I would end up putting on something that I know three people voted against, but I ended up putting it on because I knew I felt good in it, so I wore it.”

Growing up in a private school, Leonard and Ross spent 15 years wearing a uniform where they didn’t have the choice to dress how they wanted. Ross says that plays a huge role and now they can wear whatever they want.

“You spent five days of the week in a skirt and a polo shirt and you looked the same as every other girl,” Ross said.

With a topic as sensitive as this, Leonard and Ross agreed it isn’t widely talked about. However, Leonard said that there has been recent movement in the right direction.

Offering plus size apparel was the first big step in allowing people to feel more comfortable wearing what they want Ross said. No one can talk about how they feel wearing certain things unless everyone is included.

“They can’t even have an opinion on it because they don’t get to wear it,” Leonard said. “You just feel more included from the get-go.”