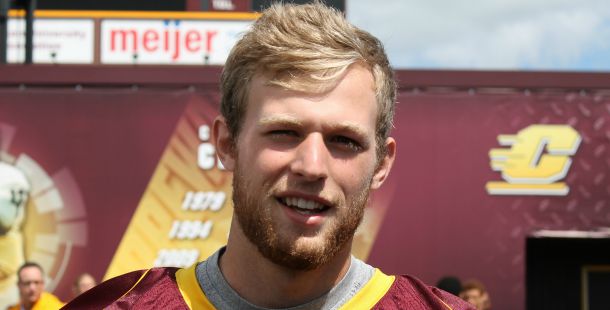 Central Michigan head coach Dan Enos has had naysayers since the day he took over the football program. I have been one in the past myself but it’s time to give credit where credit is due.

Enos knows how to build a team.

When you lose your starting left tackle, who just happened to be the No. 1 pick in the NFL draft, and you can still call your offensive line a strength the next season, you’re doing something right.

Jake Olsen leads the offensive line after missing all of last season due to a leg injury. Even with missing all but two games last year, Olsen has been named to the preseason All-MAC first team as he shifts from right tackle to left.

In addition, Central has the chance to have one of the best rushing attacks in the Mid American Conference in 2013. Not only is Zurlon Tipton returning for his senior season after rushing for 1,492 yards and 19 touchdowns, but Central has quality depth at behind the star halfback.

“Zurlon is an every down back, good pass blocker and a leader on this team. I expect him to be even better this year,” Enos said during Central’s Media Day on Aug. 13.

Not only will Central have one of the best running  backs in the conference but the team also has one of the most talented receivers in the country. Titus Davis has great size, speed and hands. The only issue with Davis has been his off the field behavior, as he was suspended for the Little Caesars Bowl last December.

“He (Davis) was young and made a mistake, he was punished enough,” Enos said. “Can you imagine sitting at home and watching the bowl game on TV, he was very humbled and embarrassed by it.”

Of course the biggest question mark coming into the season is going to be the play of recently anointed starting quarterback, Cody Kater. After beating out Alex Niznak and Cooper Rush for the starting job, Kater quickly must turn his attention to the Michigan Wolverines and 110,000 of their loudest fans on Saturday.

Any coach would love to have an experienced offensive line, a consistent running game and a go-to-receiver when he faces the prospect of starting an inexperienced quarterback.

Luckily for Enos, Kater has all of these things at his disposal.

Michigan enters Saturday as the No. 17 ranked team in the nation and is considered a heavy favorite against Central. The following are five things that Central must do if they want to put themselves into position to pull this upset off.

It’s as simple as that, control the ball and play at your own pace. Tipton is considered to be one of the better backs in the country, so let him go to work. If he can run with a purpose, find gaps and keep those chains moving, then he will have done his part in helping his team win.

Michigan is without its leading tackler from last season due to injury. Jake Ryan tore his ACL in offseason practice and is without question the leader and most talented player on the Michigan defense. Central must capitalize on this unfortunate opportunity.

No. 2 – Make Michigan quarterback Devin Gardner beat you with his arm.

Gardner came on very strong at the end of last season for Michigan but he has yet to play a whole season at quarterback in his collegiate career.

Michigan has three to four running backs that most teams would sell their souls to have in its backfield, so make the quarterback and his overly powerful arm beat you.

While Gardner has some experience under center for the Maize and Blue, Kater has only thrown four passes while at Central. He may have the talent and ability to eventually win games for Central but you do not want to put all your eggs in his basket in career start No. 1.

“I need to get more comfortable with the offense,” Kater said. “Being able to get a full year to learn this offense has been nice after having three playbooks in three years.”

Central must establish the run game if they want to experience any level of success on Saturday. The Chippewas should only pass the ball when they absolutely have to and instead give the keys of the offense to Tipton and only allow Kater to be the designated driver on occasion.

Lewan is a potential top five pick in the 2014 NFL draft and he may be head and shoulders the best offensive lineman in the nation. He is the type of player that can dictate the success of an offense.

Central needs to bring the fight to Lewan, if Central let’s him pick his spots then the Chippewas will never sniff the backfield.

Gardner’s arm can be a bit erratic and his receivers must feel like he is trying to break their fingers with how hard he throws the ball sometimes. The more you pressure Gardner, the less time he has to set up to throw a catchable ball.

Cliché? Yes, but it really is that simple.

This is the type of game that players will remember and talk about for the rest of their lives. It seems impossible but Central will need to get over the fact that there are over 100,000 people in attendance and at least 99 percent of them don’t give them a fighting chance against Michigan.

If Central feels like it belongs on the field with Michigan on Saturday then that is first big step towards putting themselves in position to win this game.

Michigan is bigger, stronger and more talented. With that said, football is very psychological game and it isn’t played on paper. Ask Chad Henne, Mike Hart and Jake Long about Appalachian State.

There is no better situation that allows Central to prove that they are ready to get back to the top tier in the MAC than the grand stage of Michigan Stadium.

Everyone knows just what Michigan means to college football. There is not a program with more wins or a more iconic stadium and not to mention those winged helmets.

Yes it will take all five of these things for Central to have a chance in this game but to win it is going to take a lot more than just playing to your strengths. It won’t be easy but crazier things have happened.