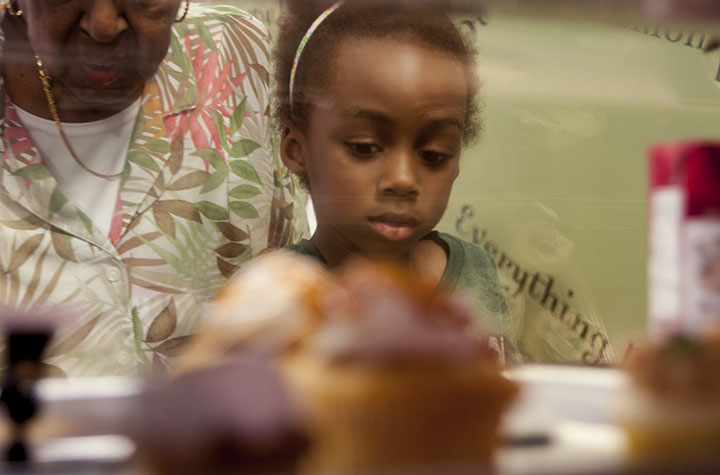 As the door to Crème de la Crème Cupcakes swings open, you hear the ring of a bell to let employees know a customer has arrived.

Junior Aubry Russell walks inside the shop with her friend and has a smile painted across her face. She looks at the selection of cupcakes offered before making a decision.

“I just got the cookie dough one because there’s a piece of cookie dough in the middle and it sounded really good,” Russell said. “I just needed a chocolate fix today.”

Russell is just one of the several people to walk in and out of Crème de la Crème Cupcakes for a tasty treat.

The cupcake shop, across from the Broadway Theatre in downtown Mount Pleasant, opened on July 31.

Walking into the shop, you can’t help but notice the purple walls with black flower decorations and the purple and gray checkered-print floor. Flavors of different cupcakes are also written across the wall and there’s a small sign that reads, “Keep Calm and Have a Cupcake.”

Crème de la Crème did not always have the intention of being a shop that only sells pastries. Instead, it was originally going to be a flower shop.

Store owner Kristy Cable explained when starting the business she had the idea of selling flowers with cupcakes where she would craft the cupcake’s frosting into the style of a flower. She would make beautiful bouquets out of the cupcakes to help complement the flowers, which could be brought from the store or delivered to people’s homes.

When she opened the shop with the title “Sweet Arrangements and Baked Cakes” on her window, she expected people would come through the door to order flowers. However, the customers entering the shop demanded one thing — cupcakes.

Cable said it took her six months to realize people really didn’t care about the flowers, but the sweet treat they sold alongside them.

“They wanted just great cupcakes,” Cable said. “So then it took off. Then our flavors changed and now we’ve kind of changed the mood of everything. We do delivery still, but flowerless deliveries.”

After changing up the shop’s original thought when beginning the business, Cable decided to name the store Crème de la Crème Cupcakes. She said she actually got the idea of the name from her mother because she would recall her mother saying “cream of the crop.”

Cable decided the name Crème de la Crème fit perfectly with the store because the French phrase means “Best of the Best” and according to Cable, this cupcake shop is the best in Mount Pleasant.

With a variety of more than 20 flavors from the common and familiar to the crazy and imaginative, Crème de la Crème Cupcakes has something for everyone.

Crème de la Crème Cupcakes offers different groups of cupcakes to match the different tastes of its customers. For those who are fans of cheesecake, there is the cheesecake line. The line is a combination of cake and cheesecake.

One of the cupcakes under the line is the red velvet cupcake, which is dazzled with red sprinkles over cream-colored icing laying on a piece of rich velvet moist cake. There is also the raspberry cheesecake cupcake with fluffy icing and a piece of raspberry sitting atop of the cake.

There is also the Monkey Line, which Cable calls one of her favorites. Every single cupcake in this line has banana-flavored batter. From Happy Monkey to Chunky Monkey and Funky Monkey, Cable said these silly names are popular among customers.

Employees come up with names and ideas for different flavor cupcakes based on pure hunger Cable said. She said if five of them are in the kitchen starving, they’ll throw anything together and it could lead to a recipe for a new cupcake.

Cable’s daughter, Felisha Cable, works for her mother’s business and said that she never pictured her mother having a cupcake shop. She also said she loves every single cupcake in the shop. Her favorite is the pumpkin cheeseake, while her mother enjoys them all, especially flavors like Peanut Butter Madness and Coconut Dream.

“My very favorite is Coconut Dream, but that’s not the customers’ favorite,” Cable said. “The customers like the cookie dough because it tastes like it’s a raw cookie dough batter on the top. But the Coconut Dream— I love that cake. I can eat one of those every morning and every night and never get tired of it. I love it.”

Cable said the reason she thinks her business is so successful is because Mount Pleasant doesn’t really have a true cupcake shop and one of the shops that sold cupcakes recently closed.

Cable said her staff works very hard to make amazing cupcakes. She calls one of the decorators for her shop “phenomenal” and that she imagines she’ll be the next Cake Boss. Cable also said Crème de la Crème Cupcakes is simply a specialty shop for cupcakes.

“If you call, you can’t order a pie,” Cable said. “You can’t order anything other than cupcakes because we just want to focus on what we have and make it really, really good. And I think it’s nice to have specialty shops. When you go downtown, you should have specialty things, you know you’re going to get the best of what you’re looking for instead of trying to do 50 other things.”

Even though the shop does wedding cake and bakes cakes for other events, its main focus is on cupcakes. Five years down the road, Cable hopes to have more locations.

Reflecting back on her shop, Cable said she loves the changes she’s seeing with Crème de la Crème Cupcakes. She said she gets a thrill every time she looks at her window and sees the Sweet Arrangements and Baked Goods title because it blossomed into something bigger than she would’ve ever imagined.