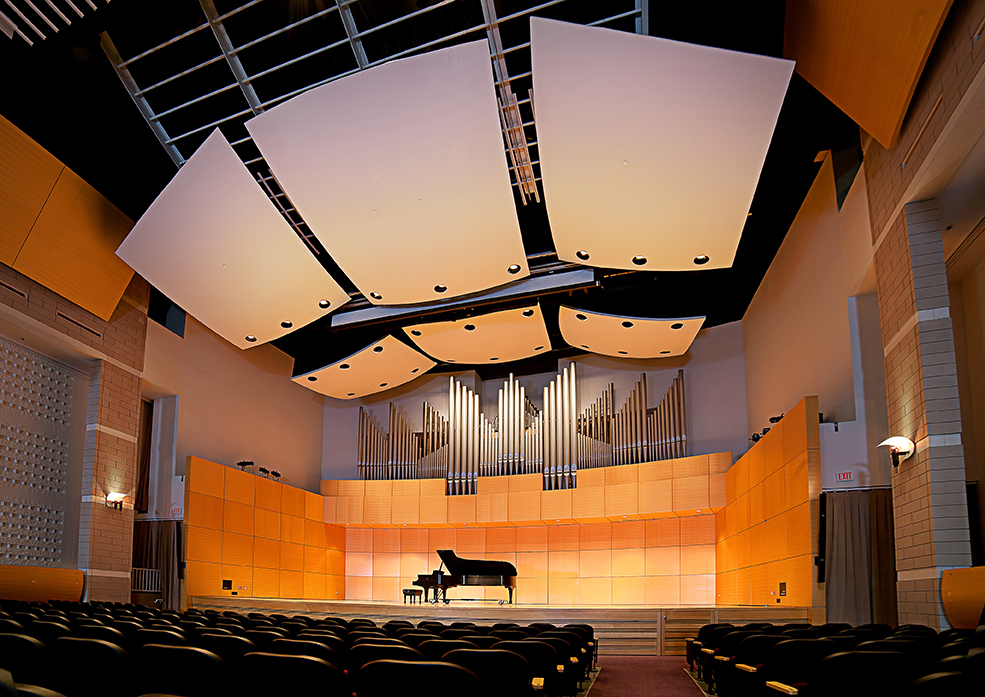 She sits cross-legged on a bench outside of Staples Family Music Hall, pausing to contemplate her words. In the silence, another student’s vocal ranges begin in an effervescent quirk of the music building.

Her words, if spoken by anyone else, would sound arrogant, but from Bjerke, they are said with lilting confidence, a kind of subtle self-assurance that makes one believe them to be true.

In fall of 2013, Bjerke, a Mount Pleasant native, had no intentions of being a music major. In fact, she wasn’t sure exactly what she wanted to major in, only briefly considering public relations. So, when her choir took a visit to Central Michigan University to attend the school of music’s Vocal and Choral Day, she wasn’t scoping out the program. She just happened to be in the right place at the right time.

It was on that day that CMU Vocal Director Dr. LaToya Lain told Bjerke that she had a gift, and on that day, Bjerke decided to pursue music.

Now a sophomore pursuing a bachelor of music as a vocal performance major, Bjerke lives an incredibly busy life, arriving at the music building in the early morning hours and leaving at dusk. She jokes that she and the janitor take shifts – she, from 7 a.m. to 11 p.m., and he, the hours in between.

As if the amount of hours she spends in the building doesn’t speak words of her dedication, it turns out that pursuing a music major isn’t as easy as outsiders would like to believe. Last semester, Bjerke took a course load of 23 credits, ranging from music theory, how music works, sight singing and ear training, piano, introduction to music technology and music history.

On top of it all, Bjerke must sing in other languages for most performances – German, Italian and French, just to name a few.

In learning a piece, she must learn the translation in order to best convey it to her audience, practice the diction, the expression and finally, the notes. She must also deal with performance anxiety, music juries and much more. In her own words, being a music major is “more than just fluff.”

In all of the challenges that her vocal performance major brings, it only drives Bjerke forward.

“I love it because it is the only thing in my life that has presented this much challenge,” Bjerke said.

In her very limited free time, Bjerke is a new member of the women’s music fraternity Sigma Alpha Iota where she feels she has found her niche, but it was hard finding the right out-of-school home for her. She tried many organizations before friends suggested she join the music fraternity.

“I had someone tell me before ‘well, you’re just so music,'” she said. “Well, yes, I’m very music! This is what I do with my life, it’s not just my hobby, so it’s really exciting to [be in a place] where everyone around you is just as passionate about music as you are.”

It’s not all fun and (singing) games

For most college freshmen (and actually, for all of us students), the hardest part of schooling is figuring out what they want to do with their lives. But, for Bjerke, that was far from her mind.

For much of her freshman year, she struggled with kidney problems that kept her out of school and out of practice. She couldn’t sing – at least not without a great deal of pain.

“You never know how lucky you are until you’re tested,” Bjerke said.

Bjerke went on multiple doctor visits, but nothing seemed to help. Worrying that singing would always cause her pain, she wondered if she should just let it go, but continued to do performances and become a better vocalist anyway.

Toward the end of the year, the kidney problems were resolved. However, the long-lasting issue had set her back in classes and vocal lessons.

Even with the worst thrown at her, Bjerke’s voice remains light and she beams as she talks about vocal performances.

“Being a music major is more than just singing and playing an instrument,” she said. “Studying music is what it means to perfect an art.”

She sees improvement in her vocal ability from year to year, and it pushes her forward.

When asked about her future, and if it involves music, she remains humble.

“At the end of the day, you have to trust that you can do it, and that you have the talent and the ability to do it.”

While most non-musical majors are preparing to finish their degrees and go out into the “real world,” Bjkere has a different plan. With her vocal director’s help, she plans to attend grad school, then a young artist’s program, then get her doctorate.

“I’ve always believed you should shoot for the moon, but right now, it’s so early in my career that I don’t know where the moon is. ‘What you’re going to do in the opera world’ was never dinner conversation. As long as I’m pursuing music, I’m sure I’ll be happy.”