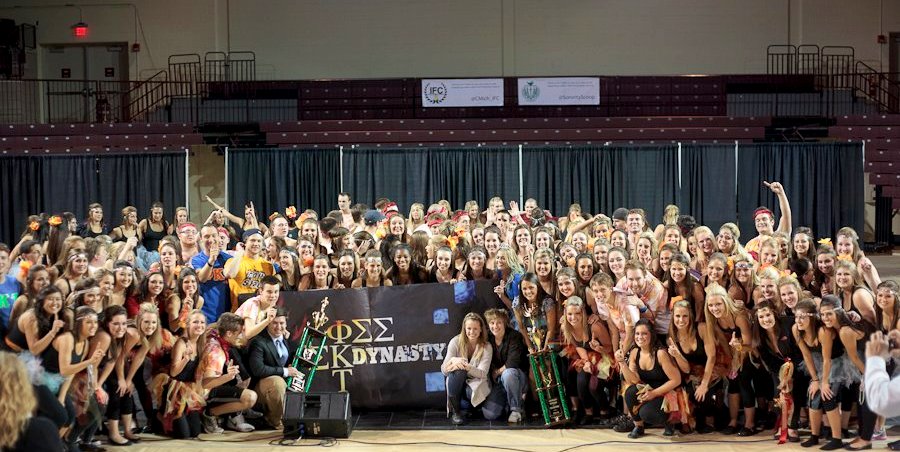 Central Michigan University’s social Greek community spent the week of April 15- 20 not only competing with one another in academic and athletic games, but raising money for a great cause. The annual “Greek Week” raised more than $11,000 for Logan MacGregor, a Mount Pleasant 13-year-old battling leukemia.

“Every fundraiser we’ve had, within the first 2 sentences spoken we’ve made sure to mention how hard the CMU Greek community has been working for us,” Brooke Helm said, MacGregor’s aunt and campus adviser to the Alpha Sigma Alpha sorority on campus.

The weeklong event is a series of games and competitions with a Mock Rock performance on Friday night. Events were held every day of the week Sunday through Friday, usually excluding Wednesday as a rest day. This year, Greek Week chalking had to be moved to Wednesday from Sunday because of weather conditions.

Along with a series of points awarded to groups throughout the week for attendance and winning competitions, the Greeks were busy raising money through “Penny Wars,” an event that makes a huge impact every year. With this year’s penny competition being worth the same amount in Greek Week points as winning the Mock Rock competition (which in previous years held the highest point value), winning Penny Wars was a huge priority for groups.

“It felt really good that we raised the most money for a great cause rather than winning the other stuff that really didn’t affect Logan’s life,” Katie Eldridge, sister of Alpha Chi Omega, said. Eldridge found out Friday evening they won the Penny Wars competition with their partners, the brothers of Sigma Alpha Epsilon. “It was also very emotional at the same time.”

This year’s Greek week theme was “Words.”  The Greek Week representatives compiled a list of words selected by the Greek week chairs, and chosen by each group in a random order from a hat. The word dictated which songs the teams could include in their Mock Rock choreography because the songs had to include the word in the song title or artist name. The words included love, rock, girl, fire, dance, jump and work.

According to the CAMPUSPEAK website, “It’s as simple as our members committing themselves to leadership guided by the principles of good friendship—giving young men and women a safe, nurturing place to become their very best.”

Alicia Kellogg, sister of Delta Zeta and Panhellenic VP of Risk Management got a chance to hear Hart speak during Greek Week and this previous February at an Association of Fraternal Leadership & Values conference.

“I think she was a good speaker because not only did she have personal experience in what she was talking about, she helped make it so clear about the problems we have in Greek life and how to fix them,” Kellogg said.

Tuesday brought the academic games, where the real competition for the week began. An exciting atmosphere assisted by emcee Brock Thatcher, CMU’s IFC president and brother of Phi Kappa Tau fraternity, made the games enjoyable to sit through for their 45-minute duration. In a “Family Feud” game, six members of each group pairing represented their teams onstage in Plachta auditorium.

Questions included “no-brainers” like “Name an Ice Cream flavor” and “Name a Disney movie.” Some audience members felt the first round was a lot harder than the second, particularly after the question that asked for a “department at Home Depot.”

After the first two rounds, the “Fast Money” round took place between the top scoring pairs of Phi Mu/Sigma Tau Gamma and Alpha Sigma Alpha/Alpha Sigma Phi. Outscoring the other 190 to 160, ASA/ASP took home the crown (and the points!).

The groups were given most of the day off during their busy schedules to catch up on studying, but from 5-7 p.m., the groups were able to chalk their groups Greek Week advertisements around campus.

Jon Reusch, brother of Sigma Alpha Epsilon, hosted an All Greek Blood drive, which was recognized as an unofficial Greek Week event. The American Red Cross, which also benefitted from donated soup cans and goods the groups were required to bring to the academic games, raised enough blood to save more than 250 lives — resulting in the biggest CMU blood drive ever.

Thursday is always one of the most important days throughout the week. It is one of the last chances to earn points before Mock Rock and more importantly, the last day to donate money for Penny Wars. Given a deadline of 5:30 p.m. to put any dollar amount in to any group’s Penny bucket, thousands of dollars pour into the building with 20 minutes left. Many groups try and hide the amount of pennies they’ve actually collected until the last minute so no other groups can put silver coins to contribute negative points to specific teams.

Not only is Thursday the last day for Penny Wars, this is the day for the Athletic games for the teams. This year’s games, though not technically “athletic,” were based on the popular TV show,“Minute to Win It.” These games included transporting cotton balls via one’s Vaseline-covered nose from one end of a table to the next, being the first to remove all tissues from a box and a relay of different events amongst the top three teams with the best times combined.

“Friday is always the best,” Katie Migliore, sister of Delta Zeta and Greek week representative said. “Seeing everyone’s final product on stage is my favorite. We all work really hard and stay up late preparing for Mock Rock. It’s rewarding to see the outcomes.”

Greek week representatives Sabrina Masciulli, Kaitlin Bucchare and Matt Varner presented the family of Logan MacGregor with a check of all the Greek Week proceeds and the family in turn presented the Greek Community with a banner to show their appreciation. Logan was unable to attend the event, but he taped a video for the audience thanking them for all that the community has done for him.

“I’m honestly so happy that we could raise so much money for Logan,” Masciulli said. “Being able to see his family accept [the check] with so much happiness made the crazy week worth all of the hard work. It makes me feel so lucky to be a part of a community that could do that for someone.”

Masciulli and her co-chairs were elected in the fall 2011 semester to start preparations for Greek week early on.

“It’s nice to have time to myself again, but the work definitely paid off and I am sad that it’s over because I got so close with the other 2 co-chairs.”

The Mock Rock show began at approximately 6:15 p.m. and lasted about 2 hours. Each group had a maximum 10-minute performance to show the audience and judges the dance they have been preparing all week long. After a few technical difficulties and two groups having to restart their performances, Gamma Phi Delta Christian Fraternity showed the crowd their traditions with a step performance while judges tallied the Mock Rock scores.

After a week of tough competition, taking home not only the honor of Top Mock Rock but also the title of Greek Week champions was the “Dynasty” of Sigma Kappa, Phi Sigma Sigma and Phi Kappa Tau.

“I was so excited! I think everyone was just so overwhelmed with excitement,” Alex Puzzolo, sister of Phi Sigma Sigma said after being asked how she felt after the announcement of her team winning.

Even though the entire week was a competition, it was never forgotten that the true goal of the week was raising money for MacGregor. On more than one occasion in McGuirk arena the Greeks chanted “Logan! Logan!” in addition to their own teams names. The Greek community was able to finish the week off knowing that they not only raised an amazing amount of money but also changed the life of a young boy — a priceless accomplishment.