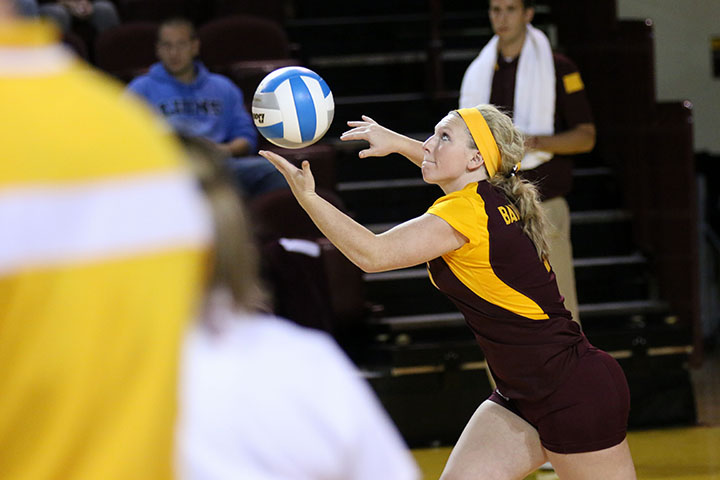 From a playing standpoint, the Clarkson native supports her teammates on the court. Outside of volleyball, Barker has her own distinct form of support.

Growing up, Barker lived with her mother, father and two younger brothers, who all have played a significant part in helping her along her journey as both a student-athlete and as a person.

Barker calls her dad her “biggest fan,” and he was her club coach in high school. When she redshirted her junior year, he was the one in the stands cheering her on at all her games, no matter the distance.

Barker said her father would drive to games that were seven hours away. It is moments like these that means the most to her.

Barker’s teammates consider her as bubbly, caring, motherly, someone who is there to listen and someone who sees the best in people. Some of these assets are definitely evident when this 5’4” volleyball player is on and off the court.

Volleyball is a huge part of Barker’s life. With not being the tallest player on the court, her teammates help her overcome adversity.

“I believed in myself when I first came here, but I don’t think nobody believed in me more than my teammates and my coaches to help me get to where I am,” Barker said.

When it comes to improving her game, Barker said it’s all about focusing on who you want to become as a person and a player. With this season, Barker is ready to unleash her talent and continue to thrive off of support and love from her family and team.