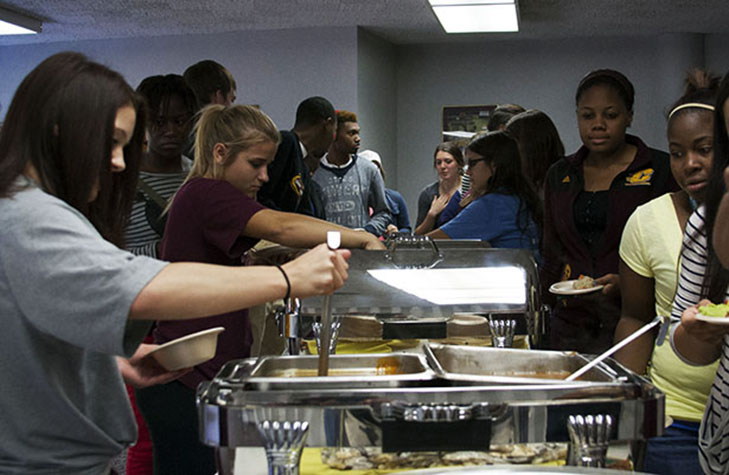 Last week the Multicultural Academic Student Services sponsored a Food Taster event for students to celebrate Hispanic Heritage Month, which is celebrated from Sept. 15 to Oct. 15.

Assistant Director of Multicultural Academic Student Services D’Wayne Jenkins said the purpose of the event went beyond filling students’ stomachs but giving them an idea of the different types of foods the Hispanic culture has.

The food taster event offered several dishes to students. The three main entrees were the Uruguayan rice, Cuban sandwiches and Feijoada, which is a stew mixed of beef, sausage, and black beans.

Sophomore Riley Downey attended the event mainly because she enjoys eating cultural foods. Downey said she likes events like these because she’s able to try the real ethnic instead of the Americanized version that a lot of fast food restaurants sell.

At the event, Downey said she had a little bit of everything and the taste of the food overall wasn’t really spicy but flavorful. Downey also realized you couldn’t judge a book by its cover when it came to the food.

“The rice was really good, which I wasn’t expecting,” Downey said. “The texture didn’t look good, but it tasted good.”

Downey was also a fan of the apple taquitos. She said it was definitely one of the foods of the night that stood out to her.

Junior Timothy Samuel attended the event because he was a Multicultural Advancement and Lloyd Cofer (MAC) scholar.

“It was a apple dessert wrapped in a tortilla kind of,” Samuel said. “I enjoy apples. I’m really big on apple pies so it was a really interesting dessert to have here.”

Samuel said he came to the event because it was one of the multicultural events throughout the year that were listed for scholars to attend. This event not only gave him the chance to try different foods he wouldn’t normally try, but find out more about the Hispanic heritage through some of their foods.

With this event, Samuel said he is able to gain more knowledge about the foods people of different races eat and experience what it’s like to be in their shoes for the moment.

“It is really important that we understand the groups that are being underrepresented,” Samuel said. “So coming out to support their event actually shows not only that we’re here, but we actually do care and that they matter to us.”

Freshman Alisha Clements also attended the event after seeing a flyer advertising it posted on the wall in the hallway by their multicultural advisor.  Clements said there was a lot of good food offered to students.

“A lot of the foods that were there besides the taco, you wouldn’t conventionally say they were Hispanic food,” Clements said. “But they are so it was interesting to see what really is and what really isn’t to not have stereotypes.”