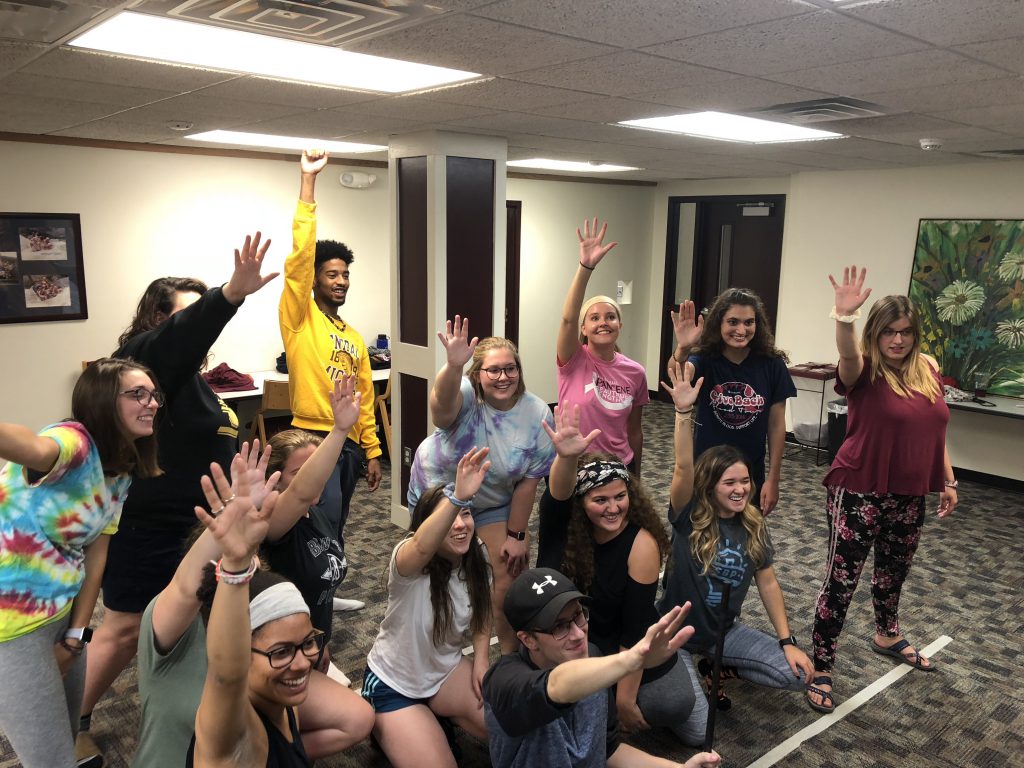 Story and photos by Brittany Andrade

Rock Rally has been a staple event during Homecoming for over a decade at Central Michigan University.

Every year, different student groups competing for the Maroon Cup have a little over a week to put together a dance skit that matches the Homecoming theme. At the end of the homecoming week, these groups perform their skit— encouraging their peers, faculty and staff to fire up for homecoming.

For Alpena junior Connor Thatcher, Rock Rally has been a way of interacting with CMU in a new and exciting way.

“It’s a good opportunity for people who wouldn’t normally step out of their comfort zone to test the waters,” Thatcher said. “This way they can see that ‘Oh, this is what Central is. It’s wacky, fun, ridiculous and everything I kind of wanted to do but was a little afraid to start with.’”

Thatcher has been a part of every Rock Rally since he’s been at CMU. As an RA in the Robinson and Barnes community, he knows how the event can impact a student’s life.

“Being able to get people together that wouldn’t normally meet is so much fun,” Thatcher said. “At the beginning of the week we’re just a bunch of people that were separated by floors and buildings since R&B’s building are separate, but a part of the same community. Now we’re a well-oiled machine. There’s a camaraderie here that wasn’t there at the start of the week.”

This year’s theme is Route 1892, a subtle reference to the year CMU was established.

Each group performing in Rock Rally was given a state they’ll be “traveling from” on the route in order to get to CMU.

“What’s different for me during this year’s Rock Rally is I’m actually choreographing Larzelere Hall’s performance, not just participating,” Patten said. “I love the Rock Rally. It’s energetic; you’re working with other people and it’s a lot of fun.”

Patten has already noticed a shift in many of the Larzelere Rock Rally participants after a few days of rehearsal.

“Everyone was really quiet to start, but the more that we’ve gotten into the performance the more comfortable they’ve all gotten,” Patten said. “This has definitely been a confidence-builder for a lot of people, myself included. The more our participants see how cool they look when they’re not actually dancers and really get into it, the more Larzy Love we’ll be ready to share when it’s time to perform.”

“Rock Rally has really brought me into the homecoming spirit,” Clemens said. “This has been my way of getting involved, bringing myself closer to my residence hall, and now friends that truth be told I didn’t even know lived in Larzy. Now I’m glad to know them.”

“The fact that we get to tell a story using music, which is already so powerful, is so much fun,” Clemens said. “It’s really been such a positive experience.”

Student Activities and Involvement Director Damon Brown said the students are what Rock Rally is all about.

“Rock Rally is probably the highlight of the week for many students,” Brown said. “The participants put a lot of work into their Rock Rally performances, and it’s really interesting and impressive to see what they come up with in such a short amount of time. The energy in Plachta Auditorium is through the roof. It’s a great way to finish the week and to see the students celebrate homecoming.”