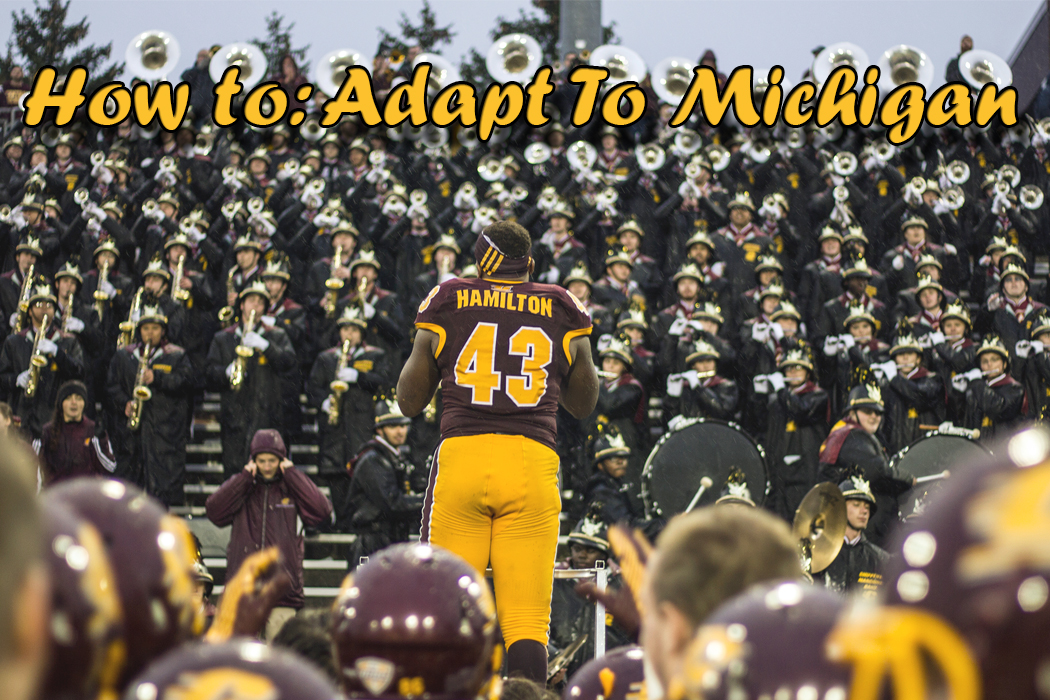 “Why did you choose Michigan?”

Every out-of-state student has been questioned this more times than they can count but in an ironic, indigenous way we like it.

Moving to a city a couple thousand miles away from your previous home can be a slight culture shock, but at the end of the day it’s worth it. Although, some culture changes are different than others, the out-of-state students eventually adapt.

The weather in Michigan can be hard to adapt to for out-of-state students, but like Lauren Hightower, a sophomore at Central Michigan University from Chicago, we find a way to adapt.

Hightower deals with the inconsistent weather forecast by adapting her wardrobe. “It’s definitely more inconsistent than at home. I’ll wake up to sunshine and dress for a warm day but change my outfit by the afternoon since the weather decided to be bi-polar,” Hightower said.

Not forgetting those who are from the south, a thick jacket would be the first thing you buy before coming to Michigan. For freshman Gina Lamka who’s a native from Dallas, Texas, buying snowshoes was a reality check.

“I didn’t buy snow shoes until February, 2015, and I never had to deal with negative degree weather. It was hard to adapt especially when my friends and family would send pictures of themselves at the pool.”

Some out-of-state students sit on the fence in this battle, but the obvious winner is coke (at least for me). Contradictory to my up bringing, many students from the Midwest would say soda.

“Heck no to pop, its soda. It’s been soda since it’s been soda.” Luna Mishoe from Long Island, NY said.

While students that are native to Michigan may think this pop, coke or soda war is but a miniscule adaption, it does leave out-of-state students in a bit of a bind.

“I did start saying pop since I’ve been here at Central, but when I’m at home I say soda,” freshman Diyana Dimitrova from Dimitrovgrad, Bulgaria said.

One thing many out-of-state students agreed on was the passion Michiganders had for their main sports teams.

“Everyone is passionate about some type of team here. I mean, there are the Red Wings (fans) and also there are the Pistons (fans),” Mishoe said.

It all depends on where you live that define your taste in teams, such as the different tastes of the Upper Peninsula.

“I appreciate that the Upper Peninsula shares a common interest with us Northern Illinois people, which is the Green Bay Packers, “ sophomore Hannah McGoldrick said.

While the passion runs deep amongst in-state students for fellow Michigan sports teams, this is just something the out-of-state students have to adapt to.

Despite the differences some out-of-state students face when it comes to attending Central Michigan University the experience has its perks.