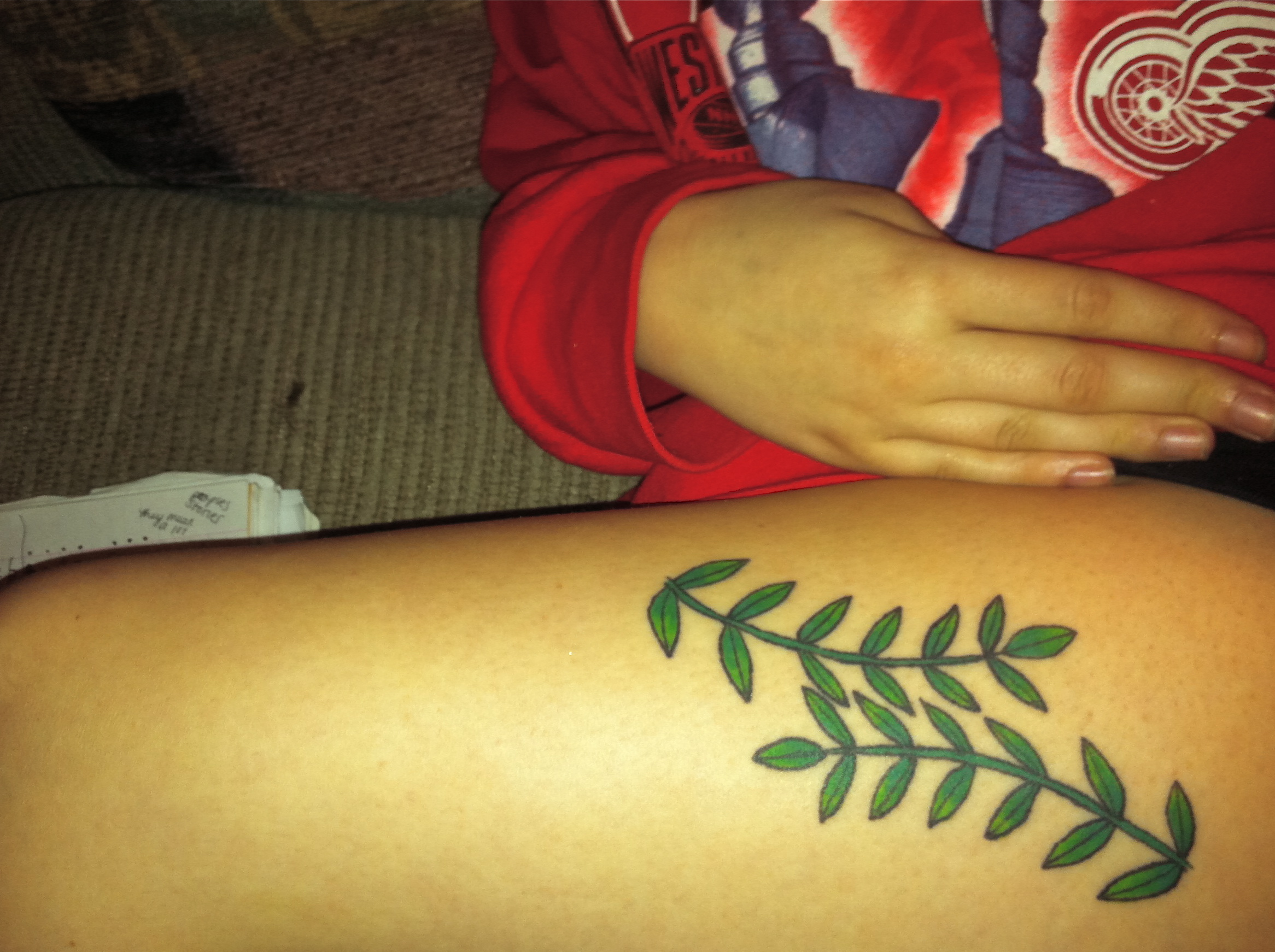 People each with their own ideas of individualism, all connected through the same outlet of expression. Through the art of tattooing, this group of roommates from East Lansing conveys their own personal messages and beliefs to the public.

On his left calf in black ink, Matt Betka, 20, has a tattoo of the Human Rights Campaign sign overlapping a peace sign. It was on his 18 birthday when he got the design on his leg. Betka’s kind personality came through his words as he told his story.

“That was the year that I came out, so to have the Human Rights Campaign sign tattooed on me was really important. I wanted to merge peacefulness with human rights,” Betka said.

He made the design with the paint application himself, and had it drawn on by his friend. Betka feels the same connection with his tattoo as the others do; he feels that in every aspect it became a part of him and who he truly is.

“When I see it, it helps me come back to myself if I ever feel distant.”

“Clearly family is the most important thing,” said Covert, 21, as she sat in the cluttered living room of her house on Lilac Street.

She sweeps her long black hair to one side, revealing a circle printed on the back of her neck that she has had for two years. Each name written in black cursive represents a member of the Covert family. It reads, “Whitney, Will (brother), Marc (father), Gail (mother), Eric (brother), Katie (sister).” Although she is the only family member with the emblem, she continues to see great importance in it. Covert smiled as she described her family as being extremely close. Her brother Will also lives in East Lansing, which allows them to frequently visit one another. Covert was 19 years old when she had the tattoo completed and desires to have more tattoos once she decides what she would like to have done.

Sitting on the floor of the Lilac house, Chelsea Gordon, a 21-year-old student at Michigan State University eats her noodles as she uncovers her tattoo that rests between her shoulder blades. The words circle a flower and say, “Impress yourself” in black ink. Originally from the UP, Gordon met the other students of the house in her first year at MSU in the dorms and has been friends with them ever since. She was 20 when she had the tattoo done and the belief behind it is still with her today.

“I think that everyone does things for recognition, to get rewards and impress other when they should actually just do things for themselves.”

When asked what the biggest occasion was when she lived by her belief, she expressed that there has never been just one occasion. Gordon believes her tattoo does not apply to one thing; it is just an everyday moral she lives by.

Out of her five tattoos, Stephanie Allain chose to show two of her favorites. Allain is 21 years old and also attends MSU. When she was 19 years old, she got her third and favorite tattoo on her right rib cage. She drew the design and used the lyrics of Bob Marley, “Don’t worry be happy,” because it is one of the expressions she appreciates most. Allain’s multi-colored hair and long floral skirts help show off her carefree personality that accompany her tattooed body. On her left wrist in black ink, the word “home” is drawn in cursive. It is her fourth tattoo that she had done when she was 20 years old.

“I feel like wherever you are you can make that your home, it’s always wherever you make it,” said Allain as her bracelets clinked together.

She believes that college in general forces you to feel out of place and miss your home, and that people should attempt to find their new homes wherever it is they must go. Although it is not hidden by clothing, Allain said that it never holds her back from job opportunities.

On Allain’s 21 birthday, her and Monica Hedrick marked their friendship with matching tattoos of plants from an original Alice in Wonderland drawing. Hedrick, 21, attends MSU and lives downstairs in the Lilac house. The green and black tattoo stretches across the side of her left thigh and can be easily hidden by shorts. “It was something I drew as a child and one day I just decided I wanted to have it as a tattoo,” stated Hedrick.

Allain had earlier said that the two of them are spontaneous people and the idea behind the tattoo was less for her birthday and more for the friendship, which had begun three years prior while attending MSU. Hedrick has five tattoos in all and regrets none of them. She wishes to build onto the thigh design and is anticipating getting more tattoos.