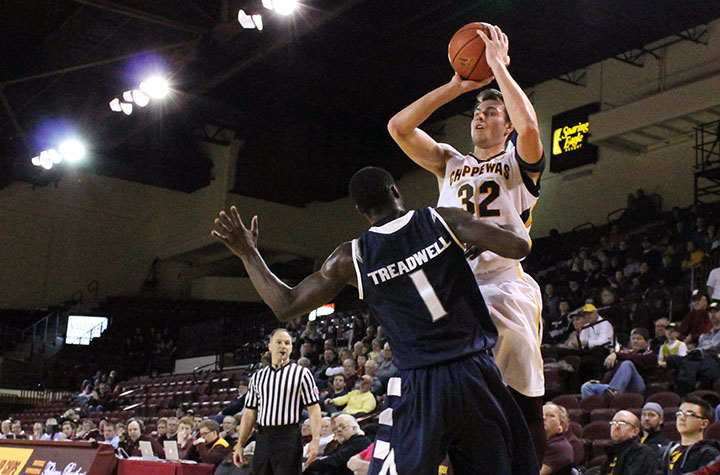 Sophomore forward Blake Hibbitts led Central with a career-high 21 points shooting seven of 11 from the field and three of five from the 3-point line.

“I’m always confident in my shot,” Hibbitts said. “It’s just when you make one the next one’s easier. So I was lucky enough to make the first one and the rest of them kind of were a little easier after making the first one.”

Central was rolling from the start of the game with the help of Hibbitts, who made a few threes and a 3-point play in the beginning of the game until Akron took the lead. The Zips closed the first half with a score of 41-36 by shooting 53.3 percent compared to the Chippewas’ 52.0 percent.

Hibbitts said the loss was due to the team not being physical enough to block out and pursue the ball. Hibbitts said it’s something the team will aim to improve on as well as rebounding in practice. He said he noticed a similar theme in the last few games Central played in, and the team makes its presence in the first and second half but dig themselves in a hole when giving up a 10-0 run to Akron.

“It always seem like we’re trying to come back at the end and we need to not give up those runs and get ahead every once in a while and we’ll get some wins,” Hibbitts said.

Hibbitts led Central with six rebounds and was four of five from the free throw line. Hibbitts was proud to have had a career high in points, but said he would’ve felt a lot better if the team got the win.

Coach Keno Davis wasn’t surprised by Hibbitts’ performance in Saturday’s night game. Davis said Hibbitts struggled with his shooting at the beginning of the season, but picked his numbers up due to the hard work he puts forth in his shooting.

“Blake Hibbitts is one of the best shooters in the conference and when you look at the percentage that he’s shooting for the year, it’s remarkable,” Davis said. “Especially, considering that he’s started so slow.”

Davis said the team has been struggling with their interior defense, but the offense has been the opposite. Davis said the three-point shooting is starting to pick up due to the players’ hard work and taking better shots. He said there’s plenty of room for improvement because of how young the players on Central’s roster are, and the team just has to learn how to win and that’s something that doesn’t come easy.

“First, you have to learn how to compete,” Davis said. “We’re at that level. Now you got to learn with five, six minutes left when you have to buckle down and you can’t have mistakes defensively.  You can’t have missed opportunities offensively, especially with our margin of error.”

Davis already sees improvement in Hibbitts and said he thinks Hibbitts is becoming more of a versatile player by the way he’s able to get to the free throw more frequently and assist the team in rebounding.

“I think it’s going to be exciting to see how he’s going to progress not just as a shooter and become one of the better shooters if not the best shooter in the league, but also to become more of a versatile player,” Davis said.

Central Michigan will play against Ohio on Wednesday, Jan. 29 in Athens, Ohio.