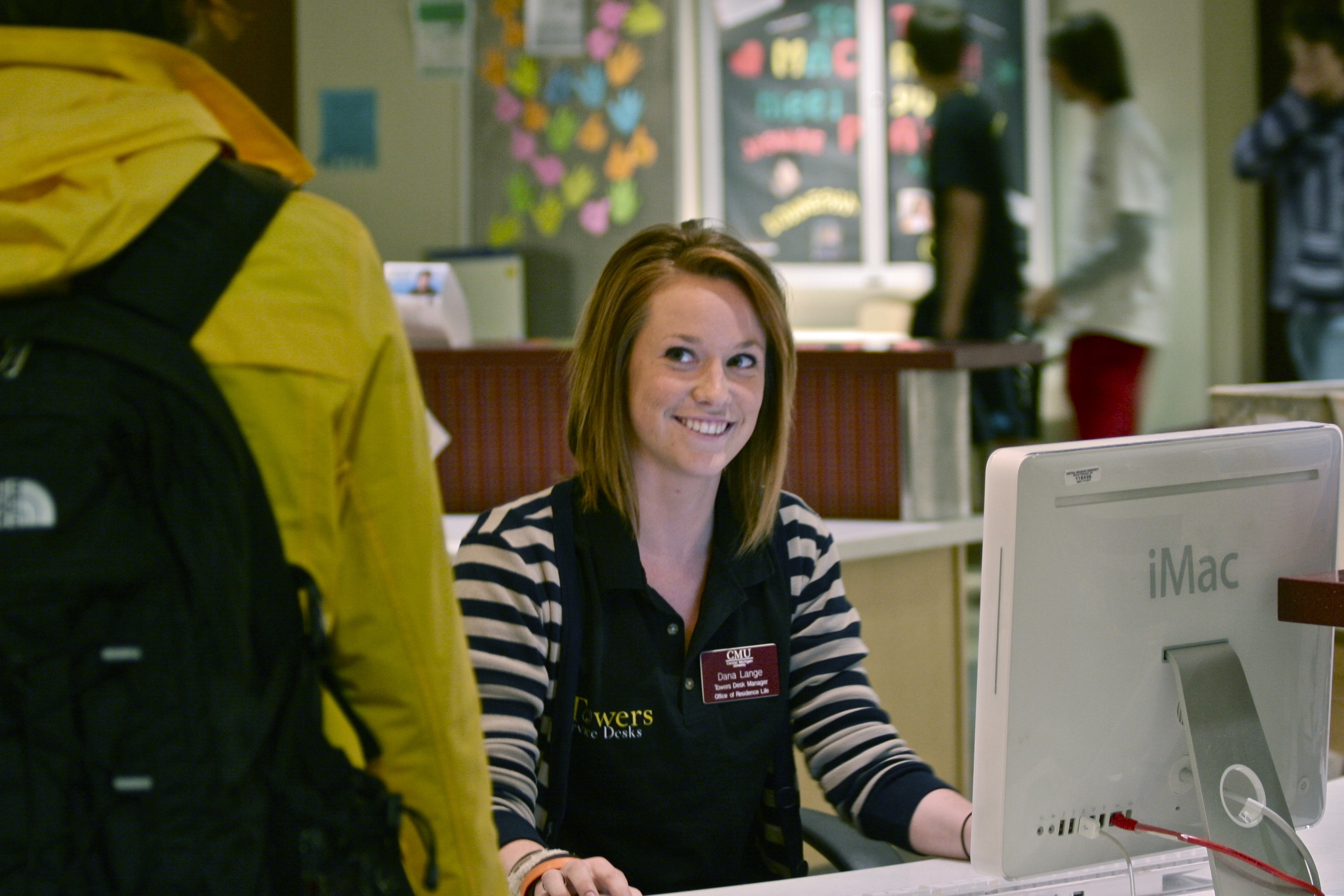 “Hi, what hall?” she says with a lively voice as residents and guests walk through two sets of double doors and toward the desk.  If they didn’t know any better they would have thought it was a trap.

Dana Lange is a Towers Desk Manager, but most know her as a “deskie.” It is midnight at the Kulhavi check-in desk and she will be there for the next three hours.

The check-in desk is impossible to miss. It is a mountain in the middle of a prairie. Spotlights of fluorescent lights shine on it, enough to give a headache to untrained eyes. Inside jokes fly back and forth between deskie partners, receiving confused glares from uninformed listeners. Music starts and stops; sounds soften and change quicker than the artists would probably prefer.

The music, while not important to complete the job, is given top priority until a decision on what to listen to is made.

“Most popular tracks or a specific genre?”

Whatever the final decision may be, it does not protect the deskie from the sudden switch from play to business in a matter of seconds.

“Get prepared,” Dana says to Nick Hudolin, her partner for the night, “Do you know these kids?”

Being a deskie means that you notice everything. From the specific scents of various alcohols and outfit combinations to what events happen on the other side of the double doors and which familiar faces are delivering food that night.

Sometimes the deskie doesn’t need to guess. Sometimes stories from the night are told whether there is an audience or not.

“I just walked to here from Deerfield,” an unprovoked Towers resident explains. “I’m barefoot because I gave my shoes to some girl.”

As the night goes on and the residents begin to come back more and more intoxicated than their predecessors, things begin to get more serious. Debates between universities break out.  CMU vs. Wayne State was the main debate of the night.

It is the job of a deskie to keep the Towers’ residents safe. Often, residents or guests will lose identification, which makes them ineligible to check in to the building.

“We just want to keep you safe,” Dana said explaining the unfortunate circumstance to an alleged resident. “We cannot let anyone in, you are going to have to find someone to bring your identification for you.”

“These are some efficient desk workers,” a resident chimes in during the debate.

“People usually enjoy the process of being checked in,” Dana says in response. “It makes them feel important.”

The deskie is the go-to-person to get directions from if you do not frequent the area, and the designated mediator for issues between friends.

“Wayside sucks,” friends tell her in the middle of a debate. She looks in the opposite direction as she tries to keep in her laughter.

Phone after phone is handed to her with questions like, “Can you please give my friend some directions?”  It is an unofficial, but unavoidable part of her job.

Calm moments at the desk reemerge after the heated discussions. The sporadic search for something to pass the time continues, but is quickly interrupted by friends visiting the desk. Discussion regarding the job is unofficially forbidden.

“You are in friendship timeout,” Hudolin says to Dana as the night drags on and the line between being alert and tired draws thinner and thinner. “Why are you talking like people can’t hear us?”

Hudolin shuts the second computer down just as the floodgates open. It happens every time.

“One of our friends stole this chair from the Cary lounge,” a guest from Michigan State University said struggling to carry the chair through the double doors. “We are really sorry for what he did, we just want to return it.”

The noises of the night slowly but surely soften to a dull roar.  Spotlights are still on full tilt to ensure that nothing slips past the desk. Familiar delivery faces begin to appear at a slower interval as the shift draws to an end, but not before one last minute delivery.

It is 3 a.m. and most of the food services in Mount Pleasant are closing. The constant bugging has paid off; the last delivery for the night is for the deskie staff.

“We love you!” residents shout as the delivery person quickly turns his back as if they were never there at all.

“Have a good night,” Dana smiles and says to the 298th resident that she checked in that night. “Now what are we going to do?”