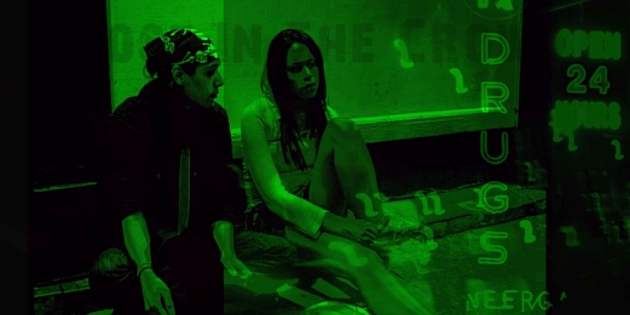 On January 21, in his second inaugural speech, Barack Obama was the first president to speak of expanding rights to gay Americans. The day after this historical event, the Central Michigan chapter of the American Civil Liberties Union showcased the documentary “Lost in the Crowd” in Park Library Auditorium.

“We wanted to show that poverty is a civil rights issue,” McDonnell said.

McDonnell continued to say that the issue of homeless LGBT youth is often seen but ignored.

“This is still an issue,” she said. “Even though we have progressed so much with states who now have gay marriage legalized, there is still a lot of discrimination.”

However, the film shows the youth on the streets and finding it difficult to financially support themselves. In desperation, the teens begin to sell their bodies for food and drugs. According to McDonnell, 42 percent of the New York City youth homeless population identifies as LGBT.

“This film took seven years to make,” McDonnell said. “The film is up close and personal. It pokes holes in our society and said ‘this is here.’”

Andrea LaJoie said she chose to attend the movie screening because it fits in with her major of social work.

“I am taking a child-welfare class, and we talk a lot about homelessness and the LBQT,” LaJoie said. “This is right up my alley and I really enjoyed the movie. These kids could be my future client one day and the more information the better.”

Although the documentary, shows several organizations and volunteers revealing opinions on what needs to be done, the director does not specifically propose solutions to end homelessness. However, Brianna Mehary, who was required to attend the film for a diversity class said that she believed the first step to a solution is awareness.

“Education is a key thing,” Mehary said. “If you educate young, people realize the extent of the problem.”

Mehary said that she did not realize the magnitude of issue or the homeless experience until watching the film.

McDonnell said that the ACLU’s ultimate goal is to raise students’ awareness on the issue.

“I hope the audiences see that this is an important and relevant issue,” McDonnell said. “These are people our age. We live a privileged lifestyle, but we can still work to end this. Let’s make this a tragic part of our history, not a deadly part of our future.”

While the  ACLU chapter on campus is wrapping up Poverty Awareness Month, they are  planning on doing other campaigns this semester, including “Faces of Racism, Faces of Hope” to commemorate Black History Month, and is considering doing a panel on  abortion rights for Women’s History Month is March. McDonnell said that she hoped to see the organization to grow by education, advocation and activation.