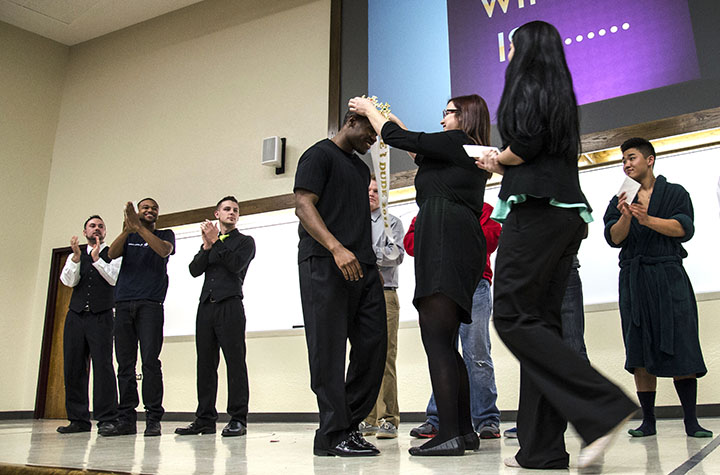 Amanda Revenaugh, senior and vice president of programming for the sorority, was in charge of the event and said a lot of preparation went into planning the pageant.

“Pre-planning started over break and when we got back in January it was non-stop working and making phone calls and booking rooms,” Revenaugh said.

Each of the nine contestants competed in three different events during the pageant. The first event featured men showing off an outfit they felt most confident in, the second event was the talent round, and the third was the question and answer round.

A variety of outfits were chosen in the first round. They ranged from suits, swim trunks, and even a bath robe with business socks.

When it was time for the talent round, contestants showcased their poetry, dance moves, guitar playing and singing. Freshman David Wong spiced up the stage with a dance in a hula skirt.

The crowd favorite for the talent portion was senior Eric Kierszkowski who finger painted the Olympic symbol with the words “Sochi” and “USA.”

“It was nice to have a lot of support out there,” Kierszkowski said.

Pageant contestants were asked an array of questions in the third and final round, ranging from “What characteristic do you like most about yourself?” to “What’s one thing you would change about the world?”

“I was impressed with a lot of the answers that the other contestants gave. They seem like very good people,” Sexual Aggression Peer Advocate member and contestant Joshua Taylor said.

Taylor was crowned the winner, followed by senior Demetrius McCloud in second place, and Wong in third. Taylor said he was suprised when he won the pageant.

“It feels pretty good,” Taylor said. “I wasn’t expecting to win. It was a big surprise for me.”

Taylor is the first non-Greek contestant to win the pageant in the four years it has ran on campus.

Kayla Curran, junior and student assistant to Greek Life, said that she is happy the event was for a good cause.

“I’m happy that all of this money can go to ANAD [Anorexia Nervosa and Associated Disorders] and we can help out,” Curran said.