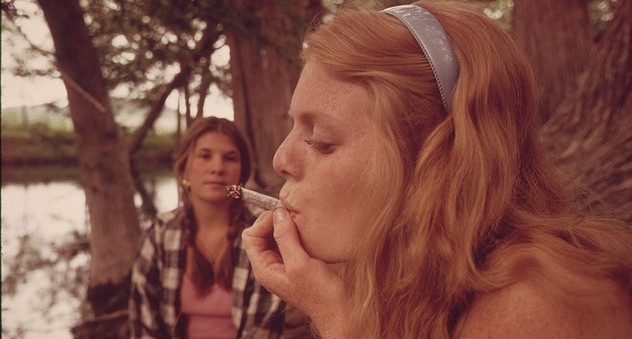 Photo used under Creative Commons  from the U.S. National Archives on Flickr

When Brandon McQueen learned authorities were trying to shut down his business, he wasn’t surprised, just frustrated he’d only been able to operate without hindrance for about a month.

McQueen knew Compassionate Apothecary, a medical marijuana dispensary stationed in downtown Mt. Pleasant, would raise eyebrows, so he tried to keep a low profile and maintain a friendly relationship with law enforcement. And though he hadn’t gone looking for trouble, it soon found him.

“They went around downtown posting flyers…and it just looked really trashy,” said McQueen. “We were doing the best we could to put forth a good image because we knew things might get heated. The last thing we wanted was for people in town to see those flyers and think it was our business.”

McQueen and business partner Matthew Taylor knew the town was abuzz with talk of a dispensary, and they wanted to clear up any rumors. The two decided to set the record straight in an interview with The Morning Sun , which caught authorities’ attention after it was published.

“The police showed up the next day, and we gave them a tour because we were confident we weren’t doing anything wrong,” McQueen said. “A week or two later a cease and desist arrived.”

McQueen and Taylor decided to fight, and for a while it looked as if they might win. The Isabella County Trial Court ruled in McQueen’s favor, allowing the business to remain open, to the surprise of authorities.

But Isabella County Prosecutor Larry Burdick decided to appeal, and this time the courts ruled in his favor. Compassionate Apothecary and dispensaries across the state were forced to shut their doors.

McQueen then appealed to the Michigan Supreme Court, which finally ruled against him in February and set precedent for the entire state.

The primary legal question at play in McQueen’s case was whether the Michigan Medical Marihuana Act provides legal immunity to shops that facilitate the buying and selling of medical marijuana, or dispensaries. Compassionate Apothecary operated as a membership organization, allowing qualifying patients and caregivers to purchase membership and lease a locker in which to store the drug. Members could then buy and sell different strains of marijuana amongst themselves directly or through caregivers. McQueen’s business took a 20 percent cut from each sale.

McQueen’s interest in marijuana began when he was a kid. His father had a long history of recreational marijuana use, and he’d dabbled in the drug as a teen at Mt. Pleasant’s Oasis Alternative High School. But what began as a teenage amusement quickly morphed into a political issue.

“Growing up, a lot of people in my family were marijuana users,” said McQueen. “I saw a lot of people I loved—generally poor people—having their lives extremely negatively affected not by smoking marijuana, but by being prosecuted for it. For me, it was just a fight for poor people.”

McQueen began browsing the website of NORML, an organization focused on decriminalizing marijuana for non-medicinal purposes. When medical marijuana advocates posted on the site that they were looking for people in Michigan to petition for the legislation that would eventually become the Michigan Medical Marihuana Act, McQueen jumped at the opportunity.

He did the same a few years later when he heard the Michigan Medical Marijuana Association was looking for people willing to spearhead dispensaries in their local communities.

“I called them up, told them I didn’t know what I was doing, and they sent someone up to help,” he said. “We were the first dispensary north of Lansing.”

After only a little over a month of operations, McQueen said his business had about 2,000 customers at its Mt. Pleasant location alone, and had spawned offshoots in Lansing and Traverse City.

“We were doing great,” said McQueen. “We started with $4,000, and we were viable by a month and a half in for sure. We were able to pay employees and pay the bills.”

Taylor said he and McQueen wanted to pioneer a new legal model under which dispensaries across the state could operate.

“We saw dispensaries were opening, and we saw that they weren’t following the act,” said Taylor. “We wanted to find a way to do it that would benefit patients, caregivers and the general community.”

Police, however, were not convinced this model truly fell within the confines of the law.

“They interpreted the medical marijuana law in regards to what a caregiver is allowed to do one way, and I and all of law enforcement interpreted it a different way,” said Mt. Pleasant Police Captain Paul Lauria. “They were making a profit and were essentially a distribution center for caregivers to bring in whatever excess product they had.”

Lauria said authorities opted to take civil rather than criminal action against Compassionate Apothecary because they felt McQueen and Taylor were not intentionally attempting to skirt the law.

McQueen and Taylor felt sure the courts would uphold the validity of their business model.

“We were 100 percent confident what we were doing was legal,” said Taylor.

Ultimately, the Michigan Supreme Court disagreed with their analysis, ruling that patient-to-patient transfers of medical marijuana are only legal if they occur for the purpose of alleviating a patient’s pain. Because McQueen and Taylor profited from transfers made by others at their business, the court felt these transfers weren’t aimed at helping patients, but at making a profit.

Oddly enough, despite having to close their business, McQueen and Taylor count the ruling as somewhat of a victory.

When the original ruling was overturned at the court of appeals, judges ruled sales of medical marijuana were not legal. The supreme court threw out that ruling, saying the sales of the plant for medical purposes are protected by the law, just not within a retail environment.

“The court ruled half in my favor,” said McQueen. “They ruled transfers are sales, and that’s an important clarification.”

The Future: Where the Grass is Greener?

Since the ruling, the building that once housed Compassionate Apothecary has sat empty, as have many other dispensaries across the state.

“It’s hard to give advice to people,” Fontana said. “I don’t know how dispensaries are keeping up. Many of them are family businesses, and they’re suffering.”

She said she thinks law enforcement have done a disservice to patients.

“People are on a limited income, and medicine isn’t cheap,” she said. “This just makes things more difficult for patients.”

McQueen and Taylor have both moved on since the ruling.

McQueen said he’s had more time to carry out his duties for the Mt. Pleasant Board of Education, which he was elected to in 2009. He’s also been helping to teach his brothers and sisters taekwondo, and is busy defending his title as state champion in sparring.

He and Taylor both remain licensed caregivers and still see a future for themselves in medical marijuana.

“I’m taking a break until the chaos ends,” said Taylor. “Once that happens, I will probably go back into marijuana services.”

The two are hopeful a new bill making its way through Michigan’s legislature will nullify the supreme court’s ruling and legalize dispensaries once and for all.

But until then, they wait.