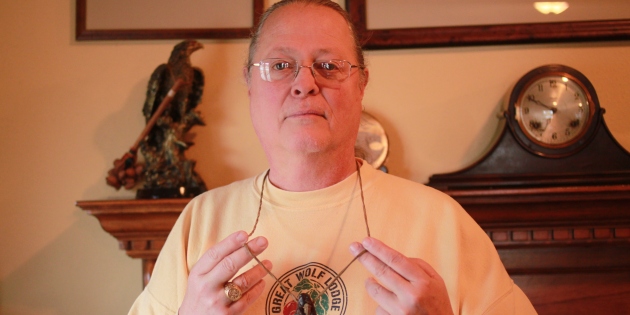 Terry Bonnau is a member of the local Saginaw Chippewa tribe and strives to actively keep his culture
and a message for human rights alive. (Sara Wiseman | GCmag)

Saginaw Chippewa elder and tribal member Terry Bonnau pressed his leather medicine bag (or mshkiki mshkimod) against his chest and gently rolled it between his fingers.

Bonnau, 59, spoke of the Mount Pleasant Indian Industrial Boarding School his grandfather and uncle attended. With federal money the school, he said, was an attempt to control the Native American people and eliminate their culture.

According to a report produced by the Ziibiwing Center of Anishinabe Culture and Lifeways, while the idea of boarding schools may sound mild or even consensual, in 1893 Congress allowed the Bureau of Indian Affairs to withhold rations to any parents stubborn to enroll their children. Children were often forcefully removed from their families and the complexity of regaining a child once in the boarding school was often overwhelming. Upon arrival to the schools young students were immediately stripped and disinfected.

“Long hair, valued for its cultural and spiritual significance, was cut,” the report stated.

Built with the purpose to teach and integrate American Indians into the workforce Director of Central Michigan University Native American Programs, Colleen Green believed education fell through the cracks in the boarding school facilities.

“This is an era that will never be forgotten as it was in motion to suppress our culture and acclimate us in to a society that wasn’t willing to see past the color of our skin,” Green said.

The focus of the boarding school in Mount Pleasant and facilities across the nation seemed to shift from integration to the abolishment of the tribal community and the Natives’ supposed evolution into Americanized civilization.

Bonnau had formed a non-profit organization in an attempt to acquire the local boarding school, renovate it and turn it into a positive place for Natives. The acquisition never happened but the tribal member has made a conscious effort to regain any part of his culture that may have been lost including his language, Ojibwe.

He looked down to his medicine bag calmly hanging around his neck and explained a small piece of culture. It wards away evils with four staple medicines: cedar, sage, sweet grass and tobacco. Bonnau then kicked himself for not “smudging” before this conversation, a practice of inner and outer cleansing that usually comes naturally to him.

“Without our language, without our being our traditions, our religions, we are not a tribe, we are not a separate entity,” Bonnau said. “We have to remain sovereign without the help of the U.S. government. We are trying to be mostly self sustaining.”

Part of this self-sustenance for the local tribes is generated from revenue gained from the Soaring Eagle Casino. The money for this thriving business and the tribal property was made possible by an 1855 treaty and money due to the tribes from the U.S. government.

“It’s paid for full and clear, it’s our business,” Bonnau said and mentioned that his great grandfather was a treaty signer.

The elder and tutor at the Saginaw Chippewa Tribal College has sensed animosity and forms of aggression from non-Natives over the success of the local casino. Even publications like the Morning Sun, he said, have the tendency to damn and condemn the entire tribe by labeling and overly specifying the racial identities of people when it’s not necessary or relevant.

According to Green (a member of the Little River Band of Ottawa Indians), backlash against tribes and against Soaring Eagle is dependent on the person.

“I sometimes hear people speak ill of Natives because of the money moving through the local casino, but I have also heard that in and around the other tribally owned casinos in Michigan as well as the casinos west,” Green said.

Misunderstandings of American Indian tribes are nothing new and are nothing that has fully dissipated. Often expressed in stereotypical portrayals, racism is constantly fought.

The stands at Central Michigan University are composed of maroon and gold painted bodies, school attire and flags adorned with the “Flying C” in what is called the land of the Chippewa. Twenty odd years ago it was headdresses and feathers, war whoops and tomahawk chops.

A people and their stereotypes were made into a mascot for a primarily white student population for showcase and money according to Bonnau.

“CMU has just recently come up with ways of being part of the community,” Bonnau said. “In the past they haven’t represented our tribe properly but now they are putting forth an effort to get on an equal level and deal with us as a government rather than something to pacify.”

Green held that the answer to true civilization and an understanding of Native culture surrounding CMU lays in a conscious effort of education.

“The reason I find it so important to stay involved [in the tribal community] is because you lose what you don’t use,” Bonnau said.