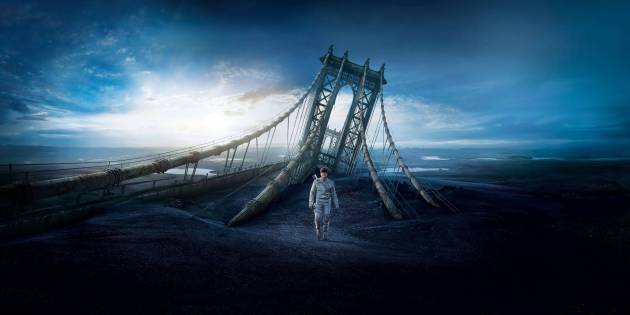 Machines are typically a main enemy in science fiction narratives, often stand-ins for the mechanical processes of fascism or bureaucracy .  This is true both in front of and behind the camera in Joseph Kosinski’s “Oblivion,” a dull, overdone futuristic movie that tries amicably to be more than the Tom Cruise vehicle it ultimately is.  It is so bogged down by needless special effects excess that its fine polish glosses over any semblance of life.

Set in 2073, “Oblivion” at first follows Jack (Cruise) and Victoria (Andrea Riseborough), two engineers who repair drones that guard resource mining operations on what’s left of Earth.  Of course the drones turn out to be evil, and Jack is forced to choose between helping those he once helped destroy (a pack of human survivors led by Morgan Freeman) or stay the course.  It isn’t really much of a choice, and neither the script nor the camera captures any rebellious spirit or sense of urgency.  There are a some well done firefights and amusing exchanges between Cruise and Freeman, but Kosinksi sacrifices all major opportunities for political commentary to indulge in them.

“Oblivion” obviously wasn’t intended to be much more than a sci-fi blockbuster.  It’s a star vehicle with a big budget that promises thrills and only somewhat delivers on them.  Even the word “drone” is enough to spark something in the audience, though, but the script uses it more as a buzz word to add meaning rather than expanding on it.

The movie is so sanitized and processed that it feels cold to the touch.  Even the love story between Jack and his long-lost wife Julia (Olga Kurylenko) never really has a pulse despite that performers’ best efforts.  Melissa Leo shows up in brief flashes on a computer monitor as a charmingly villainous commander from the main human ship, and Freeman’s charisma lifts the movie up in his brief scenes, but it’s not enough.  Cruise’s performance isn’t bad, but the story doesn’t take advantage of his physicality enough to warrant him even being here.  It’s a movie of spare parts that don’t go to the same machine.