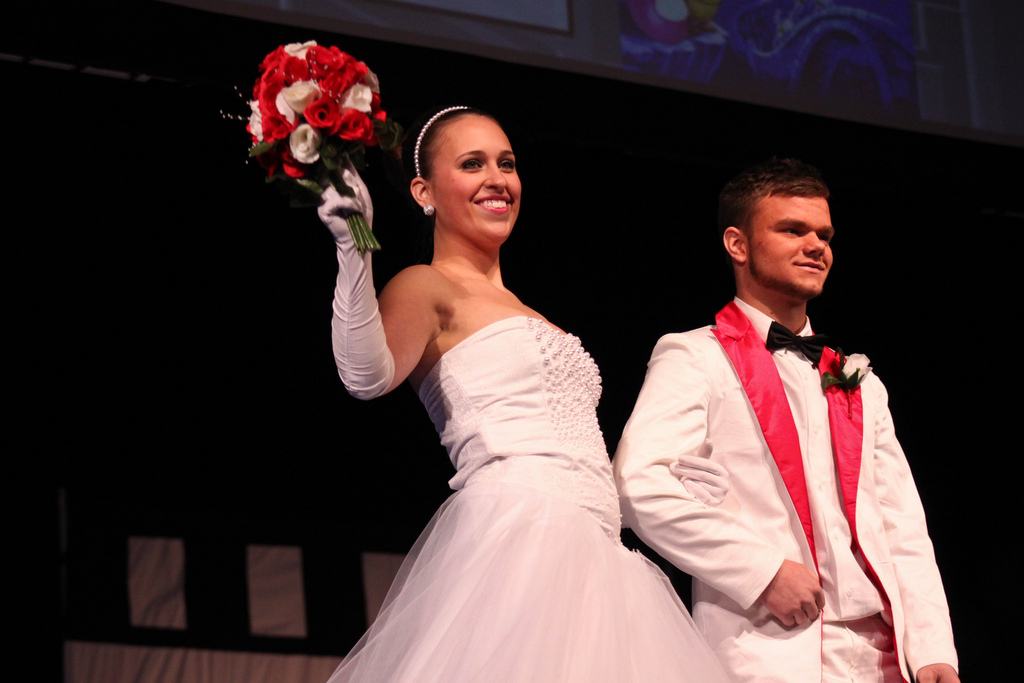 Plachta Auditorium was immediately struck by the chaos that is Threads on Saturday night. People were everywhere; ushers running back and forth, a long line at the ticket booth crowded with students dressed in their best.

A simple hallway and dressing rooms had been turned into a fantastical world of fashion; models standing everywhere, designers running everywhere, and makeup being traded back and forth amid the harsh heat in the confined space.

The first collection shown on the runway  looked like a gang of geisha with a penchant for high fashion and even higher heels.

Jason Gagnon, the senior designer and Threads super-veteran behind these pieces, is no stranger to producing his own collections; this was his fourth year to be involved in Threads.  For the last two years he has even helped produce the show.

His models were decked out in high fashion dresses, jumpsuits and jackets and each sporting a pair of ultra-high heels (Gagnon admittedly expressed some concern about those). The audience immediately understood his inspiration, the movie “Memoirs of a Geisha.”

Gagnon’s name was the big winner of the night, taking home “Best Collection of the Year,” “Best Interpretation of a Movie” and “Best Construction” awards at the end of the show.

One look at her models and the audience immediately saw the rock-and-roll ’70s influence of “Almost Famous.”

Ecstatic about being able to present her clothes in Plachta for the first time (Threads is usually in McGuirk Arena), Urda raved about this year’s group of designers, commenting that this year seemed more intimate to her year’s past.

One of Urda’s pieces, a 70s inspired blue jumpsuit, was modeled by senior Sam Addington, whose favorite part of Threads was getting to spend time with the other models.

“We’ve been practicing for days, and going in for fittings for weeks, so we really bond,” she said. “I’m a little nervous about the heels, mostly because I want to do Malorie’s clothes justice; she’s great at what she does.”

Leaping from the age of rock to the timeless nature of the African Plains, the night’s most decorated collection went to Kristine Opaleski, whose “Lion King” inspired collection claimed winner of the “Best Runway Presentation,” “Best Construction,” “Best Accessories and Embellishments,” “Best Use of Fabric” and co-winner of “Collection of The Year.”