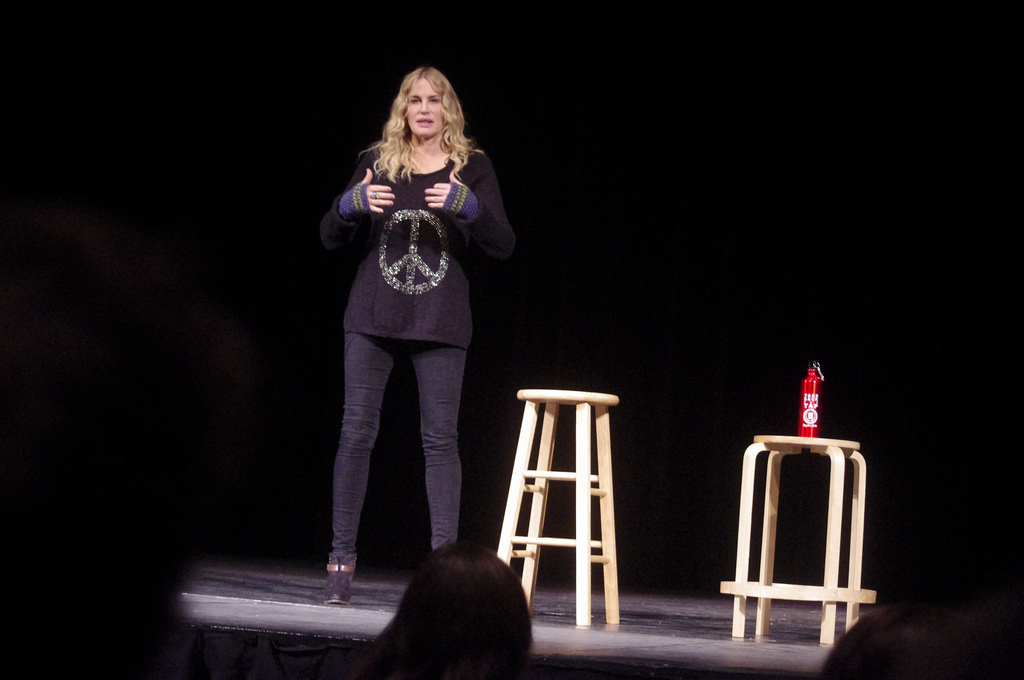 Actress Daryl Hannah has an impressive body of work. Among 50 other titles, she is known for her parts as a mermaid in “Splash” and a one-eyed assassin in “Kill Bill: Vol. 1.”

“I hope I am not leading the discussion,” Hannah said before the event. “I hope the audience tells me their questions and concerns. I don’t have a plan because that is the nature of a true conversation.”

Hannah discussed several issues with the audience including food, global warming and erosion.

“I don’t consider myself an environmental activist because I fight just as hard against slavery as I do about having uncontaminated water,” Hannah said. “Social, environmental and issues with other species are all one in the same. I fight against things that just wrong.”

Shelby Township junior and Integrated Public Relations major Mark Fairbrother was the student leader and organizer for Earth Week and said Hannah was the choice for keynote speaker because of her success as both an actress and activist. It was the balance between her two passions that was the most intriguing, he said.

“We picked her because she has such a diverse history,” he said. “She is an actress that has starred alongside Charlie Sheen, Tom Hanks, Julia Roberts and Uma Thurman.  However, she also been on front lines in many areas in the environmental movement.”

Hannah said that she hasn’t had many issues balancing the two different worlds of acting and activism.

“My life is my life, my work is my work,” Hannah said. “At my productions, I will ask them to not use Styrofoam plates and cups and to put recycling bins on sets.  Usually most of them have been willing, if not eager to make the changes because it ultimately saves them money.”

However, the actress has done more than politely request recycling bins. Hannah has been arrested five times for her activism. The most recent arrest came in 2012 after protesting the construction of the Keystone XL pipeline in Texas.

Recognized for her outspokenness and civil disobedience, Hannah admits she wasn’t always so assertive in her beliefs. Diagnosed with autism as a child, she remembered being painfully shy. And while she still has some struggles, Hannah admitted feels the need to speak out.

“I think it has been learning about the issues we face that has forced me to go out my comfort zone and realize that I do have those issues, but they’re small compared to what are facing,” Hannah said.

The activist shared that her decision to become a vegetarian at age 11 sprouted from her attachment to a calf she later learned was going to slaughtered for veal. Afterwards, she said, it was impossible to distinguish between food and an animal.  From her conscious change in diet, her activism became gradual.

“At a certain point I realized that if I didn’t share the information that I wouldn’t be taking advantage of the platform I have been given,” Hannah said. “(My intent) is not to tell people what to do, but to inform them and let them see if it interests them. I want to be as effective a human being as possible.”

Hannah said that her passion for spreading information about environmental and humanitarian issues derives from her love of life and her species in general.

“It is surprising to me that more people are not more worried,” Hannah said. “It is common sense to fight for the survival of your species…My passion comes from my survival instinct and common sense.”

However, according to the actress, not even someone with a fan base and media draw will be able to make a change unless people stand as a collective.

Victoria Ploe, a senior from Flint studying Integrated Sciences for Elementary School Education, said she attended the event to explore environmental issues and to find a way to instill enthusiasm in her future students.

“(This event) ignited my passion and my understanding of what I can do right now,” she  said. “I can make small changes become big changes. Seeing her passion made me want to explore mine.”