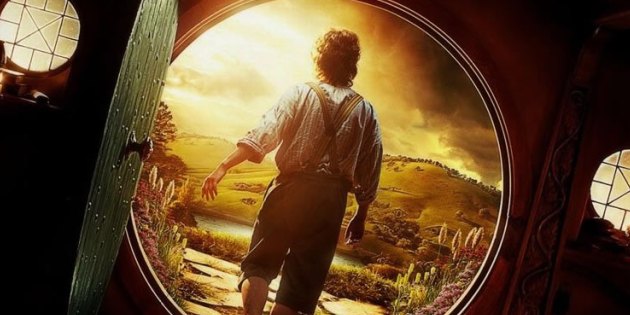 Peter Jackson established himself so well with his take on “The Lord of the Rings” books that he became indistinguishable from them.  After the ill-received mix bag that was 2009′s “The Lovely Bones,” he has retreated back to J.R.R. Tolkien’s first Middle Earth novel, “The Hobbit.”  Jackson’s storytelling confidence has returned to him in spades here, though drawing out one book into three separate movies that clock in at close to three hours seems like a money grab, especially after viewing this somewhat bloated first installment.

Much like the last film in “Lord of the Rings,” this first “Hobbit” segment, called “An Unexpected Journey,” doesn’t quite know when to end, so it just keeps going.  It is full of the scenic New Zealand grandeur and sweeping camera motions that made the earlier movies so visually thrilling, but the tone is much more slapstick.  This is because the dwarves, which were largely comic relief in “Lord of the Rings,” are front and center here, along with the hobbit Bilbo Baggins (Martin Freeman) and the wizard Gandalf (Ian McKellen).  Freeman and McKellen are both excellent, but there are few stoic, serious elves or gritty rangers to balance out the obnoxious dwarves.  When contrasted with the brutal fantasy series of HBO’s “Game of Thrones,” it’s almost child’s play at times.

I say almost because despite the flamboyant, boisterous dwarves, there is still real danger and violence in this world.  In fact, in addition to more slapstick, there is also more beheading and dismemberment than in “Lord of Rings.”  Jackson uses flashback to inject action sequences into what would otherwise be lulls in the story.  He creates conflict to make more things feel at stake than actually are.

Much of the book is about Bilbo, Gandalf and the 13 dwarves’ quest to steal treasure from Smaug the dragon.  Jackson adds in the great white orc Azog, only briefly mentioned by Tolkien, in order to conjure up more battle drama, as well as having the dwarves seek to reclaim their home in the mountain as well as treasure.  This is where the movie runs into problems; these elevated battles aren’t nearly as interesting or jaw-dropping as “The Lord of the Rings“ because nothing really feels at stake.  The masterful digital creatures are grotesque and frightening, but none of them are as memorable as Gollum (Andy Serkis).

Gollum was a milestone of CGI performance in “Lord of the Rings,” and Serkis has since gone on to become the most famous and talented digital performer working today.  It is an exciting new acting medium, and Bilbo’s game of riddles in Gollum’s cave is effective precisely because it isn’t flashy or epic.  It is a mesh of great performance and slowed down pacing.  Usually when the pace slows down, as it does noticeably every hour or so, Jackson overcompensates by tossing in an unneeded mini-battle.

This is precisely why “The Hobbit“ should’ve been whittled down to two movies.  There are enough slower parts that worked well on the page that could’ve been cut for the screen, and instead of doing that, more action sequences and unnecessary detours were added.  The most useless of these concerns a second wizard, Radagast the Brown (Sylvester McCoy).  The acting, make-up and filming of his sequences is so over-the-top stupid that it makes the dwarves seem tame.  Compared to McKellen’s class act as Gandalf, it is laughable.

“An Unexpected Journey“ is not as disastrous as Radagast’s brief presence, though.  Jackson is a supreme director of fantasy and action, and if this one is slightly disappointing that’s mostly because it’s being compared to the greatness of both the book and films that preceded it.  It is often thrilling, and though three films seem like a stretch it isn’t unbearable thinking about sitting through two more, especially considering the dragon still has to show up.