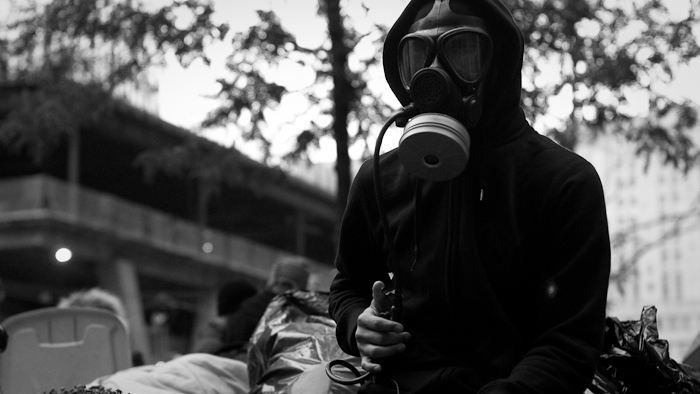 The Occupy Wall Street movement has spread across the entire nation and has become the focus of nearly every news organization as of late. Many reports covering the protests carry with them an exciting sense of revolution against tyranny within our country. Tyranny? In the U.S.? Yep.

Good ole tyranny has been around for ages. It should have went extinct before the bald eagle but it’s just too damn hard to catch. Oppressive forces? Excessive government control? Couldn’t be. You may be thinking, “Tyranny? Nah … that’s what we have the First Amendment for!” Or maybe, “What about our rights?”

Well, what about our rights? The right to life, freedom of speech, the right to vote, the right to welcome obesity — the list stretches. As citizens, we enjoy a supposedly inalienable freedom never to be compromised by our government.

But with each passing day, our rights are becoming jeopardized by those who have sworn to uphold them.

Recently, student protestors at the University of California used their First Amendment rights to passively assemble at an Occupy movement on campus. As pointed out in the horrific video, the students are seated forming a chain link in an attempt to block a sidewalk from police in its attempt to un-occupy the Occupiers.

What were the students met with? A police officer issuing a point-blank stream of nauseating pepper spray directly to students’ faces. Some officers are seen trying to physically move the students after the altercation. The crowd of students and spectators chant “Shame on you!” and scream in protest.

It is clear in the video that the students are not resisting and that the police have plenty of room to go forth with its agenda — which, again, obviously has something to do with the oh-so-righteous motto, “to protect and serve.”

The consequences these “authority figures” endure for their actions are petty and laughable. An officer who pepper sprayed an 84-year-old woman (more likely than not a grandma) was stripped of 10 vacation days after an internal review of the situation.

Great, the police department deciding its own measures of discipline for its officers’ questionable practices. Oh, and the mayor offered his apologies to the elderly activist. Justice served!

Simply following orders from those higher in command can become a completely illogical concept and in no way a justification for unjust actions. If you have any sense of rational, common sense or free thought, you’d be able to identify right from wrong without having to answer to a superior.

I think George Carlin had it right (among many other things) when he contended that there’s no such thing as rights in this country. Sure, they’re written in the Constitution. You’re bound to hear them mentioned in one of your classes or see them flaunted in a textbook somewhere. But the rights guaranteed in the Constitution are continuing to move away from an applied standpoint and closer to that of a theory approach — a nod to an Orwellian concept.

One of the benefits and most important capabilities of the press is its ability to expose corruption. Be it governmental abuse of power, political scandals or in this case police misconduct, sadly there is corruption anywhere you look — that is, if you look closely.

Ultimately even more senseless and appalling is the fact that oftentimes corruption is stained red in the hands of those responsible to “protect and serve.” Police misconduct is easily observed, disgustingly overused and destructive to pure revolution and every notion of freedom.

I urge the protester spirit to continue in the name of what is right and against those that are wrong. Exercise your “right” to peaceably assemble and stand up for what you believe (or if you are from the University of California, sitting down might work just as well).