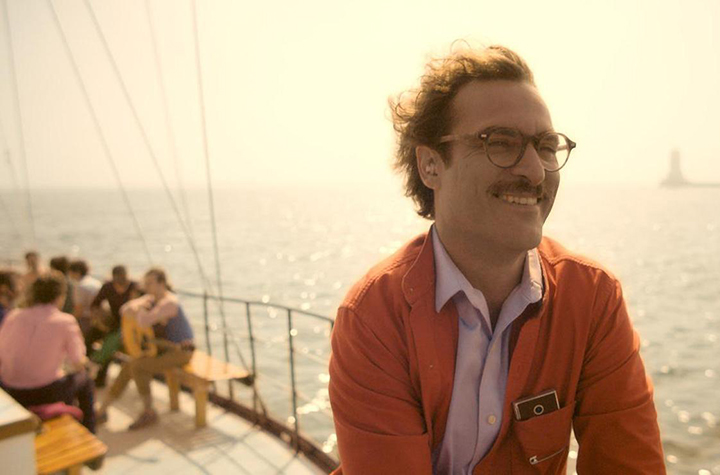 This post kicks off a series of articles leading up to the Oscar ceremony on March 2.

SAM: “Her” is one of the most lauded films of the year, and so it comes as no surprise it’s been nominated for Best Picture (among other things). Spike Jonze’s future-romance focuses on the relationship between Theodore Twombly (Joaquin Phoenix) and “Samantha,” his new operating system (voiced by Scarlett Johansson) — a high-concept if there ever was one. And if this all sounds like a fascinating commentary on our troubling relationship with technology, well, it isn’t.

I saw this movie a month or two ago, and, after loving all of Jonze’s previous directorial efforts, it seemed poised to become a new favorite. The talent involved is tremendous, the world-building is rapturous (the future has never seemed so tender and warm), Jonze is a more-than-capable director — so, why did this movie leave me so cold? The answer is simple: beneath the film’s appealing production design and moments of brilliance is a stone-cold interior as manufactured as “Samantha.”

Instead of following through on his ambitious premise and offering some sort of erudite statement on the pitfalls of our love affair with technology, Jonze is content to settle in on Theodore’s love life with exceedingly distant results. “Her” plays like a glossy “How to Make an Indie Film” tutorial video; its emotions all telegraphed to please. Audiences like slick montages of Theodore holding a sparkler and twirling with Samantha, but what is this actually supposed to signify? My guess is not a whole lot.

Jonze’s nomination for Best Screenplay cracks me up, because this thing feels like a first draft: the central character, despite a wonderful performance from Phoenix, is an embodiment of quirk (Theodore Twombly? Really?), and the film has little to say in its “deep sentiments” about love, which tend to feel half-baked and meandering; Jonze falls back way too often on easy devices to muster up feeling (the plentiful montages and bedside chats create a surface imitation of love, isolation, etc., and it’s something I found woefully transparent).

I will add in that I found a few scenes to be remarkable: the “sex scene,” where Jonze cuts to black and leaves the audio running, was a transcendent moment in an otherwise middling film, and I only wish there were more scenes that felt so alive. Maybe I’m just being a cynic, but the more I think about this movie, the less I like it. How about you, Kelly?

KELLY: It’s difficult to properly express my exact feelings on the film, though I definitely agree — and disagree — with a lot of your points. The scene with the sparklers definitely felt like something out of “Cute Romantic Montage 101,” and Theodore is essentially a bundle of lonely nerd clichés sewn together to form a human resembling Joaquin Phoenix. I can’t help but consider, however, that making Theodore such a closed-off person who has recently had problems expressing himself through anything besides his card writing job is part of what makes the movie work.

If somebody were to fall in love with an artificial intelligence, there is a good chance it would be somebody who hasn’t hung out with a lot of people recently and just wants someone to talk to. Though I agree there isn’t much to the script, the actors and fascinating premise go a long way. Even though we know little about Theodore, one flash of Phoenix’s face, scarred from much disappointment and heartache, tells us everything we need to know about the character. Phoenix creates someone who feels extremely real out of something sketched out in the script. You may or may not agree with me on that. I do have thoughts on other aspect of the film, but that was something that I felt I needed to touch on right away. So basically: Phoenix: 5, Script: 1.

SAM: I agree with you on Phoenix. He’s clearly the best actor we have right now. If this isn’t the strongest role he’s filled it’s largely because of the mawkish script from Jonze. Putting these issues aside for a second, though, I would like to mention the aspects of this film I appreciate. There is the sex scene that I mentioned, but there is also the scene with the sex surrogate. Both of these felt like Jonze, from a writing standpoint and a directing standpoint, and was reaching for some really interesting ideas regarding Samantha’s tangibility to Theodore. Even if I ultimately didn’t connect with much else going on, these two moments, along with a few others, are when I felt completely on the same wavelength as the director. I wish Charlie Kaufman had written this script. It could have been a masterpiece in different hands.

“Her” is nominated for Best Picture, Best Production Design, and Best Original Score. I believe it should win Best Production Design, considering it is the most impressive part of the film and none of its competitors come close, and Best Original Score. It will not win Best Picture, and I’m pretty OK with that, even though it is one of the best films in the running this year. To put it bluntly, this movie is too safe and lackluster for me to embrace and too uneven for me to completely dismiss.

KELLY: I know what you mean about the unevenness, but I have to admit I had trouble recalling the elements I didn’t like about the film based on the strength of the parts I did like. A film studies class would have a field day with the sex scene and the sex surrogate scene. But if those scenes will be discussed and dissected, it is because they are so well done and open to interpretation. If I may give something away for a moment [*SPOLER ALERT*], I’m not sure I will ever forget the look on Phoenix’s face when he finds out Samantha has been cheating on him with about 700 other people. [*SPOILERS OVER*]

The heartbreak of that scene stuck with me. So many people have felt what’s it’s like to have a world of possibilities and dreams built up with another person at the center of it, only to have it crashing it down. At the same time, however, Theodore sometimes feels like such a cipher that we automatically reflect on how we would feel in that situation, because we don’t actually know anything about Theodore.

One could obviously argue that we don’t need to know the history of a character or that much about a character in order to be compelled by their story. I often agree with that. In this case, however, there are times where he feels like so much of a stereotypical nerd (albeit a stereotypical nerd in a love story that we haven’t quite seen previously) that we don’t need to know much about him.

He keeps to himself, he uses video games and technology to occupy himself and more or less be his playmates, but underneath it all, as you said, he is a sensitive soul. Despite Phoenix’s brilliant performance, I’m not sure the nerdy template is taken anywhere new. So, basically, for the Too Long, Didn’t Read crowd: I thought that too much of the main character’s personality could be inferred on based on what we know about nerd stereotypes, but I liked it more than you did, Sam.

SAM: Fair enough. Give me “The Wolf of Wall Street” over this trite film any day of the week. No thanks.

Keep checking back for more Oscar material through the week.