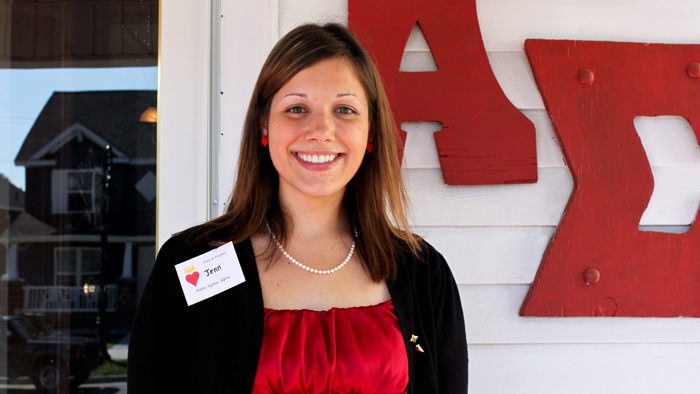 The following Outstanding Greek of the Week is a part of an ongoing weekly column focusing on Greek Organization members who are doing good things around campus and the community.

Outstanding Greek of the Week:

Being in a sorority can have a lot of time commitments especially when you are taking a full-load of classes.  But for Jenn Sula, vice president of recruitment for Alpha Sigma Alpha (ASA), it is not the only organization she is involved in.  Sula joined ASA in Spring 2009 and has stepped up her leadership roles because of her chapter.

“Greek Life has taught me so much about myself, and without it, I would have never seen myself as a leader,”  Sula said. “I always considered myself a follower until my chapter encouraged me to run for a position.”

Sula, who is an integrated public (IPR) major with a double minor in broadcast and communications, also co-leads a bible study in her chapter and is active in Greek-Intervarsity on Central Michigan University’s campus. In 2008, Sula and a group of women on campus started the Alliance for Women in Media, which is an outlet for women in any media and open to all fields.

“During my sophomore year, I was president for the RSO but I have held other positions such as secretary and treasurer,”  Sula said.

Not only that, but she is an active member of Rho Lambda, a volunteer and service organization and is a Greek 101 Intern.  Sula along with two other Greek members helps to plan and run the new member program during the spring semester including planning the food, speakers and conducting interviews for facilitators.

“We deal with the issues of hazing, drinking and stereotypes,”  Sula said. “We try to fit in as much information and make it as fun as we can during a five hour period on a Saturday.”

Sula uses time management by using her time as the Greek 101 intern, to count for towards a 40-hour internship required by one of her IPR classes. As the communications part of the Greek 101 team, Sula has been working on doing more public relations for Greek life and all of its aspects.

“I can use my experience and knowledge from my major to get the word out about all the Greeks, not just social,”  Sula said. “And to make communication better between Greeks and the community and campus.”

And that is still not all, Sula is currently interning for University Communications and has a job at the university library.