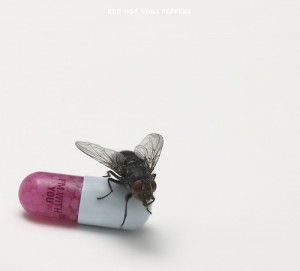 John Frusciante, lead guitarist, virtuosic genius and rock savior, has quit the
Red Hot Chili Peppers. Just thought I should get that news out of the way early in
case you’ve been living under a rock, or the Upper Peninsula, and didn’t hear it from
the music websites, the magazines, the constant speculation, or the widespread panic
from fans worldwide.

That panic is well deserved, because for a long time now
Frusciante has been the creative force that has kept the Red Hot Chili Peppers afloat,
writing some of the Chili Peppers greatest hits, including “Zephyr Song”, “Can’t
Stop”, “Californication”, “Scar Tissue”, and the boisterous, if slightly annoying “Give
It Away.” With Frusciante leaving the band to focus on his acclaimed solo career, he leaves
the remaining Chili Peppers to contemplate whether they should continue their own
acclaimed career; the only problem is this time, it’s going to be without Fruscianti.

Of course, like most bands that have been around since the parting of the Red
Sea, the Red Hot Chili Peppers have sunk into a rather comfortable formulaic routine,
repeatedly making the same album they have made since Clinton was elected. Rewriting the same album time and time again has never really been a problem for them, because, one way or another – they have always gotten away with it.

This is partly due to the fantastic musicianship and energy they display on a consistent basis, and mostly because they’ve written enough hits to outlast Lady Gaga for at least the
next eight years. So it comes as no surprise that the album that they released without Fruscianti is the same album they would of released with Frusciante.

Like every album, Flea’s pulsating base is prominent; the verses are explosions of cheap thrills and
groove, and the refrains are soulful yet standard affairs. Anthony Kiedas, the vocalist,
yelps, raps, sings, and on the song “Ethiopia”, even beat boxes Old McDonald, because
he’s just that hip.

Kiedas’ lyricism, as always, ranges from questionable to incredibly stupid, with terrible pick-up lines, “Tick tock I want to rock you like the eighties”, attempts to sound clever. “She was the cutest thing that I ever did see. A drink in her hand and I don’t mean tea”, and some things that just don’t make much sense at all.

“All my life, I was swingin’ for the fence/ Always lookin’ for the triple/ Never playing good defense.”And just in case you still aren’t sure that this is a standard Peppers album, all but one of these songs are about sex – of course.

Unlike their last several albums, however, everything doesn’t go smoothly this time. The musicianship is still impressive, and Klinghoffer, the former sound tech brought in to replace Frusciante, does a decent job of standing in his place. Most of these songs are still deadpan catchy, and the band still shows every sign of being able to jam with the best of them. But compared to the bands illustrious past, everything on the album just seems forgettable.

The single “Rain Dance For Maggie” tries to combine the intensity of “Give It Away”, and the infectious nature of “By The Way” but comes nowhere close to either. “Look Around” aims for smash-hit “Dani California” and misses badly. “Police Station” attempts to replicate the emotional “Californication” with lackluster results.

Unfortunately for the Chili Peppers, when it comes to the execution of their standard
routine, after an unbelievable half-decade, their hit-making quality is finally appearing to
dip.

Adding to the problem, the album features little to no musical ingenuity, and the times when they do attempt to vary it up are mixed at best. “Did I Let You Know” features an unexpected saxophone solo that works beautifully, bringing the song alive at an unexpected moment, and Josh Klinghoffer’s vocals are used brilliantly in “Did I Let You Know’s” refrain, making it easily the most successful song on the album.

Unfortunately, other times – it all falls flat. “Brandon’s Death Song”, while trying to be the most mature and touching song on the record, instead plays out like the bouncing pop song that it, and every other song on the record, is. “Happiness Loves Company” and “Police Station” attempt piano rock, but there’s a clear reason why you never see the Peppers covering Elton John, because it plain out doesn’t work.

Perhaps, most awkward of all is “Even You, Brutus” featuring Kieidis hysterically and theatrically shouting over piano and muted guitar, which, when contrasted with the traditional funk showcased in the rest of the album, sounds just about as out of place as a group of Amish at a rave.

Don’t get me wrong, this isn’t a bad album, but at the same time, there just isn’t much great about it. It’s an album that shows a band stagnated. Not moving forward and fighting not to move backward and therefore going absolutely nowhere.

Frusciante’s absence is missed on the record, and not just for the mind warping guitar solos, but more- so, because the Red Hot Chili Peppers just don’t have the same spark without him. Which leaves us with a forgettable, predictable, and ultimately complacent album.

Even when compared to the bloated Stadium arcadium, it just doesn’t stand up …but hey, Chili fans, don’t get too down, because on the bright side – at least it’s catchy.