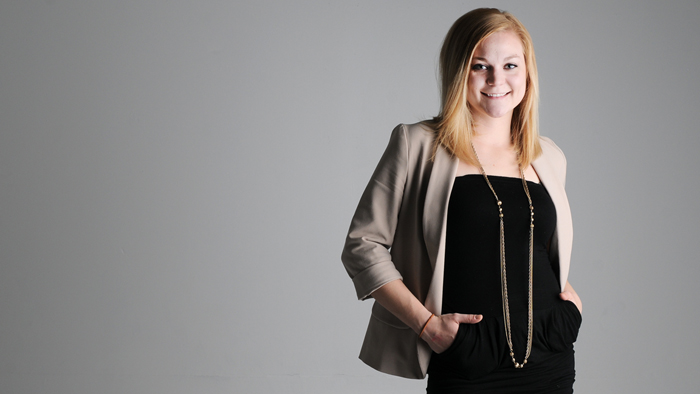 Unlike past shows, the new THREADS fashion show producer will not be sending a collection down the runway this spring.

Senior Laura Czupinski is different from producers in the past because she is not a design major, but a apparel merchandising major and event management minor. Czupinski’s background in event planning and promotions made her a great match for the  co-producer position. She is able to focus more on the show, and does not have to stress about producing and designing.

Czupinski will be working with second time producer Jason Gagnon.

“Jason and I are having fun with it,” Czupinski said. “I think we’re just having a good time with our personalities.”

Czupinski said her organized way of doing things and ability to accomplish goals made her right for the position. Formerly the Vice President of the Fashion Association of Merchandising and Design, Czupinski organized events for the group as well as for her minor classes. She said she was able to learn how to produce and plan events which made her want to produce for Threads.

“I really wanted to get involved in making it better,” Czupinski said. “Its always great organizing an event.”

The producers are also planning a fashion week leading up to the show on April 14, 2012. Czupinski said they wanted to showcase everyone’s hard work and make the entire week fun for everyone. Czupinski said they hope to get professor involvement, an exhibition at the art gallery and have a fashion show in the middle of campus.

Czupinski and Gagnon still want the emphasis on the designers, but are also creating leadership position for both design and merchandise students to get involved in. There will be new coordinators including communications, runway, media, exhibition, backstage and fashion week.

New requirements for designers and those involved will be to attend at least one fundraiser in the fall and two in the spring. Czupinski and Gagnon hope to do a coat drive and food drive.

“We wanted to focus on the community since we are such a big production,” Czupinski said. “We wanted to give back.”

Czupinski said she considers the position another class and puts a lot of time and effort working during the week. She will be focusing more on management, advertising and promotions for the show, but her and Gagnon do all the planning and work together.

“I feel like we make a well rounded team,” Czupinski said. “We have created a more structured organization.”