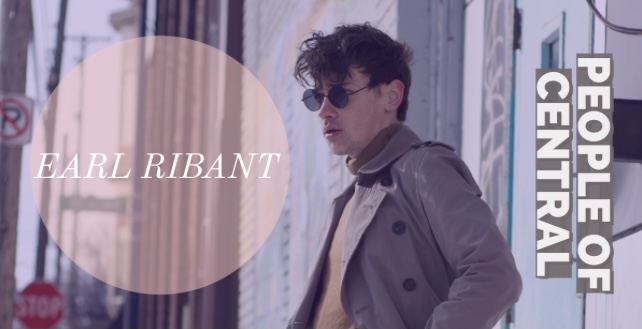 Story and photo by Kersten Kruse

Imagine being a first-semester freshman. You’ve just arrived at the city of Mount Pleasant and plan to shop for dorm room essentials at a store near campus. You feel confident in the new outfit you purchased for the occasion, taking a selfie in the car before exiting the vehicle.

As you step out of the car and take in the scenery, you’re greeted by multiple people – all of whom are staring at you.

You wait for the people to walk away, but instead, they start to whisper. You notice that they’re not only talking about you, but are discussing your outfit, too.

This is what daily life is like for Earl Ribant, a fashion merchandising and design student.

The Central Michigan University junior hails from Macomb, Michigan. He always knew that fashion was something he wanted to pursue at the college level, which made CMU a clear choice after graduating high school.

Ribant said he’s more interested in the design process, but holds a merchandising minor to sustain a well-rounded understanding of the industry.

While attending CMU, Ribant has felt conflicted about the town of Mt. Pleasant. He said he adores the strong student body and everyone’s passion regarding their programs. However, he feels like the town lacks culture and can be intimidating to outsiders.

“As someone who has more of an abstract style – an anti-midwestern style – it can be intimidating being in a town that’s full of conservative ideals. Not only as a gay man, but as someone who expresses themselves with clothing,” Ribant said. “I get stares when I go on campus. I get stares when I go to Walmart. I have to be very confident in what I do and who I am, especially while in Mt. Pleasant.”

He says there’s been moments where he woke up, got ready and felt wonderful in his outfit of the day. Then, he’d take one step outside and witness three people stare at him immediately. Ribant said, in cases like this, he’d turn around and change into a hoodie and jeans.

When in class, Ribant feels a similar type of anxiety. Often, he’s the only male in his upper-level courses, attracting everyone’s attention when he enters the room.

The female-dominant gender majority also impacts his coursework, which Ribant says is similar to most industry trends: much of the work is focused on women’s apparel.

“I definitely would say women’s fashion is something that’s always been a focus in in the industry and at CMU,” Ribant said. “Because coursework has been targeted more towards the female demographic, I haven’t been able to learn about menswear as much… I can’t design clothes for myself as much as I could a woman.”

He continued by saying “I do enjoy being an individual person and being the only male isn’t a huge struggle, but I do feel like I have a lot of pressure on me because it instantly singles me out – regardless of class size.”

Although the attention is anxiety provoking, feeling alone within his major – or on campus as a whole – is not a regular occurrence, Ribant noted. He said the students at CMU seem to be very understanding. If anything, he said, college students have made the town of Mt. Pleasant more accepting.

An example of this is Cooper Manning, Ribant’s best friend. The two met freshman year while living in the same dormitory.

Manning is a junior studying business management who has lived with Ribant for two years. Manning was one of the few people who supported Ribant directly though encouragement with assignments, projects, and helping expose him to programs and clubs.

“He was my number one supporter who made sure I succeeded and thrived,” Ribant said.

Manning says it’s hard to describe Ribant because they spend so much time together. As his best friend, he sees Ribant’s best qualities on a daily basis.

“He’s the most fabulous person you’ll ever meet,” Manning said. “He’s just not an ounce of boring. There’s nothing boring about him.”

Manning said one of the reasons they bonded so quickly was Ribant’s ability to be straight forward, but very approachable. He reflected on a time freshman year where he sought fashion advice, and Ribant gave him a style-overhaul.

“When I first came to CMU, I had no fashion sense,” Manning said. “The first time that I actually sat down and talked to Earl about clothing, he helped me understand what I’d been doing wrong.”

Aside from teaching Manning about clothing, Ribant has also been credited with teaching him about empathy.

“Now that I’ve met Earl, I always try to look at things from other people’s perspectives and try to interact with them through understanding – try to understand their situation better,” Manning said.

Since meeting Manning his freshman year, Ribant has extended himself into multiple areas of the fashion industry. He created an Instagram platform for the university’s fashion program, which requires digital skills, and tutored other fashion majors in sewing labs, which requires the technical skills taught by professors within the program.

COVID-19 has created some concern for Ribant in terms of his future. Regardless of the pandemic, though, he said CMU has a reputation for helping students land internships in a timely manner before graduation.

Consistent help from mentors with cover letters and resumes are what make him feel confident about starting his career in fashion post-graduation, he said.