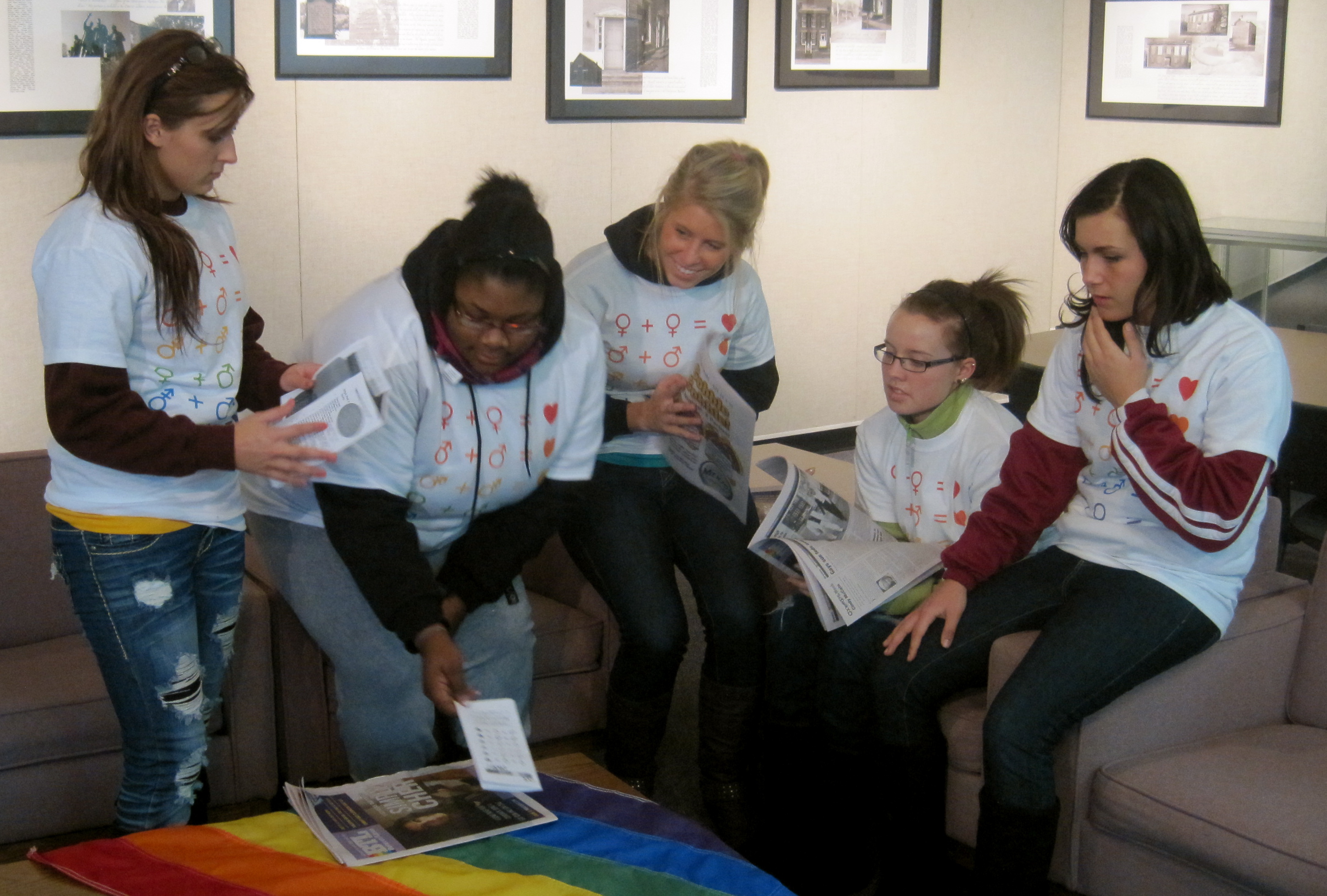 It all began with a t-shirt and a quote. As the end of the fall semester winds down, students and staff ready themselves for finals week. While most classes have final exams, Betsy Rau offered her JRN 380 students a different type of final project. One of the many options offered for the final project included working with any of the offices on Central Michigan University’s Campus that dealt with diversity.  Since 380 is a university program course (U.P.) not all of the students are going into any field associated with journalism, the students could work in groups and use their skills to do something for that department. One particular group chose to do a very hands on job for the Office of Gay and Lesbian programs and try to impact campus with their assignment.

“It was important to me, because I feel that many people do not know much about LGBT people, so it felt rewarding to know that I made an effort to create awareness, educate people, and hopefully change at least one person’s beliefs on sexual orientation,” Natalie Sulek, an undecided major, said.

Lesbian, Gay, Bisexual, Transgendered, and Queer (LGBTQ) Equality was a cause dear to all of the ladies heart and that’s what brought them together on the project. The group, consisting of Sulek, Paige Wilson, Kaylee Turnwald, Vanessa Stewart and Danielle Cook, decided that the project would entail the making and wearing of t-shirts while passing out brochures containing little known facts and resources to people of the LGBTQ community and straight allys. The group also filmed their experiences and made a video  to present to their class mates and the world through international website youtube and facebook.

Even though this was a final project for a class, its effects expanded beyond any classroom experience for these group members. The work this group did, was seemingly more than a project, it expanded into their personal lives and came from their hearts.

“This project was important to me because I have seen the effects that hate and disrespect take on a person,” Turnwald, Integrative Public Relations and Apparel Merchandising Major said. “My younger brother is gay. I love him more than anything and it absolutely disgusts me to think that he will be treated differently in his lifetime.  I cringe at the thought of his life being rough just because of his sexual orientation. No one deserves that.”

Director of the Office of Gay and Lesbian Programs, Shannon Jolliff, was thrilled when she was approached for the project.

“I was just so excited because of the opportunity for information to be shared with campus that didn’t come from my office,” Jolliff said. “I thought it would be a great way for [the students] to do some research and learn some things they may not have known.”

She even funded the cost of the group members to order the printing of the t-shirts designed by group member Paige Wilson.

For those who are interested in what else the office of Gay and Lesbian Programs does, the main event they host every year is pride week in April. The office, located in the Bovee University Center 125 also hosts Safe Zone workshops once a month, a coming out panel where Jolliff and students speak on their experiences and Jolliff goes around throughout the year speaking and presenting to classrooms.

“I just wish we could get the same turn out for the drag show at all the other events but I understand the stigma and the fear associated with being labeled,” Jolliff said.

To keep up to date with any events or even find out how to get involved with Gay and Lesbian Programs, visit their website orFacebook fan page.

It is clear that through this project, Professor Betsy Rau has accomplished more than just teach a course. She has allotted students the opportunity to go out into the world shape their own views and work together to impact a change on campus. She has guided them down a path to be a part of something much bigger than themselves.

“Be aware, raise awareness. We’re all human beings, no matter what we believe, who we are as a person or the things we do. At the end of the day we’re all human and that’s all that should matter,” said Turnwald.  As the back of the shirts read, “Love (n.): a devoted attachment and passionate affection for another person.  No matter what gender.”