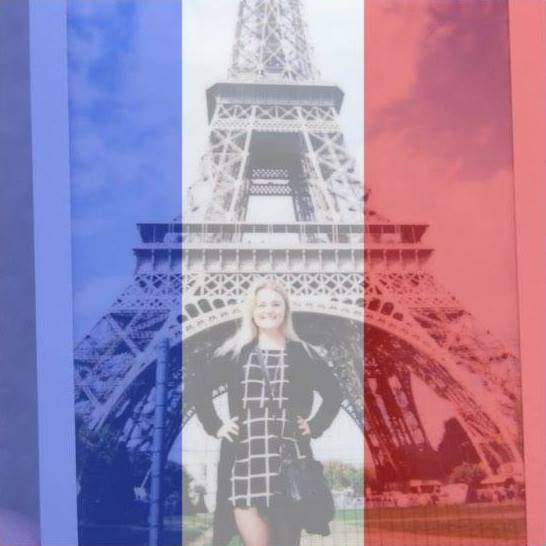 Study abroad is one of the greatest opportunities provided by Central Michigan University in order to connect students with various cultures across the world.

Not only does the program help to enhance skills regarding a specified students major, but it allows an experience that changes one’s perspective on life.

Senior Kelly Miller, is a CMU student studying at the Paris American Academy for the Fall 2015 semester. Her classes at PAA teach sewing techniques, European business, French history and language.

This experience will not only look good on Miller’s resume, but also has changed her life due to her growing connection with the French culture.

On Friday, Nov. 13. Paris was one of the cities targeted in a terrorist attack that left over 350 injured and over 100 dead. With such an unexpected threat, Paris residents were advised to stay inside due to the high risk of the city. Miller was one of the first students marked safe from CMU, which left a relief to family and friends stateside.

Editor’s Note: The original interview with Fashion Merchandising and Design major Kelly Miller was conducted before the attacks on Nov. 13. Miller was then contacted after the attacks to assure her safety.

Grand Central: With such tragedy that happened in Paris, how does it feel to see support from people across the world?

Kelly Miller: It’s always amazing to see the world come together in times of tragedy. During such a devastating time, it serves as a nice reminder that the world really is full of good people, and France doesn’t have to deal with this alone.

As an American, I think that I experienced these events differently than the French did, but the way that Paris has come together as a community makes me feel very connected and a part of this place. I think that has made me even more appreciative of the support from around the world.

GC: What influenced you to study abroad in Paris?

KM: I have always valued the knowledge gained through traveling, which guided me to make the decision to study abroad. Paris is one city that I had never been to, but always wanted to see. Plus, since I am studying fashion merchandising and design, Paris was the perfect fit for me.

GC: How would you describe the French community and your personal interactions?

KM: I only have positive things to say about my interactions with the French community. There is a stereotype that Parisians are rude, and from the very first day that I arrived in Paris, I found this to be nonsense. I have been very welcomed in France and had a lot of enjoyable conversations with Parisians sharing my American lifestyle.

GC: How has your study abroad decision change your perspective on life?

KM: Studying abroad has given me a new respect for different cultures around the world. I have traveled abroad before, but I have never had the chance to live in a foreign country and experience the lifestyle fully. When studying abroad you learn a different way of life, which I think helps you understand people in a new light.

GC: What is your favorite location in Paris and why?

KM: In Paris, it is hard to pick one favorite! I always love taking evening strolls along the Seine River near Notre Dame with my roommate Henna. The cathedral looks absolutely amazing lit up against the dark sky, and even with people around, it becomes such a peaceful area at night.

GC: Were you familiar with the French language before you arrived? If not, how did you overcome the language barrier?

KM: I didn’t know any French before coming to Paris, which was a major concern of mine. Fortunately, a lot of Parisians here know enough English that I can communicate with very few problems. To also ease the barrier, I am taking French classes at PAA, so my classes, along with being immersed in the language have taught me a lot very quickly.

With that in mind I now speak French before resorting to “Parlez-vous Anglais?” (Do you speak English?) My goal is to continue learning and speaking French, even when my time in France is over.

GC: How did Paris American Academy guide you in your major of fashion merchandising and design?

KM: At PAA, I am given the opportunity to learn the couture side of fashion design, which is very different than the ready-to-wear techniques taught at CMU. My classes are really small, so there is a lot of individual attention from teachers. This has been particularly helpful while learning all of the special stitches that are sewn by hand.

The teachers at Paris American Academy are all very knowledgeable and passionate about their specific areas of fashion design. Although I am only getting one semester of couture classes, I feel like I will leave Paris with a lot of new skills to apply to my future career in the fashion industry.

GC: Did you make any new friends while studying abroad? How did they effect your experience for the better?

KM: Henna and I were assigned as roommates since we are both attending PAA. Henna is an American student from Dallas, Texas who is participating in the 3-year program at PAA. We quickly bonded over being in the same situation as foreigners in France.

From the beginning we were doing everything together from just running errands, to stumbling into a random French electronic music parade (yes, that happened). She is a very lively and overall a fun person to be around, and having her as a roommate has helped me get through the few hard days that I’ve had here, especially the recent tragic events.

GC: What advice do you have to those who are interested in studying abroad?

Do it! If you have even the slightest interest, ask for information from the study abroad office. It is an amazing opportunity to see different parts of the world, experience different cultures, meet tons of new people, and learn a lot about yourself along the way. There is something for everybody to gain through a study abroad experience.