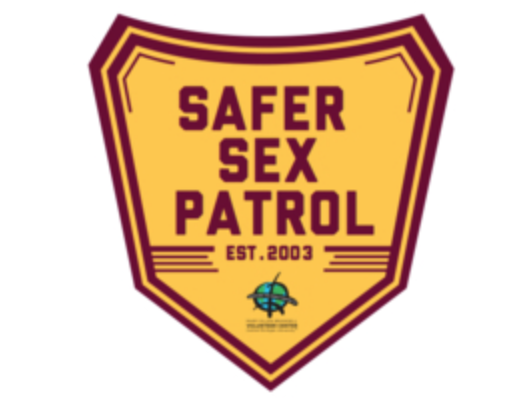 Safer Sex Patrol is a Mary Ellen Brandell Volunteer Center program dedicated to educating the campus and community about safer sex through bar patrols, kit stuffings and other educational programs and campus outreach.

In an effort to make the program more inclusive, Safer Sex Patrol will start handing out dental dams and female condoms at educational programs and bar patrols next semester.

“Last semester, my co-coordinator – he graduated – and I changed a lot of things in the program because we wanted to be doing more with the knowledge that we have and we wanted to become more inclusive,”  CMU senior and Safer Sex Patrol Student Coordinator Emma Harrington said.

Opening Up the Conversation
At each program the group hosts, they do demonstrations on male condoms, female condoms and dental dams.

“That’s a huge change that we implemented last semester and a lot of people have been really receptive of that because a lot of people don’t know about female condoms or dental dams and I think that’s very important. That’s something we’re still working on,” she said.

Safer Sex Patrol hosts presentations on different issues related to safer sex, such as abstinence and sexually transmitted infection testing. The group will also do programs for any other groups who are interested, such as residence halls, registered student organizations and Greek organizations. These programs can be tailored to the specific group’s interests.

Informing Students for Healthy Sexual Expression
Safer Sex Patrol also hosts bar patrols, where SSP facilitators and volunteers go to bars in the community and hand out abstinence candies – Now and Laters wrapped in information about abstinence – and condoms wrapped in information about consent, how to put on a condom and where to get tested for STIs.

“With the information and the tools that we give people, such as condoms and abstinence candies, hopefully we educate them and decrease the number of transmissions of STIs in the CMU community,” Harrington said.

According to the Centers for Disease Control and Prevention, though people ages 15-24 make up 25 percent of the sexually active population, they account for 50 percent of all new STIs.

Harrington thinks many students come to college with little knowledge about safe sex and how to protect themselves. Many people have heard incorrect information about STIs or haven’t gotten enough information, she said. Though learning and talking about sex might be uncomfortable, Harrington think it’s very important.

“Sex, safer sex, sexuality – it’s such a taboo subject. It’s definitely something that’s not talked about enough and I will always say that, no matter how many people I reach with the program because it’s a part of life. It should be talked about,” she said. “People should be able to have the knowledge and tools to protect themselves and make informed decisions.”

Safer Sex Patrol will have its last bar patrol of the semester this Thursday at 9:30 p.m. in the Bovee University Center Mackinaw Room.