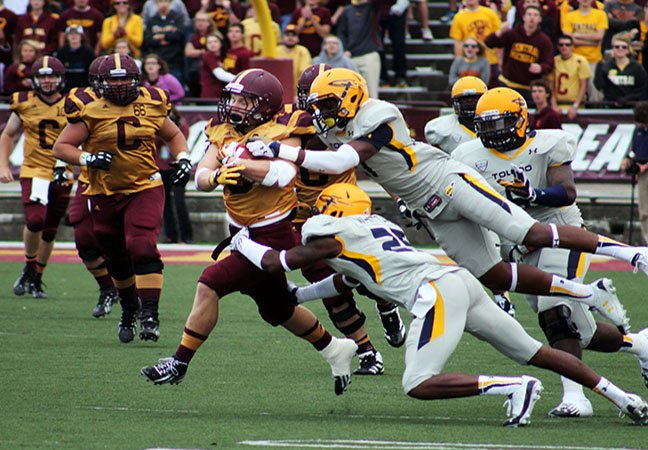 The minute Zurlon Tipton went down against the Michigan Wolverines in the first game of the season, Saylor Lavallii stepped in and stepped up for the Central Michigan Chippewas. Lavallii did more of the same against the Toledo Rockets on Saturday, setting his career-high in rushing yards in a 38-17 loss at Kelly/Shorts Stadium.

The sophomore running back ran with ferocity against Toledo (2-2), carrying the ball 24 times for 144 yards rushing and a touchdown. But Lavallii wasn’t concerned with those numbers after the game, as his performance wasn’t enough to propel Central (1-3) to its second victory of the season.

“I think as a team, as I said earlier, we ran the ball well today,” Lavallii said. “I’m not really sure about all the individual stats and stuff but we just gotta win ball games. I’d rather get a W than a career-high any day.”

Despite Lavallii’s lack of interest in the numbers and head coach Dan Enos‘ assertion that “stats are for losers”, one look at his numbers make two things clear; Lavallii is not the problem and he should continue to be the focal point of the Chippewas’ offense.

Lavalli has ran the ball 73 times through the first four games, accumulating 354 yards rushing and three touchdowns. Giving him 20-to-25 carries a game, as Enos has over the last three contests, is the only strategy that will allow Central to compete in the MAC.

For those of you who didn’t watch the contest in its entirety or at all, the game wasn’t the blowout the final score indicates. The Chippewas were trailing the Rockets 24-17 entering the fourth quarter, and it was only that close because Lavallii helped Central’s offense move the ball and control the clock through the first three quarters.

Unfortunately Central turned the ball over four times, two coming via Cooper Rush interceptions, and the Chippewas’ strong day on the ground was wasted. As Enos said in the post game press conference, Rush is a redshirt freshman and against the Rockets, he made freshman mistakes.

That is something Enos and company can expect to happen again and more than once this season.  Leaning on Lavallii and the running game will take pressure off Rush and open things up for junior wide receiver Titus Davis, when Rush does drop back to pass.

Throw in the fact that Central Michigan’s defense couldn’t stop Toledo from gashing them for 252 yards rushing, and Enos has even more incentive to let Lavallii tote the rock with impunity. By highlighting the running game and Lavallii specifically, Enos can protect both his inexperienced quarterback and sometimes vulnerable defense, while keeping the ball in one of his best playmakers’ hands.