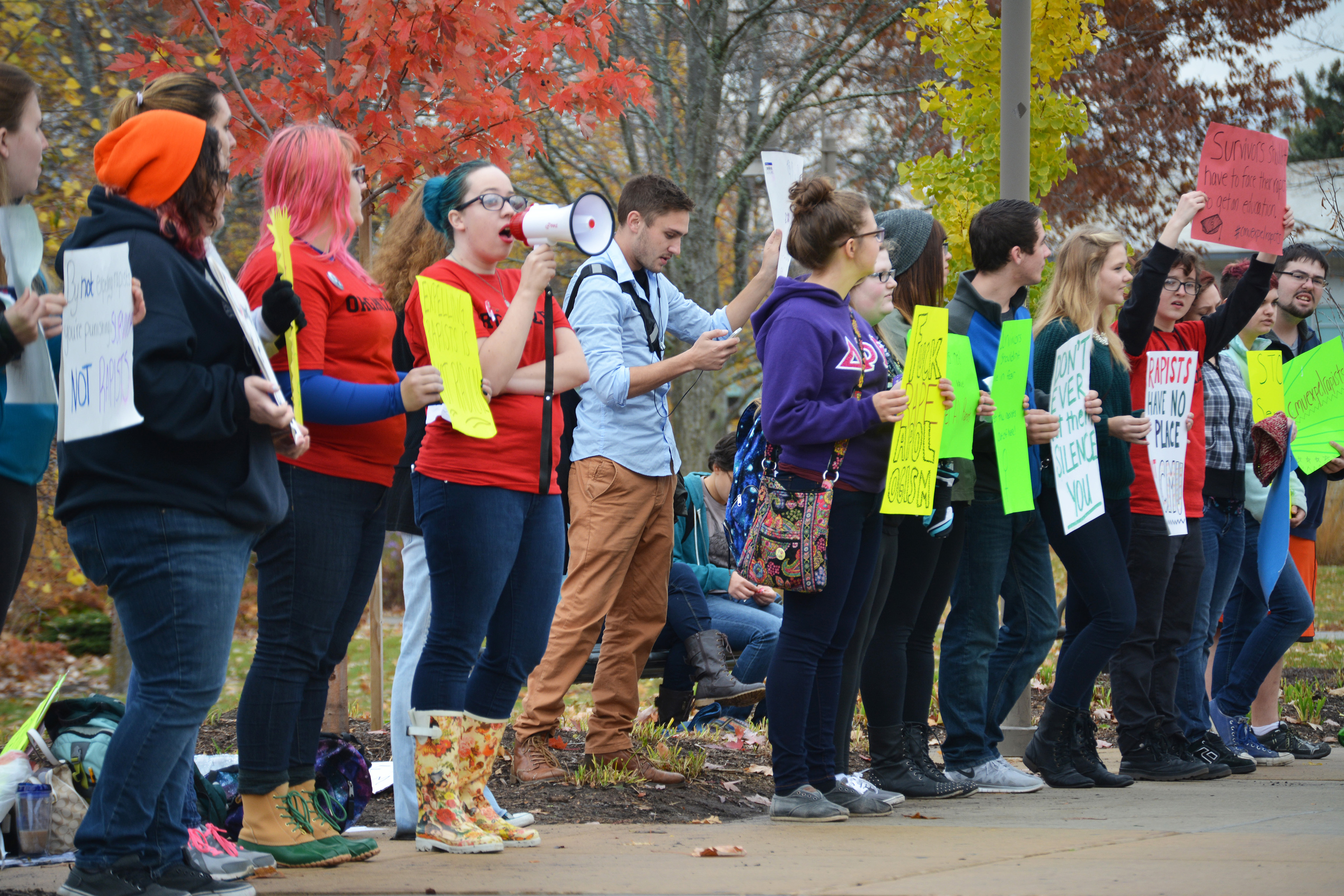 “Survivors are at CMU! The rapists shouldn’t be here, too,” and “We pay 20k a year! We shouldn’t have to live in fear,” were two of the many phrases the protesters shouted.

The Students Advocating Gender Equality (SAGE) are asking a policy change in the Code of Student Rights, Responsibilities and Disciplinary Procedures that will make expulsion the minimum sanction for convicted rapists. The protest began at 10 a.m. and about 30 people showed up for the march at 1 p.m., while others came and went to pick up flyers. One of the messages on the flyers said, “At CMU, you could be expelled for plagiarism, but you might not be for rape.”

SAGE President and senior Hannah Mollett said she was happy with the turnout.

“We have a lot of people that care about the issue and we’re loud and we hope that we’ll make an impact on the administration,” Mollett said.

Royal Oak junior and SAGE member Kai Niezgoda said they think expulsion is a change that the university must pursue.

“When it comes to campus security, SAGE holds the belief that victims should be a priority, because sexual assault isn’t just hurting them physically, but also emotionally and mentally,” Niezgoda said. “Year after year, we’ve heard stories of survivors who had to go to class with people who assaulted them. It’s not conclusive to student learning.”

When the protesters arrived at Warriner, Mollett read a letter addressing President George Ross and university administrators, which SAGE had composed as a group, stating that suspending students convicted for sexual conduct violations puts the survivors and all other CMU students at risk.

Mollett said SAGE was supposed to give the letter to Ross on Monday, but he wasn’t in his office even though the group was told he was going to be there all day. On Thursday they have an appointment to meet with the president and deliver it.

CMU graduate and union organizer for the Graduate Student Union Whitney Dziurka said she showed up in solidarity and that she thinks it’s surprising that CMU hasn’t thought about the issue before.

“We need to have an open dialogue (about rape) without fear of retraction. Protesting is another way of creating that dialogue,” Dziurka said.

Mollett said she hopes this will make people realize what kind of impact they can have as activists. Once they’ve fulfilled this main item on their agenda – expulsion for rapists – she said SAGE will focus on preventative methods against rape.

In addition to the protest and the letter, Mollett said SAGE started a petition on Oct. 23, which has so far gained more than 6,700 signatures.

Student Government Association Senator Brynn McDonnell said when people discuss rape prevention, they talk how to go about it from the survivor’s perspective. The question she wants people to ask is, “How do we stop people from assaulting?” She said they need to ensure that perpetrators understand the consequences of their actions and what sexual assault does to the victim.

“We live in a culture that’s waking up to sexual assault and domestic violence,” McDonnell said. “I’m not saying we haven’t talked about it before, but now is the time when we’re taking action and saying we’re not going to take this anymore.”