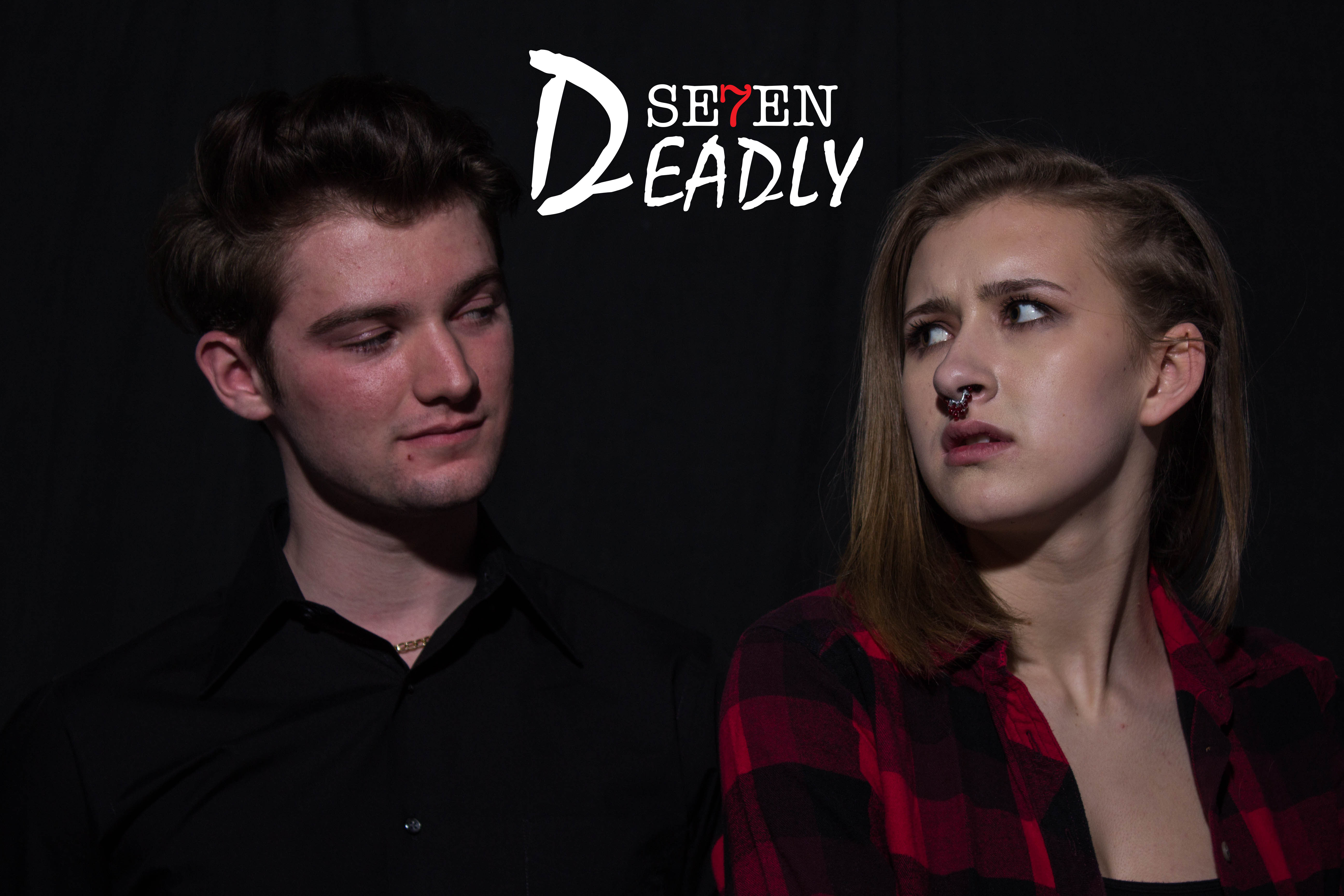 “Peyton rushes outside, trying to get Evelyn to talk to her. The party is still going on in the house.

‘Evelyn… Evelyn! Slow down!’ Peyton calls out after her.

Evelyn whips around, stopping Peyton dead in her tracks. They are both standing on the front porch.

‘Stay away from me!’ Evelyn yells.

‘What is your problem?’ Peyton asks. ‘You’ve had an attitude all night!’

Evelyn turns her back to Peyton and tries to type something on her phone.

‘Just go back to your party,’ Evelyn waves Peyton away, still not looking at her.

‘Are you jealous or something?’ Peyton asks, clearly frustrated.

Evelyn finally turns around with fire in her eyes and an incredulous look on her face.

‘More like disgusted,’ she says. ‘You’ve been thinking about yourself all night!’

Evelyn closes her eye and takes a deep breath. She starts to get in Peyton’s face.

‘That doesn’t mean you get to go around being a self-absorbed inconsiderate brat!’

A gunshot rings out into the night and the two of them whip their heads toward the house. Both of them terrified.”

Each episode of “Seven Deadly” season one surrounds a single incident that connects all of the main characters. Each episode is from the viewpoint of a different character. There is drama, violence, romance, and betrayal surrounding these characters and all of them represent one of the “seven deadly sins.”

The series itself is the first of its kind for CMU and MHTV. It is a student-spawned series, made up of five episodes, written and created by Rochester Hills alumna Monjoa Likine. The first season is currently airing on MHTV’s channel and on Vimeo.

“Writing season one of the show was a very personal experience for me. Many of the plots incorporated in the story came from familiarity. Whether they were circumstances I dealt with directly or experienced through the recollection of others, it was a beautiful process turning the aggregations of my consciousness into a story centered on betrayal, morality, and perception. It was the first project I had ever written with the intent to produce and it gave me insight to what an actual career in writing would be like,” Likine said.

Fenton senior and Director Nick Forbush originally joined the show in July as a producer, but he eventually filled the shoes of director of “Seven Deadly.”

“I was approached by the creator of the show, Monjoa, who’s just a visionary. She got ahold of me needing help with the crew and filling spots,” Forbush said. “I really am just captivated by film and by storytelling in general. And when Monjoa came to me with this story I was really interested.”

Forbush was used to producing news, but he wanted to try something different.

Filming began in September 2017. The first episode was filmed within three weeks. The crew shot for four months to get five half-hour episodes.

The first two episodes of the series were difficult for the crew. Forbush described those episodes as rough, but he explains that the third episode was a turning point in the show and for the crew.

Actor and crewmember Jackson freshman Enrique Fonseca joined the “Seven Deadly” team as a shot list keeper and to learn the ways of a full-scale production. After changes in the cast were made Fonseca eventually took on the role of the drug dealer in the series on top of helping in as many areas as possible.

“When I was there the first day [of shooting] it was really nerve wracking. There were a lot of people there and I didn’t know what I was getting myself into. After becoming a character I had gotten to become more comfortable with the crew and cast and it was an easy transition to do both,” Fonseca said.

Although Fonseca had never acted in anything other than his own productions he was glad he stuck with the show.

“This was a big step,” Fonseca said.

Putting on a full-scale production was a huge commitment for many students. Long hours, late nights, and multiple days a week was often required of the cast and crew.

When asked about a meaningful moment while filming the show, Forbush said directing episode two of season one was one of many for him. They were working in a 15×15 bedroom with no ventilation for close to eight hours filming one of the most intense scenes of the show.

“It was the longest shoot in Seven Deadly history,” he said. Despite it being a long, hot filming session, no one complained. Instead, everyone had the goal of finishing the shoot in mind and went for it. Forbush said it taught him how collaborative the film industry is.

Season one officially wrapped at the beginning of February and filming for season two began in mid February. Season two moves from an episodic series to a film adaption.

Forbush and Likine wrote the script for “Seven Deadly” season two in about five days along with the help of junior Leah Robinson, executive producer of season two, and junior Tim Geib.

“My greatest hope is that the people working on the show create something that exceeds their expectations. Passion is the only thing that can bring out the essence of a story and just from knowing most of the cast and crew, I know that passion is something everyone contributes. I hope the cast and crew find something similar to what I found during my time working on the show. I hope they grow, discover their talents, and continue to develop the show so others can continue after them,” Likine said.

The second season, or “Seven Deadly” film, allowed for new filming strategies including using the Kiva Theater in Moore Hall where they used different lighting, sound, and video techniques. They were able to use a six-foot slider, which “builds up cinematically and looks really pleasing to the eye,” Forbush said.

Filming has improved; they no longer use tripods, only Glidecam stable rigs and sliders. The camera and the crew are just as involved in telling the story as the actors, and that is demonstrated through the new ways of filming in episode three of season one.

Junior Andy Smilnak took the reigns as Cinematography Director in February. Smilnak said he heard about the show through someone in one of his classes: “she was talking about it and promoting it, and said they needed a crew… the way she described it to me was really exciting and really creative so I wanted to get involved with it.”

Smilnak said everything that he has been involved in and done this far has made him appreciate the behind the scenes production. He learned how much work and planning really goes on behind the scenes.

“And it’s not just one person,” Smilnak said, “The dragon has multiple heads.”

Season two of the “Seven Deadly” film adaption will be released in May.

For students looking to get involved in film production or broadcasting and cinematic arts, Smilnak said working for a production like this is “an invaluable experience.” Being a BCA major requires a lot of hands-on experience.

Forbush says “Seven Deadly” is “a growing entity” and they are always looking for more people. Collaboration like marketing and future openings also needs to be filled.

Anyone looking to get involved should contact Moore Hall Television at 989-774-3851 or get in touch with Forbush at forbu1np@cmich.edu.

If you want to keep up with the show, cast and crew, or just support you can follow the “Seven Deadly” Instagram here.