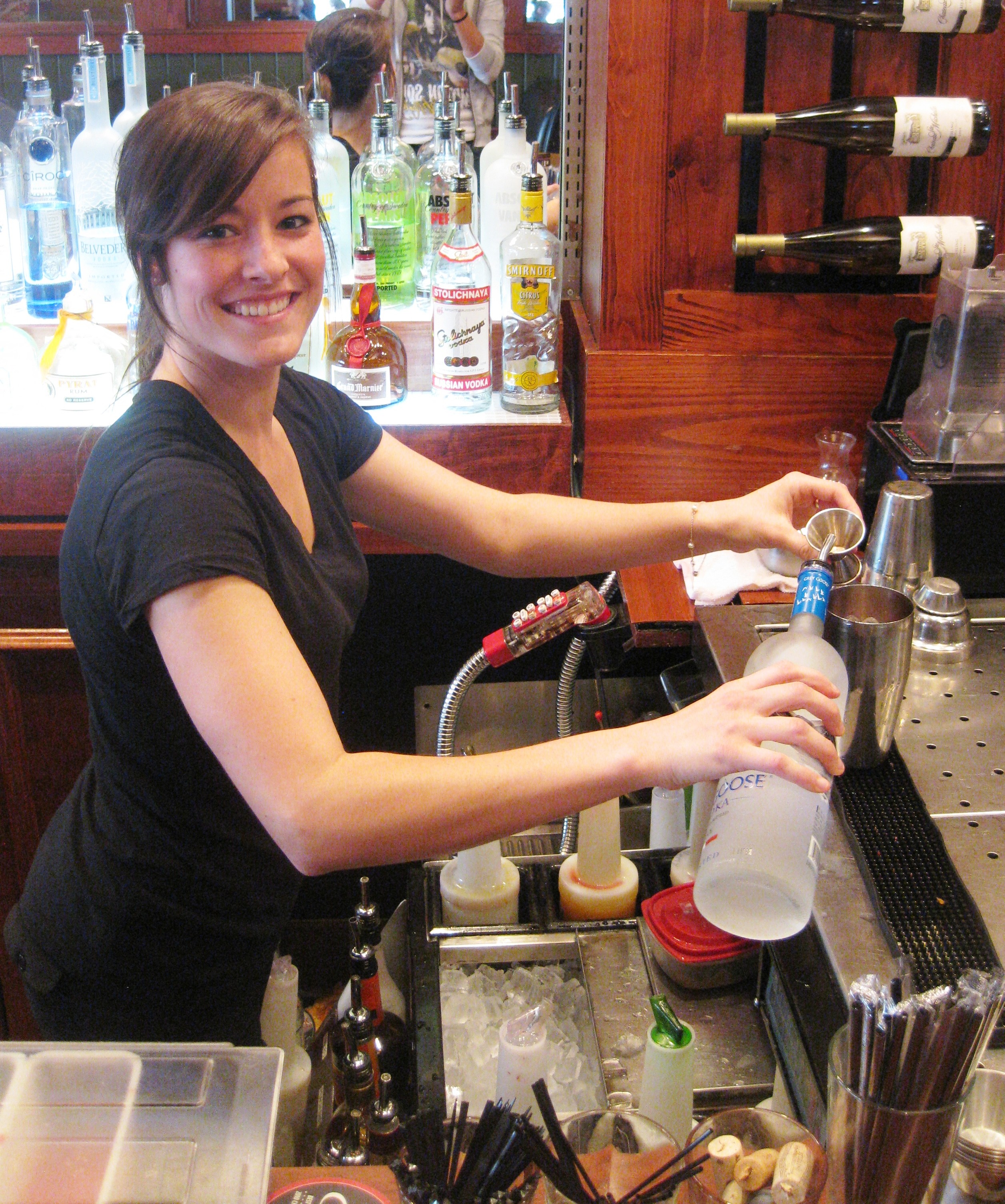 A mellow blend of Smirnoff Vodka, Malibu Coconut Rum, DeKuyper Peachtree Schnapps, pineapple and cranberry juice is what she pours (with a fresh orange peel) into her two bubbly female customers’ glasses. Ruby Relaxer is the name of the concoction, and it is Ruby Tuesday’s signature drink.

She grins, her smile spreading ear to ear, as she leans over from behind the bar to make a joke to the two ladies she’s been mixing drinks up for for over an hour now. The two women burst out laughing and she smiles, picking up their 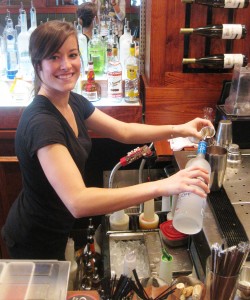 Jessie Williams is a lively, talkative waitress and bartender, who has been working at Ruby Tuesday for about two years now.

Williams is a sophomore majoring in broadcasting at CMU and a part of the CMU dance team, but she still finds time to work in the bar at Ruby Tuesday a couple nights a week.

She’s been working in the restaurant business since she was sixteen. Williams’ likes to interact and get to know her customers, which is the reason why she enjoys working in a restaurant setting.

“Jessie has a great personality when it comes to relating with guests,” Kasey Wiltzer, the guest service coordinator at Ruby Tuesday said about Jessie. “She makes our customers feel at home.”

Williams and Wiltzer have a close bond, like many other employees at Ruby Tuesday. Being a part of this restaurant is like being part of a big family.

Only a mere month ago was Williams promoted from waitress to bartender. Her responsibilities changed and the bar gives her more of a challenge. Williams went from being in charge of only her section in the dining room, to being in charge of the entire bar area.

Tonight is no different than any other weeknight in the bar at Ruby Tuesday.

She waits on the few tables and booths that are scattered throughout the bar area. Along with making drinks for not only the people at the bar, it’s her responsibility to make the drinks for the whole restaurant. Another responsibility for Williams is that she has knowledge about what alcoholic beverages pair well with different foods.

Williams has her regulars, a group of elderly men that come in to sit, drink, and flirt with her at the bar along with the other female waitresses that are working.

A man sits by himself at one of her tables, relaxing, reading the newspaper and sipping on a glass of red wine that Williams had poured him a few minutes before.

Williams greets an elderly couple who came in for dinner for their 50th wedding anniversary. The woman orders a Ruby Relaxer, which seems to be the popular drink of the night.

Williams’ energy never stops. She’s either behind the bar making drinks, waiting on her patrons in the bar area, or having five different conversations at once with her different guests.

Williams makes sure her guests throughout the night know about Ruby Tuesday’s new drink menu. She offers her new favorite drink, Skinny Pink Lemonade, to some of her customers at the bar who stare in awe at how fast her hands move while she mixes up their drinks.

A younger business woman, sitting at the end of the bar, decides she’ll have a Skinny Pink Lemonade. Williams mixes together pomegranate juice, agave nectar, Veev Acai Spirit, and Minute Maid Light in a matter of seconds.

At the end of the night it’s Williams’ job to put all the juices away, mop, and wipe down everything in the bar area including liquor and wine bottles. She is required to do a line check, which is making sure beer temperatures are where they’re supposed to be, and then everything is dated and stocked behind the bar.

Williams sits at the end of the bar counting her tips and laughing with her manager about a story a guest told her earlier in the night.

“What I love most about working in the bar is the stories I hear from my customers” Williams says smiling. “They tell me about their days, their struggles, their joys, and I love it. I could talk all night to some of my customers.”