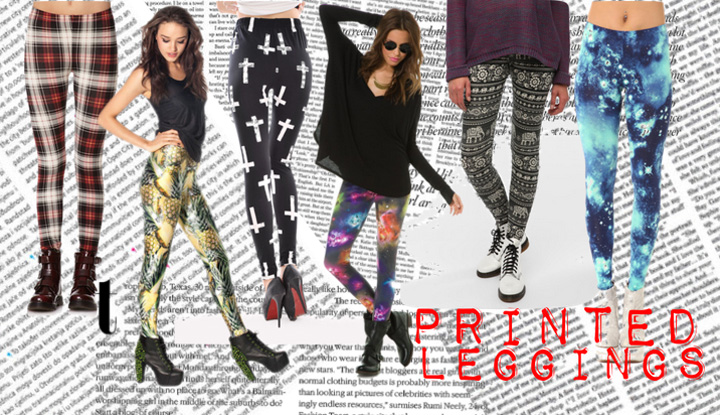 Whether leggings are appropriate to wear as pants or not has been debated in the past, but recently many students seem to have disregarded that argument. Girls on campus can be seen wearing leggings as a part of their everyday fashion, whether the color is typical black or a printed pattern.

Patterned leggings seem to be a fashion trend among many girls, but not everyone is raving about them. When asked about patterned leggings, this is what students had to say:

“They add to an outfit to make it more exciting and interesting,” sophomore Amanda Cebelak said. “They shouldn’t be see through but if they are, be sure to cover your butt.”

Katie Woodruff isn’t one to sport the trend but said she doesn’t mind them on other people.

“They look good on other people,” the junior said. “People I know who are pretty fashion forward wear them so they must be in, just not really my thing.”

“Some people can pull them off,” he said. “But I don’t like them for most people.”

While girls like to make a fashion statement with printed leggings, sophomore Connor Wickham, doesn’t think that’s the greatest idea.

“Some are pretty, but some look like girls have tattoos,” he said. “Ones that are ridiculous colors are too much but neutral colors are okay.”

Sophomore Jesse Drier agreed and said not all prints are eye-catching.

“Some are ridiculous,” he said. “But it really just depends.”

There are some rules that should be followed regarding this trend, senior Jade Stansbury said.

“I like printed leggings but you have to know the rules before you attempt to wear them,” she said. “A crazy print on your butt/hips will make you look bigger so I wouldn’t wear them unless I had on a long, solid colored shirt. Even then, I would proceed with caution.”