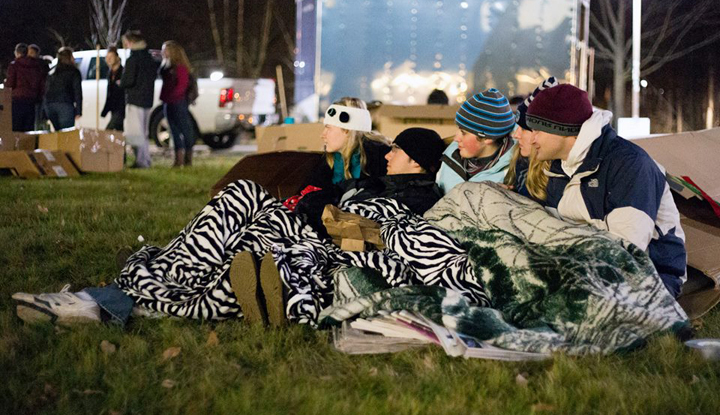 Groups of boxes were scattered across the Park Library lawn Wednesday night amidst the darkness and chilly air. Students in teams of three to seven people brought a cardboard box, which was attached to other members’ boxes to make one small shelter for the group to sleep in for the night.

Cardboard City, part of Hunger and Homelessness Week put on by the Mary Ellen Brandell Volunteer Center, was created to make students aware of the difficulties that the homeless face.

According to the United States Census Bureau, 31.4 percent of the people in Isabella Countybetween 2007 and 2011 lived below the poverty level.

“It’s a great experience to know how cold it gets and how much you have to deal with,” sophomore Jordan Moore said.

To participate in Cardboard City, students met outside the Park Library to assemble their cardboard home for the night. From there, a candlelight vigil honored those who have been homeless.

“We had the candlelight vigil to talk about homelessness and make sure everyone is understanding what we’re doing this for so it’s not just sleeping outside,” Moore said.

The event is more than spending a night outside, it’s about spreading awareness.

USA Today published an article with data collected by the United States Census Bureau, the United States Department of Housing and Development, Bureau of Labor Statistics and National Association of State Budget Officers showing more than 600,000 people in 2012 who were homeless, making the importance of Hunger and Homelessness Week something to think about.

With temperatures dropping below freezing, it was a glimpse into what it is truly like to be homeless.

The trick to staying warm?

“Lots of cuddling,” sophomore Nick Martin said. “We have seven of us sleeping in our box.”

The boxes become damp, cold and soggy over the course of the night and some students leave as temperatures quickly drop. Those with strong wills and warm shelters tough through the wet and cold to show some respect for those without homes.