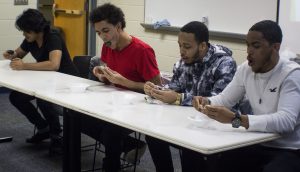 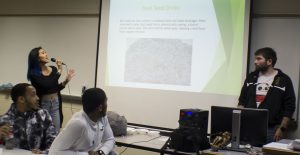 Cultural Café
Cultural Café was Thursday, March 23 in the Herrig classrooms. A variety of Asian food was offered, from Hotteokto Chinese pork dumplings. The classrooms were transformed into a small café, with lanterns adorning the tables and Korean pop music playing in the background. ACO members collected orders and delivered food to students. 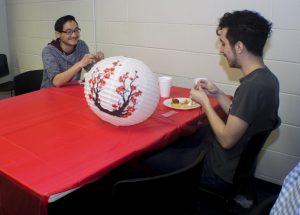 “Showing [culture] is very important. It’s important to equally represent as many cultures as possible,” Sophomore Sarah Rivers said. Rivers was a leader in organizing Cultural Café, one event during APAHM.

Around 50 students attended throughout the afternoon to try new foods. One crowd favorite was Hotteok, a Vietnamese pancake. Boba tea with tapioca bubbles was also enjoyed by many.

“It’s a good way to try new foods and learn about different cultures in terms of their food,” White says. “Since being introduced to different foods at a previous Cultural Café, I go to a variety ofrestaurants, it’s a way to spice up your food life.”

All of the food available at Cultural Café is homemade so ACO members were hard at work the day before cooking the dishes. One member, senior Ping Los, contributed greatly to preparation of Cultural Café with his knowledge and talent of cooking.

“Ping is the chef of ACO. He makes sure to help us with his culinary talents whenever we need him,” Rivers said. 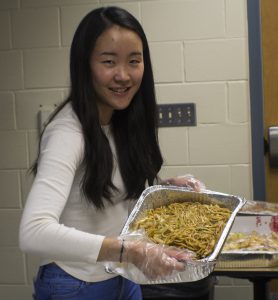 Night Market
“Night Market is a place for everyone to come together and enjoy the same atmosphere” junior Tyler Hironaka said.

On Tuesday, March 28, ACO hosted Night Market, an event inspired by real Night Market and festivals in Asia. Located in Kulhavi, games were set up all around the room. Participants were required to win at least four games before being presented with a prize, a buffet style sampling of food from Dragon Express. Games entertained and educated, such as with the game, Heads Up, based on the popular app. During the game, one student would attempt  to describe cards with Asian countries or words relating to Asian culture to the other for the second to guess.

Sophomore Hannah Mauch loved playing Heads Up with her friends.

“It’s really fun and there is a lot of opportunity to learn trivia and other facts.” Mauch said.

Another game at Night Market called Poi challenged students to catch a live fish with a rice paper net. If students were able to successfully catch a fish, they were allowed to take it home.

Night Market had a strong turnout throughout the evening, with at least 60-70 students attending.

The Reason for the Season
APAHM may be simply games and free food for some, but for many ACO members, it is a meaningful time of the school year. According to the Office of the Provost, in the Fall 2016 semester, 407 students enrolled identify as Asian/Pacific Islander in addition to 1,057 international students whose largest majority come from India and China.

ACO has become a welcoming environment to many, to make friends and connect.

“I found it to be a destiny that I would make myself a part of an organization that I identify with.” Le, who joined at the end of the fall semester, said.

Senior Ginny Agee has been a part of the organization since her freshman semester, five years ago.

“I saw an advertisement for it on a whiteboard and I showed up, made friends, and have been here ever since.” Agee said.

In addition to organizing APAHM, the Asian Cultural Organization hosts other events throughout the year such as Cosplay Café, a joint effort with the Central Cosplay Club.

As well as educating Central on Asian culture, it is important to ACO to raise awareness about Asian/Pacific American social issues as well.

For Los, one important injustice facing the APIA community to be aware of is the model minority myth.

“The model minority myth– it categories all Asians under one umbrella. Assumes we are all academically talented equally and do not struggle in school. Different people have different talents and needs. It’s completely unfair to assume and puts negative pressure on many Asian Americans.” Los says.
From Cultural Cafe to Night Market, there is plenty to see during the Asian Pacific American Heritage Month. Fun filled events entertain and educate the CMU community.