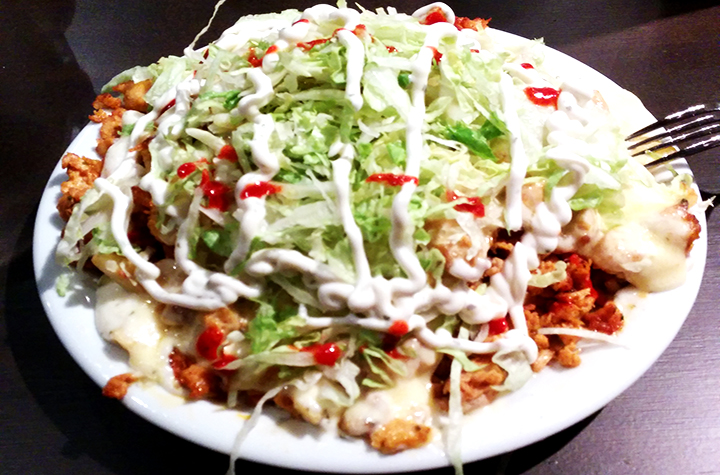 Sometimes a culture’s food is not what its people have eaten for generations. It’s not what great-grandmothers have passed down in age-worn family cookbooks, recipes as old as the ancient European villages and the churches those villages were built around.

Sometimes a culture’s food is what students like to eat when they’re drunk or when they don’t care about being healthy. This is Kapsalon. It’s a Dutch junk food with fries, meat, melted cheese, greens (shredded lettuce, sometimes cucumbers) topped with garlic sauce and hot sauce. Eating the whole thing, unsurprisingly, gives a person close to an entire healthy day’s caloric intake. Dutch students do not care about this. Nor, for that matter, do any students, regardless of nationality. A Latvian friend introduced me to Kapsalon, and what followed was obsession.

Every day, in the early evening, a friend in my exchange group walked down the street from our hotel to a tiny, rundown shack that could have been a camper, called Snackbar Snoepy. Later, when I studied in Korea, I had a Danish friend who spent much of his childhood in Holland. I’d talk about Kapsalon and compare it to another junk food we ate in Korea.  He kept insisting that he’d never heard of Kapsalon. That was unbelievable to me, because it was everywhere. I remembered someone in the Netherlands, though, telling me the dish was relatively new.

She said a hairdresser invented the dish. Whether this was urban legend or truth, I don’t know, but it seemed credible: the name of the dish is Kapsalon, and the word in Dutch means, literally, “barbershop.” (That friend is now on exchange in Holland, and tells me he eats Kapsalon all the time. “I see now how you ate it every night,” he wrote me.)

The guy who ran Snackbar Snoepy soon got to know exactly what it was my classmate and I wanted. The language of the Netherlands is Dutch, and he was presumably a Turkish immigrant. The menu was in Dutch. His English was not good. Still, he understood “Kapsalon,” “big,” and “spicy,” and that was good enough. I later found out that what we paid for the dish and a drink, 11 euros, was much more than what we should have been paying. I’d heard more than once that we were being ripped off. Actually, I didn’t mind. We were tourists, and deserved to be fleeced.