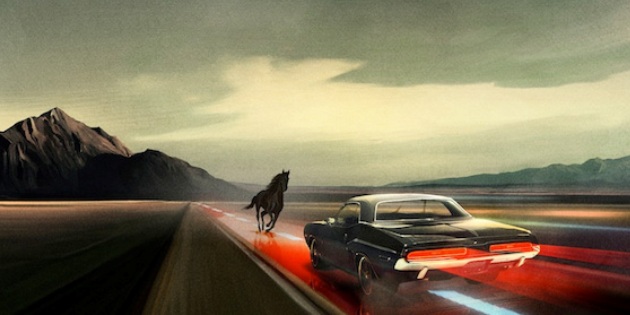 Every concert has them: the die-hard screaming every memorized lyric, the jumper exhausting everyone, the sweaty guy denouncing any form of deodorant, the couple that hasn’t flipped through the PDA guidebook in a while, and the metronome incessantly lifts heel and toe to the beat. All of these usual music-loving suspects were present for The Killers with Tegan and Sara at Eastern Michigan University’s Convocations Center for a sold out show Dec. 20.

The concert kicked off punctually with Canadian two-piece, Tegan and Sara. The indie rock duo played nine songs and closed with a single from their upcoming album, “Heartthrob,” the latest studio release since 2009’s “Sainthood.” The band played a strong set despite the illness of half of the vocal talent.

After an elongated break and a visit from a t-shirt gun and an entertaining drunken Santa, the crowd was reared and ready for the headlining act. Any break in the music from overhead speakers sparked premature cheering, clapping and picture snapping. Finally The Killers, an alt new wave rock four-piece, took the stage.

The crowd exploded upon hearing familiar chords from one of the band’s largest commercial successes, “Mr. Brightside.”

“Hello Ann Arbor, Detroit, Ypsilanti! I’m not sure what to call you! Michigan?” laughed The Killers front man, Brandon Flowers.

The primary song writer for the band, the emotion in Flowers’ voice was obvious as he belted original material with personal significance. The spotlight shone on bassist Mark Stoermer with multiple solos, a somewhat unique feature for a live show.

The Las Vegas natives played before a fantastic light and pyrotechnic show, the thought of which should make an epileptic wet his or her pants. A set of 15 songs spanning throughout the band’s four-album discography kept the crowd moving. Including the three-part encore, five songs of the set-list came from 2012’s “Battle Born.”

This marked the second sold out show for The Killers in Ypsilanti, they previously played the same venue in 2009. A mid-size arena with a concert capacity of about 7,500, the Convocations Center has been host to big names over the past decade including Jay-Z, Bob Segar, Kid Cudi and Deadmau5. Assistant Director Marcy Szabo said bringing music acts to campus is important to not only add another facet to education, but to give students a break from the stress of classroom antics.

A LiveNation concert, the Convocations Center was approached this summer with the opportunity to bring The Killers to Eastern’s campus. Since joining the university’s staff in 2004, Szabo said that every production has had its own rewards after hard work.

“There is always a moment usually is a pretty powerful part of the show where you look and take a deep breath and say ‘Whew, it’s all in, it’s happening and look at everyone having a good time,’” Szabo said. “It’s hard to explain but anyone who has ever produced an event knows that moment. It’s pretty amazing.”

As The Killers wrapped up the set confetti rained on hundreds of raised palms. The hardcore fan, the jumpers, the couple, the metronome and the event producer were all in this moment together. The bags of their clothes shaking to the beat of the same bass, mouthing the same lyrics that hold a different meaning in each member in the lineup of the usual music-loving suspects.