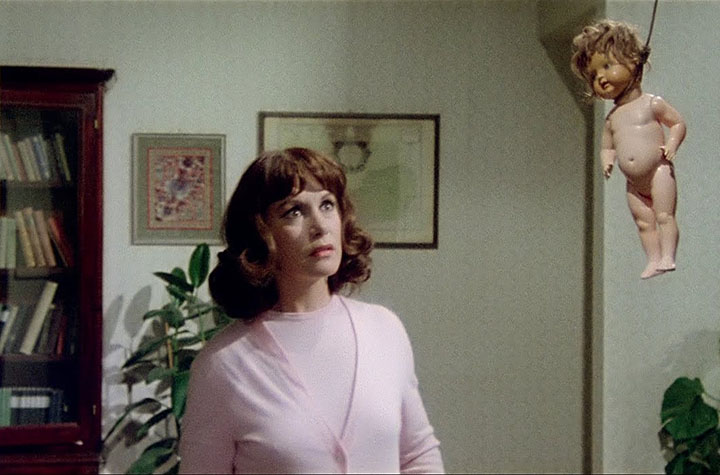 For the last portion of The October Horror Project, it feels appropriate to cover the films that seem to have taken reign over the horror market. Slasher movies have persisted through the decades with little variation: a killer stalks a group of young adults, and the results are typically gruesome. Yet, even with this well-established formula, these films are a lot of fun to watch on Halloween night and a few major and important classics have emerged from this sub-genre.

Inside (Julien Maury and Alexandre Bustillo, 2006)

The French have developed a strong voice in horror over the past decade, releasing some of the most extreme examples of the genre (so violent, in fact, that these films are often lumped together as the “New French Extremity” movement). “Inside” is the finest piece of horror to come out of this wave of films: a nefarious woman (played with wicked ferocity by Beatrice Dalle) shows up at the house of Sarah, a pregnant woman whose husband died in a car accident a few months prior, and informs her that she aims to take her child. The filmmakers consistently find new and exciting ways to further the suspense, while also taking the gore to unexplored heights of excess.

Bob Clark (“A Christmas Story”) made “Black Christmas” in 1974, and it is often pointed to as the very first of its kind. Everything that has become commonplace in slasher movies is here—the sorority house, the bloody murders and especially, the ominous (and, in this case, vulgar) phone calls to the house—though these components have never been so expertly deployed. The best part is that Clark’s masterpiece can be watched on Halloween and Christmas.

Not many people saw “Orphan,” Jaume Collet-Serra’s bizarro tale of a demented orphan moving in with an unsuspecting family, but the people who did will likely never forget it. The twist at the end is a disturbing (albeit absolutely bonkers) take on the “creepy child” movies that have overran the multiplexes. Its has an undeniable ability to sustain a chilling, sometimes comical, atmosphere. Fair warning, though: some of these images are really hard to shake.

Greg McLean doesn’t rush to violence like so many other directors making their way in the horror field. “Wolf Creek” is hardly scary for its first 45-or-so minutes, building toward a nightmarish climax that feels earned and, therefore, impossibly scary. Beginning as a road movie about three backpackers moving through the outback, the film eventually turns into pure Hell after their car breaks down and a seemingly friendly man offers them help.

Dario Argento’s pre-“Suspiria” masterwork is one of the most unsettling and flamboyant of the “giallo” slashers. The superb visual styling of the director complements this tale of a music teacher on the trail of a killer after witnessing the grisly murder of a psychic. Goblin’s unstoppable score also adds a hefty dose of funk to the proceedings. “Suspiria” may be the better known film, but “Deep Red” is every bit as accomplished and imaginative.

This is the second Christmas film to be featured on the list, but this is with good reason. The amount of slasher holiday film can be intimidating, and most of them remain of little interest. Not this sadly overlooked gem from 1980, in which a disturbed man, haunted by childhood memories of a Santa Clause (his father, in fact) making advances toward his mother, insists that he is Father Christmas and goes on a killing rampage to prove his point. The thing that sets this film apart (besides its oddly touching and strange ending) is in its shockingly sensitive treatment of mental illness.

No horror list could possibly be complete without Tobe Hooper’s seminal masterpiece. Even though most have seen this film (or, at the very least, heard of it, thanks to that awful remake), it is always a potent reminder of the sort of artistry that horror can amount to. It may be the closest cinema has come to capturing the feeling of a nightmare, and Hooper went to great lengths in ensuring the uncommon power of his film never diminishes.

That’s it! I hope everyone enjoyed reading through these capsules as much as I enjoyed writing them. Happy Halloween!