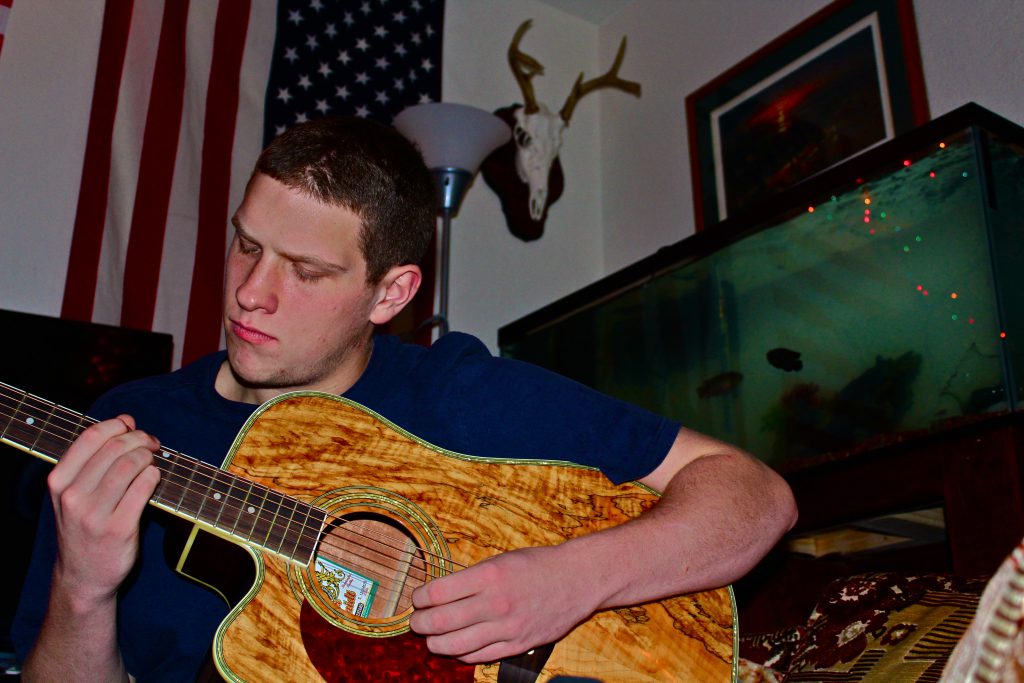 The busy and rigorous daily schedule of most college students leaves little time for hobbies, which includes playing music.

Junior Brandon “Beef” Blackmore has always made time for his passion, even during the busiest days of the school year. His passion for playing the guitar started at an early age and over time has been an outlet used to express himself and make lifelong friendships.

“My dad gave my brother and I guitars when we were younger, so it enabled me to play,” Blackmore said.

His brother Chase picked up on the instrument quickly and taught him the basics, which led to teaching himself. As a left-handed guitar player, he often had to find ways to play if his guitar wasn’t with him, like playing his brother’s right-handed guitar on family vacations in order to keep learning.

Incorporating His Influences
Blackmore’s musical influences come from the sounds of classic rock and hip hop, two genres that he loved from a young age.

Classic rock was a staple in his household growing up, he developed a deep admiration for Jimi Hendrix who was also a fellow lefty. Additionally, he discovered Eminem while looking through his older brothers CD collection when he was 10 years old, and was instantly drawn to his style because of his edgy and raw wordplay. These musical influences have helped Blackmore create his own sound and meet a variety of friends who listen or play similar styles of music.

Music Connects People
The first days of freshman year, Blackmore met some his closest friends, most notably his friend Lucas Hanson, who also played guitar. As a way to interact with fellow students, they began to play.

“We would go around to different halls and play for people, some friends and some strangers,” Blackmore said.

Playing in the hallways helped the two meet more musicians who were much alike. They would have jam sessions multiple times throughout the week, sometimes with new friends. It was a release from the overwhelming adjustment to the new world of college.

Whether he was rocking out with acoustic guitars or writing raps in a dorm room full of friends, he said that those moments are the ones that mean the most.

He shared what meeting these people has meant to him.

“I met my friend Lucas through the dorms, along with my friends Colin and Kyle, my roommate Dom introduced me to his friend Trevor who makes beats and that’s kind of how my musical friendships all started,” Blackmore said.

Cultivating His Passion in College
He reflected on how music has helped shape his college experience.

“The overall experience has been incredible, there are so many people that I have built great relationships with and will have lifelong friendships with because of music,” Blackmore said. “I have met a lot of people through classes and friends who make music as a hobby so it’s always great to share a similar passion.”

Blackmore even offered up advice for those who may not know how to get there music out there.

“Just get to know people and see what you have in common because that’s how you end up making real friends,” Blackmore said.

He finished with advice for anyone who may be interested in learning an instrument.

“Just do it. If you know someone who makes music or if you have an instrument you want to play, just start learning because it’s never too late.”

To hear his latest music, find Blackmore on Soundcloud.