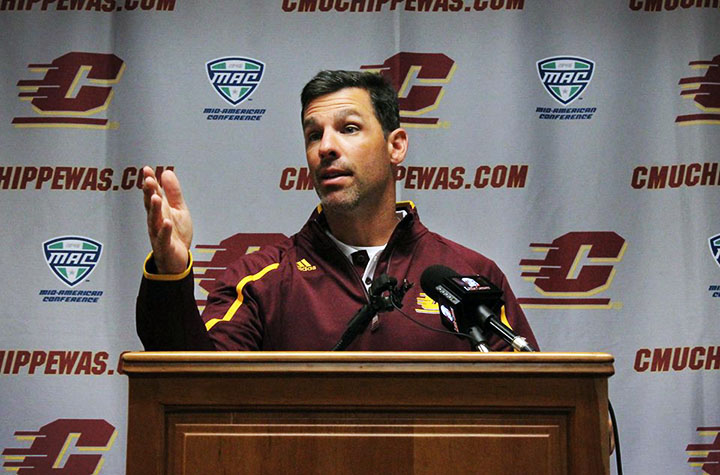 Time is starting to run out on the season for Central Michigan and coach Dan Enos.

Enos is 14 games under .500 during his tenure at Central Michigan (14-28) and despite that record, he signed an extension at the end of last season.

The same problems that have existed over the past four seasons under Enos are as prevalent as ever, and show no signs of going away.

Two of the most prominent problems have been ball security and poor special teams play.

Cooper Rush threw three interceptions in the loss against North Carolina State on Saturday (48-14). Two of those interceptions came when the game was out of reach in the fourth quarter but his first pass attempt of the day was intercepted and returned for a touchdown.

Rush’s pass was a slow slant over the middle that NC State linebacker D.J. Green saw coming from a mile away. Green took it untouched into the end zone for the first score of the day. Plays executed that slowly and carelessly would get intercepted by most high school linebackers.

On special teams, there was a missed field goal in the first quarter by Ron Coluzzi when Central Michigan was down just  7-0. Later on, NC State scored on a 67-yard punt return, capping off 21 points in four minutes.

Rush finished the game 16 of 37 on 165 yards with one touchdown and three interceptions. The statistic that stands out the most is the 4.5 yards per completion average. The passing game has no explosiveness to it—whether it’s been against an opponent from the MAC or ACC.

Since taking over the starting quarterback job on Sept. 14, Rush has seen his yards decrease every game and has not thrown for more touchdowns than interceptions since he first saw action on Sept. 7 against New Hampshire.

In Rush’s three starts, Central is 0-3 and he has thrown just three touchdowns to seven interceptions. The play-calling has been predictable and the execution has been nonexistent when it matters.

It needs to be noted however, that Rush received no meaningful support from the rushing attack on Saturday.

Saylor Lavallii couldn’t build off of his 144-yard day from Sept. 21 against Toledo; running 14 times for just 16 yards against NC State. For Central Michigan to get back on track, Lavallii will have to be more consistent in making plays and running behind the offensive line. When you can’t hit 20 yards on 14 carries, there is something seriously wrong.

For a team that won a bowl game last year, starting 1-4 and heading into the bulk of a three-game road trip is beyond disappointing.

It’s hard to aim the blame due to the amount of injuries that this team has been forced to deal with, but this is football and every team in the nation must deal with them. Something needs to spark some life into this once proud program because right now it seems to be in a tailspin.

On Saturday, Central plays Miami (Ohio) who is still winless on the season in four attempts.

If Central doesn’t win against one of the worst teams statistically in the nation, then how could anyone say that this program is headed in the right direction?

Rush and Enos are both in dire need of a turnaround.

For Enos, you have to start justifying that contract extension at the end of last season. In today’s day and age of college football—four seasons to build a program is equal to an eternity.

On the other hand, Rush can’t keep losing games and throwing interceptions at the rate he has been. Potential or not, you can’t idly sit back and wait for something to correct itself. Alex Niznak lost his chance at the starting job in one half against New Hampshire, Rush has gone 0-3 and regressed ever since his flash in the pan emergence.

After the trip to Miami (Ohio), the next two games are against Ohio University (3-1) and Northern Illinois (4-0). Northern Illinois is coming off a 55-24 win at Purdue for its second road win against a Big Ten opponent this season (the first came against Iowa).

The 2006-2009 era seems like light years ago. If the administration truly cares about this program they need to show it. Rewards should not be handed out, this is Division I football and you should only get rewarded for one thing: Winning.