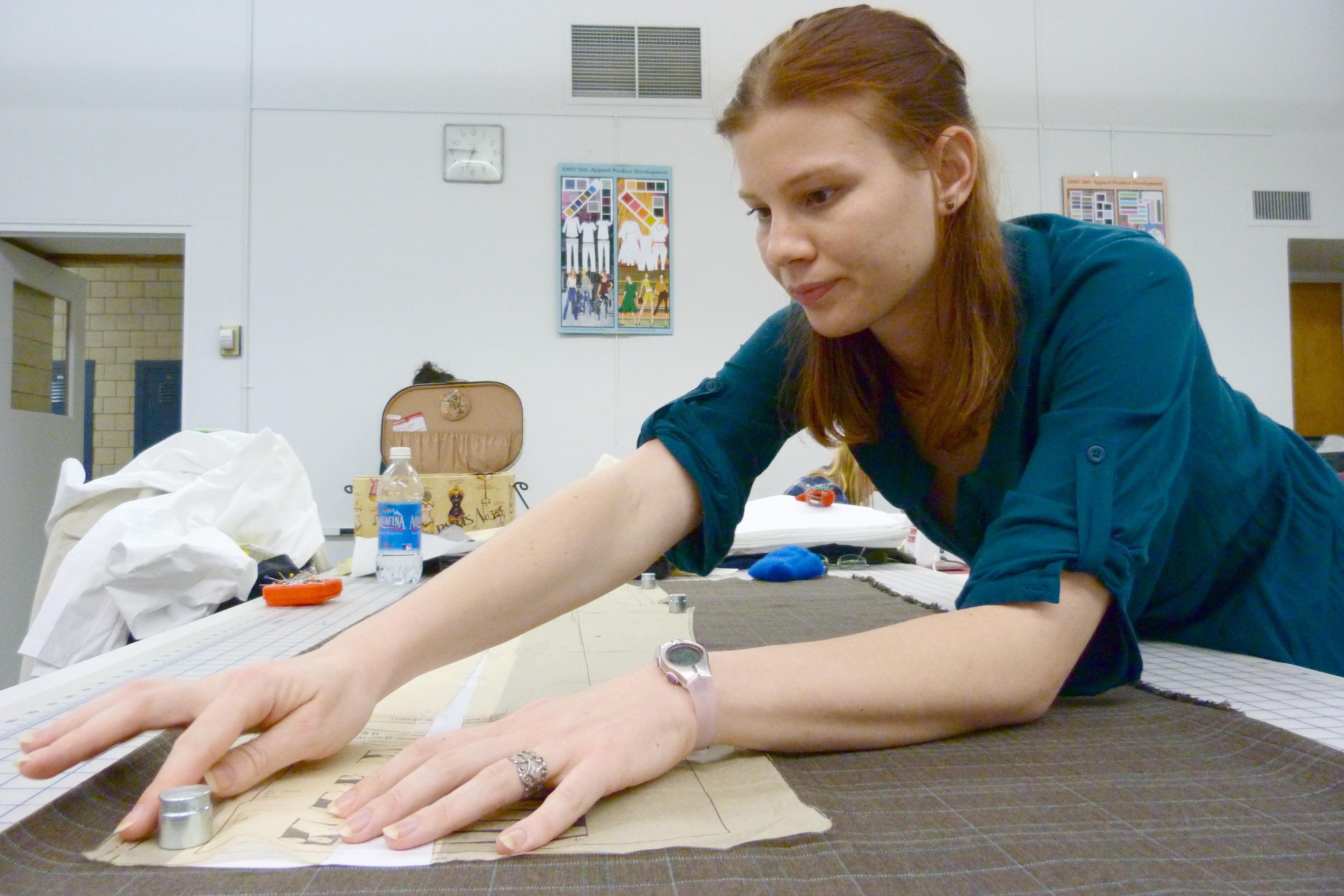 Being a second year designer, Carla Barrington, an apparel merchandising and design senior, knew what she was getting herself into with this year’s THREADS fashion show.

Barrington said designing this year was just as hard as the last, but being a veteran designer made her feel more prepared.

“I am definitely a lot more comfortable and confident patterning,” Barrington said.

Barrington is designing for the fall/winter portion of the show. She decided to do the fall because of the more muted colors and to add different styles and looks to round out her portfolio.

Barrington described her line as “city sheek workwear” and “classy,” which will consist of six looks including one men’s wear look; which she has never done before.

She had to alter one pattern for the men’s look because she didn’t have any men’s slopers, known as pattern cut outs of a sleeve, bodice and bottom that could be altered and sized to fit.

Barrington draped and flat patterned the rest of her line.  Her fabrics include cotton blends, wool and faux fur.

The colors she chose are blues, browns, greens and a dusty rose.

The five women’s looks are comprised of jacket and dress combinations.

“I did a lot of full skirts, and its very fifties inspired,” Barrington said. “The dresses are really structured and the jackets are really boxy, to make it a little bit different.”

Barrington not only did full circle skirts but also created pencils skirts for the collection.  She gets a lot of her inspiration from old school designers such as CoCo Chanel and Christian Dior.

“It has to be something I feel comfortable wearing,” Barrington said. “Which means it’s very modest.”

Barrington said that 90 percent of her fabric was purchased at Jo-Ann Fabrics and Crafts, 4208 E Bluegrass Road, while the other 10 percent is recycled fabric. Using recycled materials made it cheaper and more affordable as well as being helpful to the environment.

Her favorite whole look that she has made is a recycled dress that is paired with a faux fur dusty rose jacket.

“It was originally an extra large black sheath dress, a floral skirt and a hearing bone skirt,” Barrington said. “Essentially I cut them all apart and used the fabric.”

She really liked the style of the jacket which she said made up for the more complex dress underneath.

Barrington’s favorite single piece is a blue wool jacket that has asymmetrical lines and buttons. It was an idea she had for a long time, and it complimented other asymmetrical garments in her collection.

As a part of the show designers can submit their garments for judging and awards. Barrington hopes to win best construction because it is her strong suit but said there are a lot of really talented people in the show.

Her biggest expectation for the show this year is just to make it through and survive.