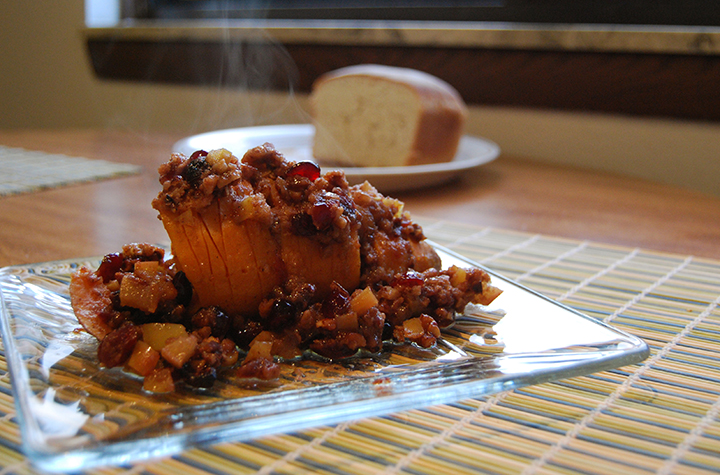 Thanksgiving can seem pretty predictable at times. From turkey to stuffing to green bean casserole and cranberry sauce from a can. So why not add a slight twist to the common Thanksgiving dishes this year?

One tablespoon of olive oil

One apple, cored and diced

One-half cup of shredded sharp, aged or smoked cheddar cheese or a dairy free cheese substitute (I like the GO Veggie! shredded cheeses)

Salt and pepper to taste

One tablespoon butter, melted or a vegan butter substitute

One tablespoon of maple syrup

1. Preheat the oven to 375 degrees Fahrenheit. Spray two rimmed baking sheets with olive oil mister or cooking spray and place the squash rings on the sheet.

2. Cook the quinoa in the vegetable broth according to the package instructions. Let it cool just slightly.

3. Heat olive oil in a medium skillet over medium heat and add the onion. Cook for about 10 minutes or until the onion starts turning brown. Next add the apple and cook for five more minutes until the apple has softened. Allow this to cool slightly as well.

4. Combine the quinoa, apple, and onion mixture with cheese cranberries, sage, and walnuts in a large bowl. Add salt and pepper to taste. Lastly, stir in the egg.

5. In a small bowl, combine butter and maple syrup. Brush the tops and insides of the squash rings with the butter mixture and season them with a little bit of salt and pepper.

6. Stuff your squash rings with quinoa. Fill the center and press down to fit as much stuffing as possible without it overflowing. Spray centers of the squash rings with the olive oil mister or cooking spray and bake for 30 to 40 minutes, or until the tops are golden brown and the squash is tender.

This recipe was taken from Oh My Veggies

Don’t forget to check out the recipe for Stuffing in Crock-pot from my previous article!

One and one teaspoon plus one-forth cup of olive oil

One tablespoon of fresh lemon juice

1. Preheat an oven to 350 degrees Fahrenheit.

2. In a small bowl, combine the pecans, one and one-half teaspoon of olive oil, one-forth teaspoon of salt, sugar and cayenne and stir to coat evenly.

3. Transfer the mixture to a baking sheet and toast in the oven until browned. This will take about 10 to 12 minutes. Let it cool.

4.  Shred the Brussels sprout and radicchio. This can be done with a grater attachment on a food processor or simply with a kitchen knife.

5. Transfer to a large bowl and stir to combine.

6. In a small bowl, whisk together vinegar, lemon juice, mustard and maple syrup. Slowly whisk in the one-forth cup of olive oil and season with salt and black pepper.

8. Top with pecans and serve immediately.

This recipe was adapted from Williams-Sonoma

Ingredients for the Crust:

One cup of oats or walnuts

One cup of raisins or dates

Ingredients for the Cheesecake:

One teaspoon of vanilla extract

One sugar pumpkin (about six cups) peeled, deseeded, and cubed

Instructions for the crust:

1. Pulse the oats or nuts in a food processor until they become crumbs.

2. Add in the raisins or dates and process again until it all sticks together.

3. Press into the bottom of a lined spring form pan and set in the fridge.

Instructions for the cheesecake:

1. Blend all the ingredients together in a blender until thick and smooth and then spread evenly into the spring form pan on top of the crust.

3. Slice and serve with a hot chocolate or caramel sauce and maybe even some ice cream!

This recipe was taken from Skinny Limits