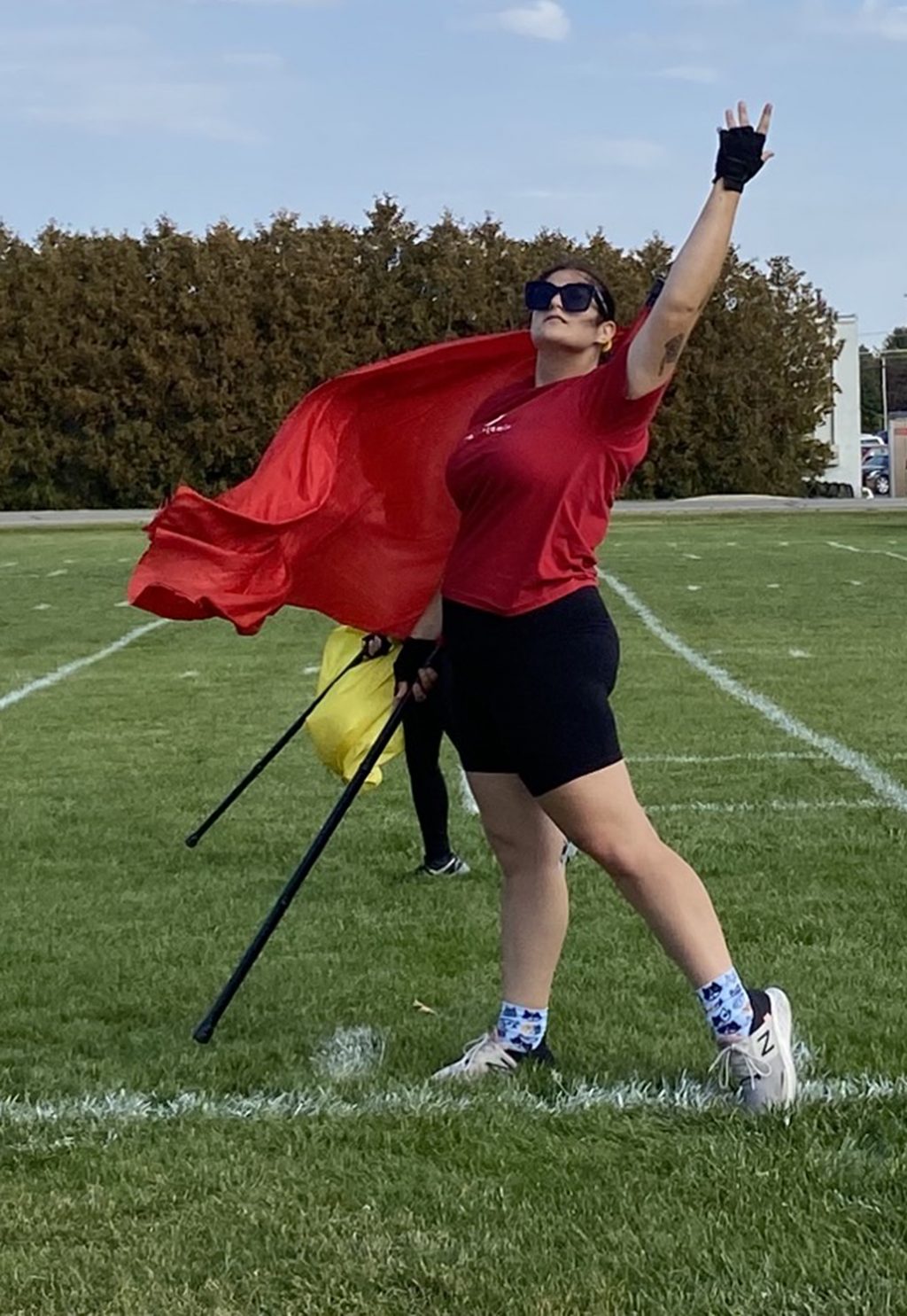 Amy Mitton holds a pose with her flag flapping in the wind during a color guard practice on Oct. 11, 2022 at Jack Saunders Marching Band Field on the campus of Central Michigan University in Mount Pleasant, Mich.

Football games are filled with a variety of sounds. For some it is whistles and the snap of the ball. For others it is the cracking open of a beverage at a tailgate and the cheering of the crowd in the stands. For Amy Mitton it is the flapping of her flag and the happy chatter of some of her closest friends.

Mitton is a Central Michigan University senior and rank captain of the Marching Chips color guard. She joined the group just last fall but has already become close friends with all its members. The relationships she has formed as part of the team have impacted her social life at CMU immensely.

“It’s like a little family we have created,” she said.

​Mitton began doing color guard in middle school with the hope of following in the footsteps of her older sister, who went on to participate in a drum corp after graduating high school. Mitton enjoyed the sport because of the people she bonded with, she said, but also because it appealed to her creativity.

“I’m a creative person and so getting to make my own routines and…working with music is something I really enjoy,” she said.

Mitton found a lot of success in color guard, becoming co-captain of her high school’s team her junior year and head captain her senior year. One of her biggest accomplishments in high school though was in her sophomore year when her team won second place in the state championships.

None of that can compared to what Mitton was able to find at CMU though: a collegiate team much more in her comfort level.

“It feels more in my element,” she said. “I definitely feel more comfortable with what I’m doing and that I’m at the level I wanted to be at when I was in high school.”

​Mitton was able to follow her passion in a number of ways after transferring to CMU from a community college. First was as a part of the Marching Chips where she performs choreographed twirling and dancing along to the music of the marching band.

Mitton also partakes in Metamorphosis, CMU’s  winter guard team that competes in the Michigan Color Guard Circuit. This past season the members dressed in pink, white and gray uniforms to perform an “Artist Formally Known As…” show inspired by Prince. They group won the silver medal in this competition.

Winter guard, as defined by Winter Guard International, is “the world’s premier organization producing indoor color guard, percussion, and winds competitions.” Color guards in WGI use a combination “of flags, sabers, mock rifles, and other equipment, as well as dance and other interpretive movement” when competing.

According to Mitton, members of Metamorphosis pay about $300 each to be a part of the group. The group is fundraising for this year through social media and with a showcase in which audience members will pay to watch    routines created and performed by Metamorphosis participants.

On top of the fall season of color guard and Metamorphosis, Mitton is stepping off on her own to do Drum Corp International. DCI is “the leader in producing events for the world’s most elite and exclusive marching ensembles for student musicians and performers.” Founded in 1971, DCI was formed so directors of competing groups could “unite their corps by providing opportunities to perform together—in the end building a foundation for future success.”

Getting in to a DCI group is no easy task with a series of auditions, including a video and mini camps where a group will either give you call backs or contract you. Mitton is auditioning for the group Madison Scouts in Wisconsin. Her video audition is due November 1, and the mini camps will be November 18-20 and December 16-18.

Mitton chose this group because her friend and current coach, Jacob Keener, participated in it last year.

“I wanted to go to the same group he went to because it was a really beginner group,” Mitton said.

Keener has been helping her prepare by telling her all about what she can expect. She has also been learning by watching videos on Youtube explaining “how to prepare for DCI.”

​“I was thrilled when Amy first told me she was interested about marching drum corps,” Keener said. “Since I just finished my first summer season with the Madison Scouts Drum and Bugle Corps, I have learned how great the overall experience of drum corps is. It is a great environment to grow and explore opportunities that you aren’t able to get anywhere else.

A big part of preparing for DCI though is the cost. The audition and camp are each $75 and the base payment to join the Madison Scouts is $4900. Mitton will also need money for laundry, proper athletic wear and footwear, performance socks, gloves and undergarments, over-the-counter medications and medical supplies, spending money for free days and non-corps meals.

Mitton’s plan to pay for drum corps consists of fundraising and taking out a private loan. Similar to Metamorphosis, she plans to fundraise through social media and Venmo.

Despite the cost, Mitton is excited to participate in her first DCI group who focuses on its motto “You’ll Never Walk Alone.” The Madison Scouts foster “a culture of positivity and inclusivity” and are glad to welcome each member’s “unique personality, experiences, skills, and talents.”

Getting into the group would be a relief for Mitton as she’s worried she won’t be able to accomplish this goal.

“It’s a lot of work and it’s a lot on your body,” she said. “Just last year doing Metamorphosis, it was completely new to me. We did not do anything like that in high school, so it was a huge change. And I know that doing DCI would be (an) even bigger adjustment.”

​All of Amy’s hard work would pay off in the end though as she would reach this high level of competition that she has strived for half of her life.

“Being able to make it onto a team would be huge,” she said. “That I’d be able to uphold that standard that they have.”

​Her fellow guard members and coaches have a lot of faith in her and are excited to see how far she goes.

“I believe that Amy would thrive in the drum corps setting because she loves to push herself and try new things” Keener said. “Amy is a strong member of any color guard she is a part of, and I believe any organization would be lucky to have someone as great as her on their team.

​“I do not see many people as passionate and dedicated as her and I think she will do extremely well in the future.”​

To see more of this project, visit the Flags of Success website.