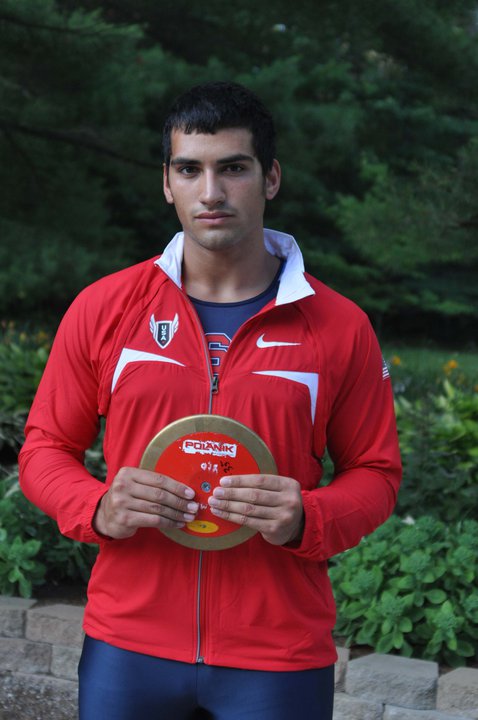 Freshman Alex Rose led the way for Central Michigan University by competing internationally for Team U.S.A. this past summer.

Rose burst onto the scene his freshman year going further than anyone expected him to; including himself. By no means was he a newcomer to winning but competing at the Junior World Championships for Central may have seemed a little far-fetched at the beginning of the season.

“I was a state champion in shot put my senior year,” Rose said. “But I competed at World’s in the discus.”

Rose did not want to sit back and watch the upperclassmen take the entire spotlight. The freshman wanted to make a name for himself early at Central and he did just that.

“I wanted to show that I was ready to compete as a freshman,” Rose said. “I didn’t want to just blend in with the background.”

Discus and shot put were the main events for Rose his first year of competition. He wanted to throw 160 feet in the discus and 52 in the shot put.

“I more than reached my goals my freshman year,” Rose said. “I ended up throwing 181 in discus, and had plenty of faulted throws which were much further. I developed my technique a lot and made sure to focus 100 percent when I was in the (discus/shot put) ring during practice.”

Although shot put was second to discus most of the year, Rose competed like an upperclassmen in the event at the Mid-American Conference Championships. He was the only shot-putter to score for Central at the event.

“Ironically I did end up placing in conference, but in shot put, not discus,” Rose said. “The MAC Championships was the only meet where I triple faulted leaving me with no mark for the meet in discus.”

The star freshman for Central didn’t just stop at the conference meet; he took his skills to the international level.

“My biggest accomplishment was competing in the Junior World Championships,” Rose said. “This meet takes the two best sub-20-year-old track and field athletes from every nation and has them compete on a world-scale. I got into this meet by placing second at USA track and field junior nationals.”

Rose wasn’t extremely happy with his performance but he did overcome many obstacles to get there. Three weeks prior to the meet Rose had a very bad sprained ankle due to a box jump accident.

“I wasn’t able to practice literally until a few days prior to my flight leaving,” confessed Rose. “Although I didn’t place very high at this meet (22nd), I still feel like I threw as far as I could have.”

Rose has many goals left to accomplish on his list including breaking the discus school record held by Chippewa Alum Greg Pilling. He also wants to become a NCAA All-American (finishing only one place out as a freshman) and a national champion.

The most impressive and reachable goal for Rose is to throw an Olympic qualifying distance in the discus during his tenure at Central.

“I think we will accomplish a lot as a team this year,” said Rose. “We have a lot of solid returners who can definitely score a lot of points this next season.

“We also have a lot of freshman who seem very determined to make a name for themselves early,”he said. “We will definitely be the comeback team this year, coming from where we ended last season.”

The team as a whole is also looking up Rose said.

“I completely believe we have a shot at the MAC championship this season.”